ST. JOHN’S — A Bear and a Mouse are the newest members of the Canadian Curling Hall of Fame, it was announced today by Curling Canada. 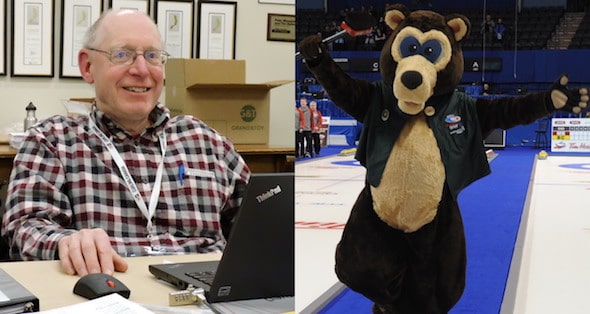 Brian (Mouse) Cassidy, left, and Reg Caughie (aka Brier Bear) are being inducted into the Canadian Curling Hall of Fame. (Photos, Curling Canada)

“The success of Canadian curling events is well-known, of course, but that success goes beyond what takes place on the ice,” said Curling Canada Board of Governors member Scott Comfort, who chairs the Awards & Hall of Fame Committee. “Reg and Brian have offered so much to our championships over the years, even though fans wouldn’t recognize them if they ran into them at the Patch. Reg’s Brier Bear character is beloved by fans and players alike. Brian, meanwhile, revolutionized the idea of curling statistics and brought them to a level where they are now an important tool for coaches, players and media. We were thrilled to be able to welcome them to the Canadian Curling Hall of Fame.”

Here’s a closer look at the two newest Canadian Curling Hall of Fame members — both of whom are being inducted in the Builder category.

One of the most beloved figures in Tim Hortons Brier history, Caughie never threw a rock during a Brier but entertained thousands of fans since his Brier Bear character made its debut in 1981 at Halifax.

Caughie was a member of the host committee for that Brier, and a meeting at his then-home Dartmouth Curling Club produced the idea of a mascot.

It was an instant hit, and he would attend every Brier that followed, culminating with his 37th and final appearance in the costume this week in his adopted hometown of St. John’s. He has announced his retirement as Brier Bear, and with him goes the famous costume.

“To say the least, I was completely floored when Curling Canada chair, Peter Inch phoned to inform me of my impending induction into the Canadian Curling Hall of Fame,” said Caughie. “I am deeply honoured and humbled to be thought of in this manner. I am further grateful to Curling Canada for their continued support and kindness in allowing Brier Bear on an annual basis a most unique and amazing opportunity to rub shoulders with the best curlers in the world and hobnob with officials, media, icemakers, fans, visit hospitals and schools, attend special functions and generally create an atmosphere of fun and camaraderie that enshrouds our great sport of curling.”

Cassidy’s duties at events included co-ordinating a crew of volunteer scorekeepers,  providing them with a set of scoring parameters for shot-calls and results, and putting together in-depth analyses of games that went far beyond the scoreboard. It gave coaches new details on strengths and weaknesses of their players and their opponents, and also provided abundant storylines for media  members covering the events.

For his efforts, Cassidy won the Curling Canada Award of Achievement in 1992, and was appointed to the Governor General’s Curling Club in 1996.

“I am overjoyed to receive this special and very unexpected honour,” said Cassidy. “What this award means to me is the ultimate acceptance by my peers for a job well done. It doesn’t get any better than that and I think this all we can really hope for in life. I am fortunate and blessed to join the incredible list of men and women builders of this great sport of curling.”