BEIJING — It was worth the wait for Rachel Homan and Team Canada.

On a lovely spring day in Beijing, Homan’s Ottawa team ended a lengthy spell of frustration for teams wearing the Maple Leaf, downing Russia’s Anna Sidorova 8-3 in the gold-medal game of the 2017 CPT World Women’s Curling Championship, presented by Ford of Canada. 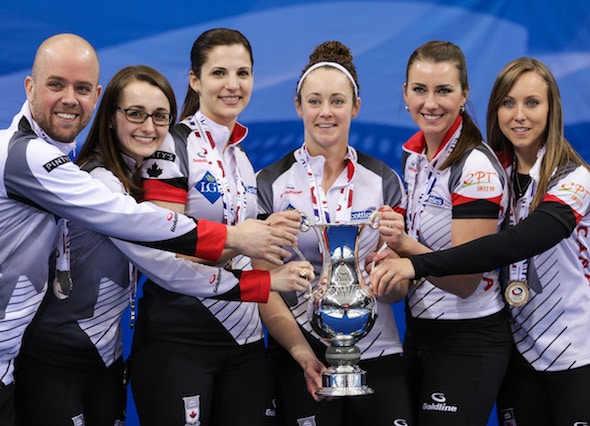 Canada’s most recent gold medal came in 2008 when Jennifer Jones prevailed in Vernon, B.C., and while Homan herself had reached the podium twice in the following years — bronze in 2013, silver in 2014 — the gold medal was what everyone had desired.

As was the right to call themselves world champions.

“It sounds pretty amazing,” said Homan, whose team is rounded out by vice-skip Emma Miskew, second Joanne Courtney, lead Lisa Weagle, alternate Cheryl Kreviazuk, team coach Adam Kingsbury and national coach Elaine Dagg-Jackson. “My team worked so hard for this; we’ve been at worlds now four times (including World Juniors in 2010, where her team won silver) and to finally bring back the gold for Canada, and stop the drought, we’re pretty excited. We really wanted to bring back gold this time, so that we could make a statement going into the Olympic year — no matter who represents us (in 2018) for Canada.” 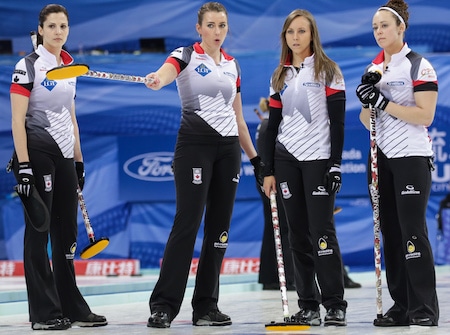 It was an historic victory not just for ending the longest gold-medal drought for Canadian women’s teams (eight years); Homan’s team became the first in the 39-year history of the women’s worlds to run the table, going a perfect 13-0 en route to the gold medal.

But the perfect record was merely a bonus, said Homan, 27.

“We just wanted to bring back gold for Canada, no matter how we had to do it,” she said. “That’s what’s most important, and now we’re going to celebrate.”

It was a textbook game from Homan and Co. against a Russian team that had never won in nine previous meetings in World Championship and tour events.

After an open first end, Canada, as has been the case all week, went hard for multiple points in the second and it paid off. Sitting one in the four-foot, a magnificent sweeping effort from Courtney and Weagle barely dragged Homan’s draw far enough for the key second point to open the scoring.

An end later, two great shots from Homan left Sidorova in desperation mode, and her in-off overcurled and left a steal of a single for Canada to make it 3-0.

After a blanked fourth, Russia finally hit the scoreboard in the fifth with a single.

Then, Canada delivered the knockout punch — a short raise takeout from Courtney put the Russians in chase mode, and when Sidorova’s last-gasp come-around to somehow bury at the back of the four-foot rubbed off  a Canadian stone, Homan made the delicate tap to score three, and the result was never in doubt after that. 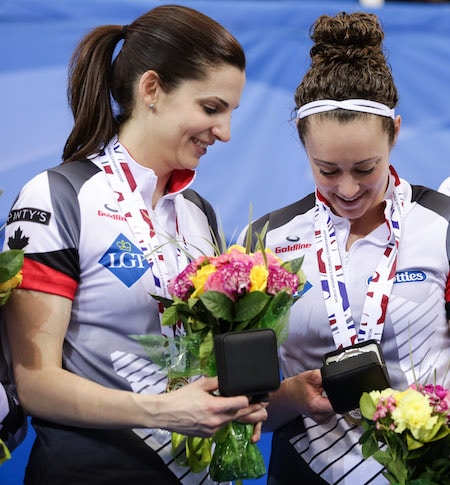 “We just wanted to go out there and keep doing what we were doing (during the round robin) and not think about (what was at stake),” said Miskew. “Because there’s a lot of weight on that gold medal. We just went out there and put the pressure on, and got the misses we needed.”

It was Canada’s leading 16th gold medal at the women’s worlds; Sweden is next with eight and Switzerland is third with six.

“It’s really hard to describe how amazing it feels, to be able to call our team world champions,” said Homan. “I’ve watched the worlds every year since I was eight years old, so to be standing there on the podium and singing O Canada was just an amazing moment.”

While the 2018 Winter Olympics in PyeongChang, South Korea, are still 11 months away, Homan and her teammates established in Beijing that it will be a favourite. But they still have to navigate their way through the 2017 Tim Hortons Roar of the Rings Canadian Curling Trials next December at the Canadian Tire Centre in Ottawa.

“We went into this game thinking this is a great dress rehearsal for next year, having a lot on the line, (feeling) that pressure, coming together as a team,” said Courtney, who wasn’t a part of the Homan team at the 2013 and 14 worlds (she replaced Alison Kreviazuk, Cheryl’s sister, for the 2014-15 season). “It’s certainly motivating going into next season. We’re going to keep our heads down, keep working — we’re pretty pumped right now.”

Earlier on Sunday, Scotland’s Eve Muirhead won the bronze medal in dramatic fashion. Down 4-3 through seven ends to Sweden’s Anna Hasselborg, Scotland stole points in the eighth, ninth and 10th ends for a 6-4 triumph.

The 2018 Ford World Women’s Championship is scheduled for March 17-25 in North Bay, Ont.