Canada rolls past Scots to move to 4-0 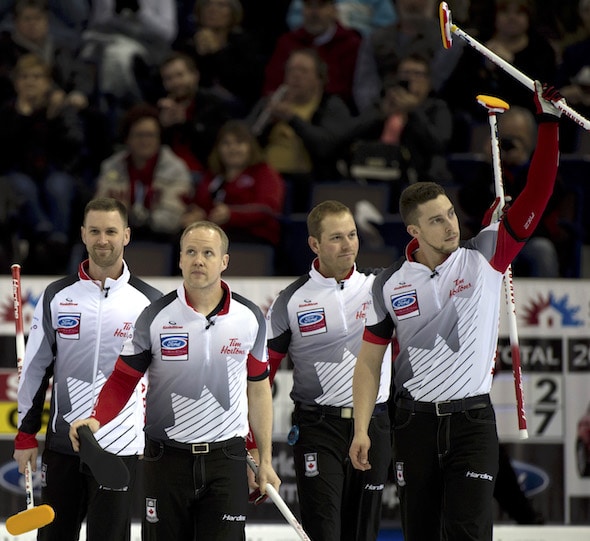 Here’s a scary thought for his opponents here: Gushue thinks his St. John’s, N.L., team still has room for improvement. Gushue, third Mark Nichols, second Brett Gallant, lead Geoff Walker, alternate Tom Sallows, coach Jules Owchar and national coach Rick Lang kept rolling along by dispatching two-time world champion David Murdoch of Scotland 8-2 in seven ends Monday afternoon. The decisive victory improved their record to 4-0 and comes on the heels of a big 8-5 win over Sweden’s Niklas Edin Sunday evening. “I thought our team played really well and kept a lot of pressure on David and got a couple of misses out of him,” said Gushue. “I think we’re in a little bit better form (than at the Tim Hortons Brier), to be quite honest. As you guys’ve seen at the Brier, we struggled the first five games, but here we’re building. I don’t think we’re firing on all cylinders yet, but we certainly like where we are.”

The Gushue gang will face the United States skipped by John Shuster this evening (7 p.m. MT). The Americans are 2-2 heading into the encounter. “They’re a good team,” said Gushue. “We’ve played them a number of times over the years and John can play really well, so we’ve got to be really careful because he’s capable of throwing a 95 per cent game against us. We expect a good game so hopefully we come out and play like we did today.” Gushue did not dispute the assessment his team is playing relaxed. “We’re pretty loose, we’re having a good time. We’re enjoying this opportunity to represent Canada and play in front of the home crowd. It’s obviously awesome. It’s something we’re very appreciative of and we’re just enjoying it. Conversely, it was a disappointing day for Murdoch, third Greg Drummond, second Scott Andrews, lead Michael Goodfellow, alternate Ross Paterson and coach Ian Tetley, a three-time Canadian and world champion. They entered play Monday in a six-way tie for second but following a narrow 9-7 loss to Rui Liu of China and the thorough defeat at the hands of the Canadians, the Scots were 2-3. They’ll be looking to rebound Tuesday when they play Switzerland (3-1) and Netherlands (0-4). “It’s a bad day at the office unfortunately,” said Murdoch. “It’s always going to be tough against Brad’s team. We were unlucky against China. We played really well against those guys. We were a little bit flat this afternoon. That was the end of four games back-to-back. We need to just rest up and focus on the rest of the games. We’re still throwing it good.” The Scots were chasing Canada from the start, giving up two in the first end and falling behind 7-1 after five. “Against these guys, one of the best teams in the world you need to have position a few times and make them play a bunch of shots, and we didn’t do that. We left the fairly simple shots and then you’re really pushing hard to generate twos and sometimes you get yourself in more trouble trying to do that,” said Murdoch.

The Japanese fans have been enjoying themselves in Edmonton. (Photo, Curling Canada/Michael Burns)

In other action on Draw 7, Edin executed a double takeout with his final throw as Sweden beat Yusuke Morozumi of Japan 8-5. That left Sweden all alone in second place with a 4-1 record. Japan is 2-2. China, meanwhile, rolled past Jaap van Dorp of Netherlands 9-3 in six ends. Norway’s Steffen Walstad joined China with a 3-2 record after defeating Russia, now skipped by Alexey Timofeev, 5-3. The Dutch and the Russians are both 0-4. Besides Shuster’s United States squad, other teams with the seventh draw off were Switzerland (Peter de Cruz, 3-1), Italy (Joel Retronaz, 2-2), and Germany (Alexander Baumann, 1-3). The Ford Worlds continue Monday with a draw at 7 p.m. For ticket and other event information, visit httphttps://www.curling.ca/2017worldmen/ This story will be posted in French as soon as possible at https://www.curling.ca/2017worldmen/?lang=fr TSN (RDS2 in French), the exclusive television network for Curling Canada’s Season of Champions, will provide complete coverage of the 2017 Ford Worlds.