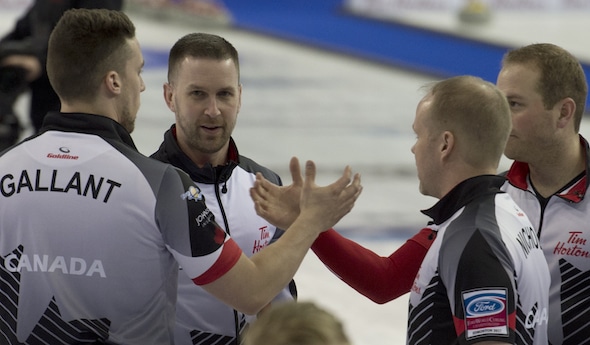 The victory left the squad from St. John’s, N.L., as the only team at 3-0 in the 12-country field while Sweden dropped into a six-way tie for second at 2-1. Sweden had a 4-2 lead at the fifth-end break, but Gushue got two in the sixth, eighth and ninth ends for the victory. “I thought the last four ends our team played really good and really controlled the game. I was very impressed at how we came together after being down 4-2 after five,” said Gushue. Sweden and Canada came into the competition as co-favourites, so Gushue could have been forgiven if he had the Sunday night showdown circled on the schedule.

“Any time you play Niklas, they’re one of the best teams in the world, you’ve got to play well,” said Gushue. “When I looked at the schedule I knew the first three days were tough. You had all the guys that are going to be in playoff contention with Scotland and the U.S. (Monday) and Switzerland (Saturday) and Sweden. To be 3-0 now we’re in good position.” Now it’s up to Edin and Co. to rebound from the loss. “I like the start we had, we played well with hammer,” said Edin. “We were all over them the first five (ends), but then we dropped our game and they upped theirs a bit. We were leaving them a few too many chances.” Gushue overcurled his last shot in the first end, allowing Edin an open path to the button to score two. Gushue rebounded in the second by splitting the house, thanks to a soft hit-and-roll by third Mark Nichols, to score two to tie the game. After a blank third end, Canada split the house again in the fourth and appeared to be on its way to forcing Sweden to take one. But Gushue came up light on a freeze and Edin had a draw for two to go up 4-2. Canada managed to get those two back in the sixth when Edin’s double takeout attempt only took out one allowing Gushue to draw in for his pair.

“I thought Niklas’s team played really good in the first six ends and we got lucky to make a good draw and to have him miss one to get a deuce there. I kind of gave him one too in the fourth coming up light,” said Gushue, who along with Nichols was supported by second Brett Gallant, lead Geoff Walker, alternate Tom Sallows, team coach Jules Owchar and national coach Rick Lang. Gushue forced Edin to take one with the final shot of the seventh  after a soft takeout left Canada sitting two. With lots of rocks in play in the eighth, Edin tried to bomb his way out of trouble but Gushue ended up taking the lead 6-5 by picking up a pair with a final rock takeout. In the ninth, Canada had rocks socked in behind cover that Sweden kept trying to remove all end. At last-gasp wick attempt by Edin failed to work and Gushue stole two for a winning lead of 8-5. Edin disagreed the game was lost with Gushue’s steal of two in the ninth but earlier on. “It was the sixth end that killed us,” said Edin. “We were in good shape there and a bad miss with my last otherwise we win the game.” Veteran Scottish skip David Murdoch, meanwhile, knocked Japan’s Yusuke Morozumi from the ranks of the unbeaten with a 7-4 win. Both teams are 2-1, tied with Sweden, Italy and Norway for second place. In other action, Norway’s Steffen Walstad scored an 8-3 seven-end victory over Jaap van Dorp of Netherlands that dropped the Dutch to 0-3. In a battle of winless squads, China’s Rui Liu broke a 5-5 tie with a big four in the eighth end to defeat Russia 9-6. China is 1-2. Russian third Alexey Timofeev took over skipping duties, swapping spots with Alexey Stukalskiy. The move, however, didn’t prevent Russia from falling to 0-3. Italy (Joel Retornaz, 2-1), United States (John Shuster, 1-2), Switzerland (Peter de Cruz, 2-1) and Germany (Alexander Baumann, 1-2) did not play in Draw 5. The Ford Worlds continue Monday with draws at 9 a.m., 2 p.m., and 7 p.m. For ticket and other event information, visit httphttps://www.curling.ca/2017worldmen/ This story will be posted in French as soon as possible at https://www.curling.ca/2017worldmen/?lang=fr TSN (RDS2 in French), the exclusive television network for Curling Canada’s Season of Champions, will provide complete coverage of the 2017 Ford Worlds.