LETHBRIDGE, Alta. — An early morning wakeup didn’t hamper the two Canadian teams who were on the ice Monday morning at the World Mixed Doubles and World Senior Curling Championships in Lethbridge. 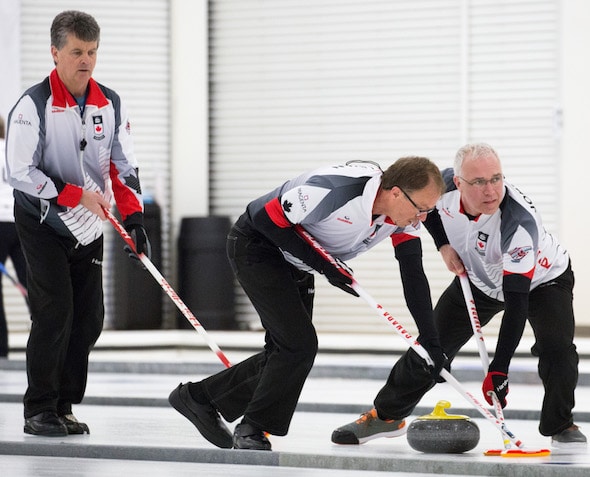 In mixed doubles play at the ATB Centre, Edmonton’s Joanne Courtney and Winnipeg’s Reid Carruthers piled up a 14-0 victory over Kazakhstan’s Diana Torkina and Viktor Kim to improve to 3-0.

Meanwhile, a few metres away at the Lethbridge Curling Club, where the World Seniors are being played, Bryan Cochrane’s Ottawa team cruised to a 10-2 victory over Russia’s Igor Minin to remain unbeaten at 2-0.

Canada’s mixed doubles team, coached by Jeff Stoughton, was never threatened by the winless Kazakhs. Courtney’s draw for two in the first end started the ball rolling, and the Canadians never let up. The following five ends saw Courtney execute the all-important first-rock freeze  to perfection to set up steals of three in the second, one in the third, three in the fourth, two in the fifth and three in the sixth to officially put the game out of reach.

“Once we stole the three points in the second end, then the game was probably going to go in our favour, the way we were throwing and a little bit of a less experienced team,” said Carruthers. “Jo played really well, too.”

Canada remained in a three-way tie for first place in Group D with Matt and Becca Hamilton of the United States and the Czech Republic pairing of Zuzana Hajkova and Tomas Paul.

With those teams still remaining on the round-robin docket for Canada, it was important to maintain focus against Kazakhstan, said Courtney.

“We wanted to come out and play well this morning, and we’re happy that we were able to do that,” she said. “At this point in the week, getting to throw tons of draws, dialling in that first-rock freeze and being able to play the touch-weight shots, it’s great to get out there and play well, regardless of the score.”

Canada is back in action later Monday with a showdown against the Czechs set for 5:45 p.m. (all times MT) that can be viewed on the World Curling Federation’s Youtube channel (www.youtube.com/user/WorldCurlingTV). 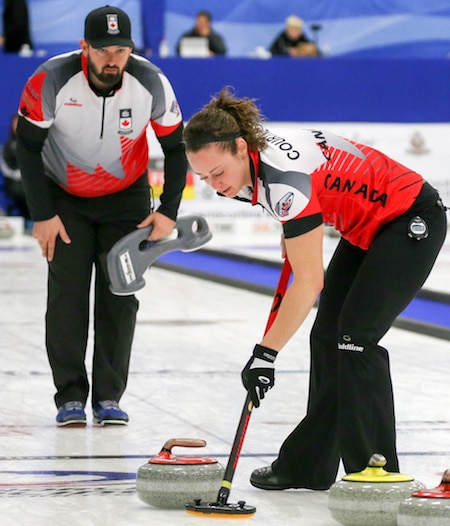 “They look like a great team,” assessed Carruthers. “I’ve watched some of their shots and they definitely know what they’re doing, and we’ll have to play really well to beat them.”

Meanwhile, the Canadian senior men took a first-end deuce, added a steal of three in the second end and never looked back in dispatching the Russians.

“I like the focus that we’re bringing from the practice right into the game,” said Cochrane. “I really can’t recall us being so sharp, so early, in quite a while. It’s the practice, the excitement of drawing to the pin, because it’s not only for first-end hammer, but also because it goes towards the tiebreakers at the end. And I think that focus in practice is carrying on into the game, which I feel is positive for us.”

Canada is back in action at 4:30 p.m. Monday against Scotland’s Ian Drysdale (2-0) in an early showdown of Group C leaders that will likely feature more of the style Cochrane and Co. are used to facing at home in Ottawa.

“It’s interesting in that against most competitive teams that we play back home, you’re right into it, right off the bat,” he said. “But here, you’re a little tentative, just to see how they’re going to throw it, and what their strategy is going to be; it’s a little different than what we normally see. And here in the first end this morning, we got off to a little bit of a shaky start, and the other team made five shots in a row. We were really fortunate to get a two in the first end, and then it turned around.”