Alberta’s Jack Smart came out firing on Wednesday and stole his way to two big wins, moving up in the standings at the 14th Canadian Wheelchair Curling Championship at the Club de curling Boucherville in the Complexe sportif Duval Auto in Boucherville, Que. 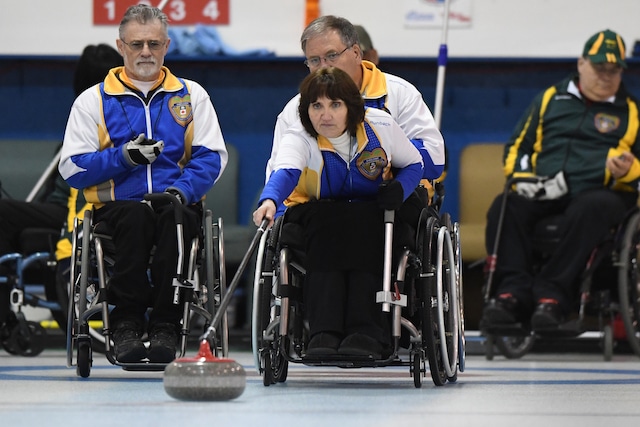 Smart and his Calgary Curling Club team of third Bruno Yizek, second Martin Purvis, lead Anne Hibberd, alternate Wendy Frazier and coach Ernie Comerford handed Quebec’s Benoit Lessard his first loss of the round robin on Wednesday morning, stealing four straight ends on the way to a 6-1 win. Alberta kept the momentum going in Draw 5 with a steal of five against British Columbia’s Gerry Austgarden in the first end. Austgarden wasn’t able to catch up and the game ended early with an 11-1 win for Alberta, who move into a three-way tie for first place with Quebec and Ontario, all with 4-1 records. Ontario’s Mike Munro suffered his first loss of the competition, to Quebec’s Lessard, who bounced back in the afternoon draw. Lessard scored a single in the first end, then went on to steal every end – including six points in the seventh – for a 13-0 win. Working hard to stay close to the leaders, Saskatchewan’s Gil Dash scored a single in an extra end to defeat Manitoba’s Dennis Thiessen 6-5. The win means Saskatchewan is now tied with Manitoba in the standings, 3-2. In other games, Newfoundland and Labrador’s Cecilia Carroll stole a single in the final end to defeat Northern Ontario’s Doug Dean 6-4, while New Brunswick’s Mike Fitzgerald scored three in the eighth on the way to an 8-5 win over Nova Scotia’s Trendal Hubley-Bolivar. The round robin continues on Thursday at 11 a.m. and 4 p.m. (all times EDT) Scores, standings and team information can be found on the event website, at www.curling.ca/2017wheelchair/. 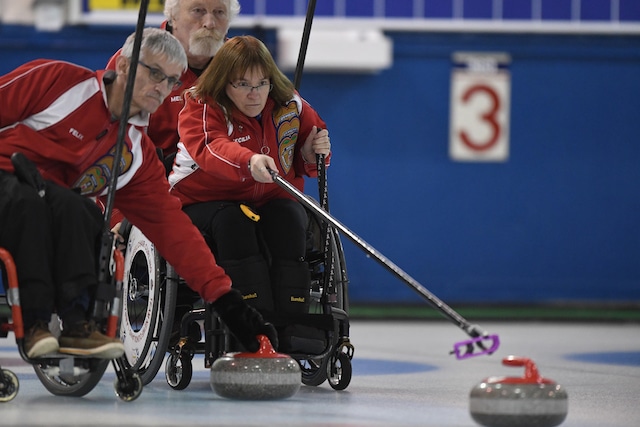