Team Ménard picks up victory to open Road to the Roar

SUMMERSIDE, P.E.I. — It was an early wakeup call, but it was hardly a problem for Jean-Michel Ménard and his teammates. 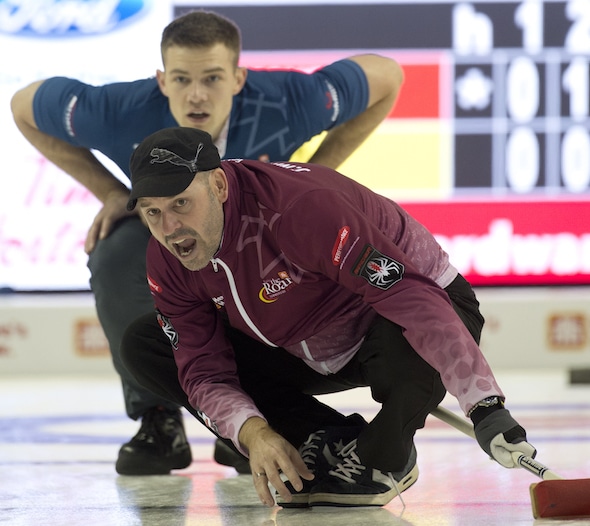 The former Tim Hortons Brier champs from Saint-Romuald, Que., opened the 2017 Home Hardware Road to the Roar Pre-Trials on a winning note Tuesday morning at Credit Union Place with an 8-5 win over Edmonton’s Brendan Bottcher; it was the first round-robin game for both teams.

“We like morning games; oh, yeah, we love morning games,” he said with a smile “Well, it’s basically the time I wake up for work during the week, so it was just a regular wake-up call for me.”

Ménard, 41, and teammates third Martin Crête, second Éric Sylvain, lead Philippe Ménard (Jean-Michel’s brother), alternate Pierre Charette and coach Bob Ménard (Jean-Michel and Philippe’s dad) have a well-earned reputation for getting better as a round-robin schedule goes on, and being extremely tough to beat late in the week.

So opening with a victory could mean this team will be in the mix at the end, as it will only get better.

“It’s something we were looking for early in the tournament, to get off to a quick start, and get comfortable as soon as possible with the ice conditions,” said Jean-Michel Ménard. “And I think we were able to accomplish both things.”

The team made the trip to Summerside over land, making the 10-hour drive from Quebec City on Sunday; naturally, the skip didn’t have to do any driving.

“Martin and Phil split the driving; I was in the back seat enjoying music and relaxing,” said Ménard with a laugh. “Either that’s the privilege of a skip or they don’t like my driving.”

In the lone women’s game, Winnipeg’s Darcy Robertson evened her record at 1-1, stealing the winning point in the 10th end for a 7-6 triumph over Krista McCarville (0-1; Thunder Bay, Ont.).

The Home Hardware Road to the Roar is the final qualifying event for teams to teach the Tim Hortons Roar of the Rings, Dec. 2-10 in Ottawa, where Canada’s four-player curling teams for the 2018 Winter Olympics in Pyeongchang, South Korea, will be decided.

The 2017 Home Hardware Road to the Roar continues on Tuesday with draws at noon, 4 p.m. and 8 p.m. (all times Atlantic).