SUMMERSIDE, P.E.I. — Four teams are a step closer to the promised land; AKA the 2017 Tim Hortons Roar of the Rings next month in Ottawa. 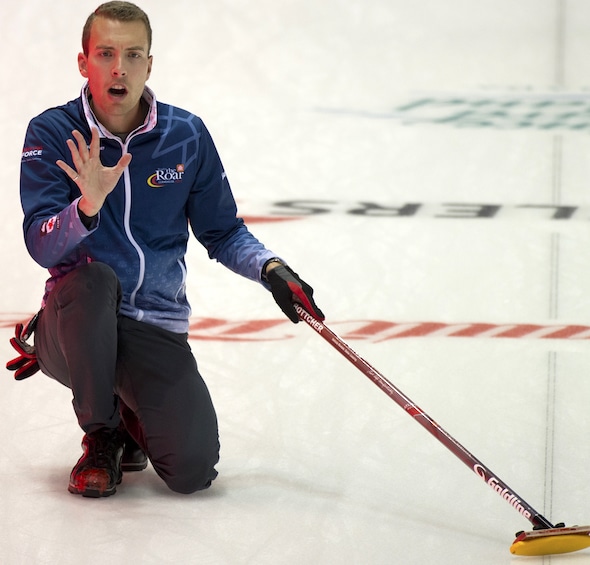 Brendan Bottcher won his A-side semifinal on Saturday against Glenn Howard and will play Sunday morning for a berth into the Tim Hortons Roar of the Rings. (Photo, Curling Canada/Michael Burns)

Edmonton’s Brendan Bottcher and John Morris of Vernon, B.C., on the men’s side, and Briane Meilleur and Krista McCarville of Thunder Bay, Ont., on the women’s side, won their A-side playoff openers Saturday afternoon at Credit Union Place at the 2017 Home Hardware Road to the Roar Pre-Trials, and will play in the first qualifying games that will decide berths into the Tim Hortons Roar of the Rings.

Meilleur and McCarville will battle on Saturday at 7 p.m., while Morris and Bottcher will meet Sunday at 9 a.m., with the winners booking their tickets to Ottawa; the losers will get another shot in the B-side finals on Sunday.

Bottcher, backed up by third Darren Moulding, second Brad Thiessen and lead Karrick Martin, played a conservative first few ends against the unbeaten Glenn Howard of Etobicoke, Ont., with Howard blanking the first two ends and taking one in the third before Bottcher, the 2012 World Junior Men’s champ, blanked the fourth.

In the fifth, though, Bottcher turned up the pressure and it paid off with a game-turning four-ender, and he never looked back.

“I wanted to start off a little slow, make sure that the guys and me felt relaxed and comfortable; that’s why the first three or four ends were a little on the light side (for rocks in play),” said Bottcher. “But when I felt like we were feeling it, that we were settled, we turned up the offence a little bit. We made a lot of good shots in the fifth and got some half-shots from them. But those guys are one of the best teams at keeping rocks in play and getting good angles, so we definitely had to finish that game out.”

Bottcher’s team went 3-8 as Team Alberta at the 2017 Tim Hortons Brier last March in St. John’s, and may have been considered the underdog against one of the best skips in curling history. But Bottcher didn’t disagree with the suggestion that his team made a statement with its win over Team Howard.

“I think we actually made a statement to ourselves, too,” he said. “We went 3-and-3 (in the round robin), and I actually thought we were playing pretty well but ended up on the wrong side of a couple breaks, lost a couple where the teams played really well against us. So this was big for us to come out and play well, feel like we dominated and actually put a good win on the scoreboard.

“We need to come out (Sunday) and just individually relax and play well. (Getting the berth) really doesn’t factor into the equation; we’re just trying to win a bonspiel right now.”

Both Team Howard and Team Thomas drop to B-side quarter-finals on Saturday night; Howard will play Winnipeg’s Jason Gunnlaugson at 7 p.m., while Thomas is up against the winner of a tiebreaker between Greg Balsdon of Kingston, Ont., and Dayna Deruelle of Brampton, Ont., at approximately 8:30 p.m.

In the women’s playoff games, Meilleur, vice-skip Breanne Knapp, second Janelle Vachon, lead Sarah Neufeld and coach B.J. Neufeld fell behind 4-0 after three ends, but rallied with one in the fourth, a stolen two in the fifth and a stolen three in the sixth in a 7-5 win over Julie Tippin of Woodstock, Ont.

Tippin plays Calgary’s Nadine Scotland in the B-side quarter-finals Saturday at 7 p.m., while Rocque plays Sherry Middaugh of Coldwater, Ont., in the other quarter-final.