SUMMERSIDE, P.E.I. — They’ve been loud and proud all week long, but the Team Tippin supporters saved their loudest cheers for Sunday afternoon at Credit Union Place. 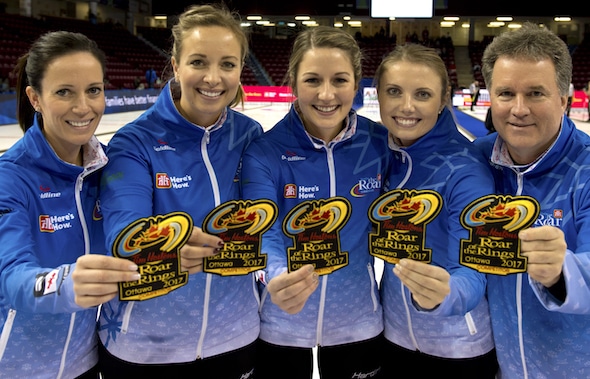 Perched in one of the arena skyboxes, the friends, family members and sponsors of Julie Tippin’s team from Woodstock, Ont., had much to cheer about as Team Tippin clinched the last women’s berth into the 2017 Tim Hortons Roar of the Rings next month in Ottawa.

Tippin, backed up by vice-skip Chantal Duhaime, second Rachelle Vink, lead Tess Bobbie and coach Barry Westman, capped a brilliant day of curling with an 8-3 win over Winnipeg’s Briane Meilleur in the women’s B-side final of the 2017 Home Hardware Road to the Roar Pre-Trials.

That will send Team Tippin to Ottawa as the ninth women’s team — all of whom will be playing for the right to represent Canada at the 2018 Winter Olympics in Pyeongchang, South Korea.

“We’re so happy at how we played today in both games; we just came out firing,” said Tippin, 34. “We just needed to keep focused; we had played great throughout the week and we knew that we just needed to come out and play our best, focus on every shot until the end, and we did.”

Tippin was on fire all day; earlier, in the B-side semifinal, Tippin was scored at 89 per cent as her team piled up an 8-5 win over Edmonton’s Kelsey Rocque.

Against Meilleur, it was more of the same as Tippin checked in at 88 per cent, while Vink was a perfect 100 at second stone.

“There were some scary moments in that game, for sure, and I think we got a little lucky at times, and we ran with it,” said Tippin, who took advantage of Team Meilleur misses to steal one in the fourth end and two more in the fifth to take control. “We were relieved that we didn’t give up a big end.

“The pressure was high, and I think we were a little nervous, but I think we just kept focusing on taking it one shot at a time, doing all the small things, keeping our communication open, and I think our nerves just melted away as we started to play.”

While her younger teammates are relative newcomers to the national stage, Tippin has a level of comfort; she’s a former Canadian mixed champion, in 2006 playing third for John Epping, and also skipped Ontario at three Canadian Junior Championships — that experience may have played a role in settling down her young teammates.

Meanwhile, in men’s play, four-time Brier and world champ Glenn Howard and his Etobicoke, Ont., team advanced to the B-side final with a 7-6 extra-end triumph over Greg Balsdon of Kingston, Ont.

Howard moves into the final game of the 2017 Road to the Roar, the men’s B-side final against Edmonton’s Brendan Bottcher, with the winner joining A-side winner John Morris of Vernon, B.C., in the men’s field at the Tim Hortons Roar of the Rings.