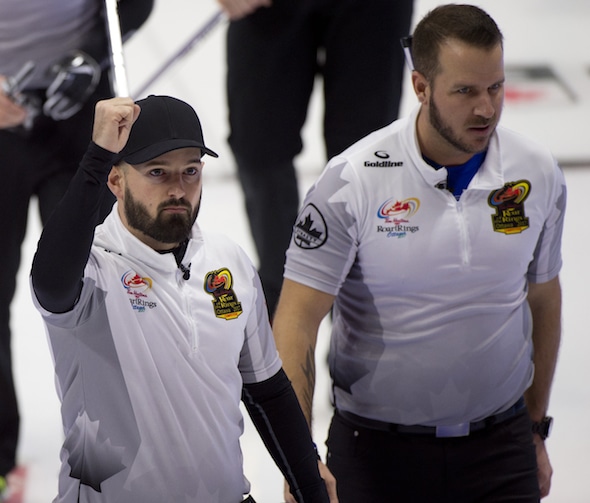 “We might have to throw it on in the van on the way back to the house,” joked Carruthers after he, third Braeden Moskowy, second Derek Samagalski, lead Colin Hodgson, alternate Craig Savill and coach Dan Carey got themselves back in the hunt for a playoff spot at the 2017 Tim Hortons Roar of the Rings with a 4-3 record thanks to their 9-5 win over Jacobs. Team Carruthers is fourth in the nine-team round-robin behind Kevin Koe of Calgary (6-0), who has already clinched a playoff spot, and Brad Gushue of St. John’s and Mike McEwen of Winnipeg at 4-2. Koe needs just one win to clinch first place and a spot in Sunday’s men’s final. The second- and third-place teams will play a semifinal Saturday. “If we get to 5-3 we might have a sniff, but there’s some real good teams that have to lose,” said Carruthers, whose team lost its first two games this week. “All of our games have been really close. We had some chances in the games we’ve lost and we got some breaks, especially in that game. “For us, we’ve just got to battle it out, grind it out. We said before the start of the week that it’s not going to be easy out here with all these good teams.” Carruthers’ last game is on Friday’s final draw against Brendan Bottcher of Edmonton, who is currently 2-3. Koe and Gushue also play on that draw. “We’ll know we’ll be playing for something in that last game,” said Carruthers.

It took an extra end, but Winnipeg’s Michelle Englot picked up her second victory of the Tim Hortons Roar of the Rings on Thursday morning. (Photo, Curling Canada/Michael Burns)

The long break allows them to do a couple of autograph sessions and also have a big dinner with all the family, friends and sponsors that have formed a significant cheering section at all of the team’s games. Many of them carry huge cardboard cutouts of the players’ faces. “We’ve got a reservation for 40, so there’s a lot of people. Do you want me to name them all?” said Carruthers. The loss was a huge blow to Team Jacobs’ hopes to defend its title at the 2018 Winter Games in Pyeongchang, South Korea. “We just didn’t execute today. The ice was great. There’s no excuses. We just came out here knowing our fate was in our own hands and we didn’t perform,” said Jacobs, who chuckled when he was asked if he was disappointed. “Yeah, I’m disappointed. Even though I’m laughing I am disappointed because I know we’re so much better than we were this week.” The key end was the fourth. With a pile of Carruthers’ red rocks in and around the button, Jacobs tried a freeze with his last shot and came up short allowing Carruthers to draw in for four. “We had chances, and just didn’t execute and as a result we gave up four and that’s a huge momentum swing,” Jacobs said. “We fought back to 7-5, but when things are going you’re way they’re just not going your way. We could have forced them in (the seventh) end to maybe hang in there, but we gave up another deuce (in the eighth). The rock slides like an inch too far. Story of our week, man.” Jacobs, third Ryan Fry, second E.J. Harnden, lead Ryan Harnden, alternate Pete Steski, and coach Caleb Flaxey play McEwen tonight and John Epping of Toronto (1-4) Friday afternoon to close out the round robin. Flaxey returned to the Canadian Tire Centre on Thursday morning after missing a few days to due complications from his recent hip surgery. When Jacobs asked the media if the loss eliminated the team from the playoff picture, he was told that wasn’t the case, but some scoreboard watching would be required. “Oh, c’mon. We’re not out of our misery yet are we? I guess we’ll have to keep trying.” In the only other game on the morning draw, Michelle Englot of Winnipeg edged Allison Flaxey of Toronto 8-7 in 11 ends to improve to 2-4. Flaxey is winless in seven games. The 2017 Tim Hortons Roar of the Rings continues with draws today at 2 p.m. and 7 p.m. (all times EST). Live scoring, standings and statistics for the 2017 Tim Hortons Roar of the Rings are available at www.curling.ca/scoreboard/ TSN/TSN2 and RDS2 will provide complete coverage of the Tim Hortons Roar of the Rings. CLICK HERE for the complete schedule For ticket information for the 2017 Tim Hortons Roar of the Rings, CLICK HERE. This story will be posted in French as soon as possible at www.curling.ca/2017roaroftherings/?lang=fr