A curling powerhouse from behind the scenes: David Beesley

You won’t find David Beesley’s name in any newspaper articles or see him interviewed on television about his role in curling.

Ask a general curling fan who he is and they will invariably answer: “I dunno.” 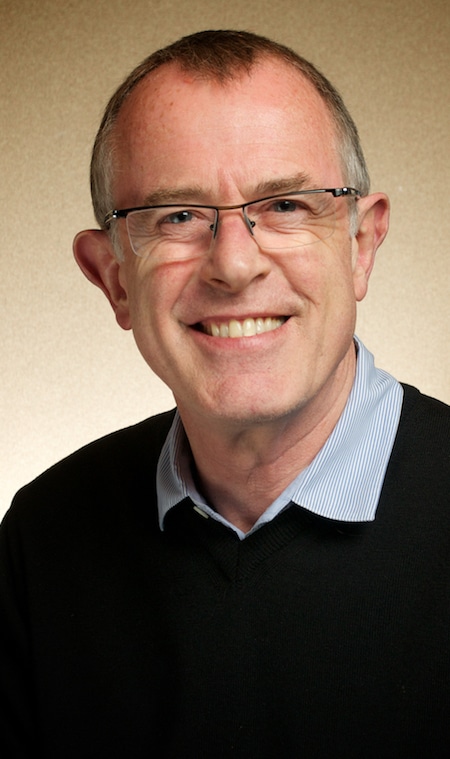 Funny, isn’t it, how some of the most influential people in most walks of life, whether it’s business, industry, politics or sports, are often the least recognizable?

Curling has its high-profile people, of course, but it is also the domain of special people, largely unseen and unsung, who make the game prosper. Their work is critical, and perhaps few in curling have been as important working in the background than Beesley. In fact, a case can be made that he is one of the most influential non-athletes in Canadian curling.

Don’t think so? Well, the next time you watch a Tim Hortons Brier or Scotties Tournament of Hearts — or any of the Season of Champions events over the winter — and see how it is marketed, packaged and sold to the public as first-class, professional event, on the ice and on TV, think of Beesley. His fingerprints are all over it.

“Many who have curled in clubs and on the world stage will not have heard of David,” said Katherine Henderson, CEO of Curling Canada, “but he is truly a giant in both world class and community sport.

“David is able to understand that a curling business model needs to be based on the values that curlers hold dear. He is a holistic thinker that understands powerful relationships between fans, supporters, our business and marketing partners and our employees.”

Beesley didn’t find curling. Curling found him. The Canadian Curling Association (now Curling Canada), struggling to stay relevant in a Canadian sports market dominated by pro hockey, baseball and football, signed a marketing rights deal with the St. Clair Group in Toronto in 1992. The CCA needed help. But change couldn’t happen overnight. A lot of work had to be done to prepare curling to go big time in marketing terms. Initially, it had to be evolution, not revolution, in order to get all of curling’s constituencies onboard.  The ball really didn’t get rolling for more than two years, after a lot of groundwork was laid.

Warren Hansen, the long-time director of event operations for Curling Canada, said bringing in the St. Clair Group was critical because in the late-Eighties sponsorship for curling was changing dramatically. It no longer was all about goodwill and community support.

“It became more of a business,” said Hansen. “If you were going to put money into sponsorship, you had to see a marketing return. It was simple as that.”

The CCA brass came in contact with a talented number of men and women at the St. Clair Group who were strongly sports-based and would eventually lead them out of the wilderness; people like John Dunlop, Tom Murray, David Thom, Brian Seater, Harry Littler and others. They were all behind many of the business, marketing and television decisions that helped the game flourish and grow financially.

But it was Beesley who would emerge as the curling “guru” and the chief architect of the CCA’s more marketing focused push to sell its events.

Beesley, who joined the company in 1992 as marketing director, had a media/market planner/research background, working for the larger agencies in Toronto as well as extensive sale experience. He was a good fit with the St. Clair Group right from the start.

But his best fit was with curling, a portfolio he settled into almost immediately. He was a natural. His easy-going, self-effacing personality meshed perfectly with the ideals of the sport.

It was a strange marriage. On one side you had the established old guard in curling, many resistant to the changes that Hansen and a few others of curling’s incumbent leaders recognized were necessary, and on the other side a group of people who didn’t know a whole lot about the game, like Beesley, but was charged to move it into the next phase.

It wasn’t easy for anybody, especially Beesley, a Brit who came to Canada as an ad agency transfer and much preferred the game of darts and fast cars to curling. He was somewhat naive at the beginning, as they all were, but immersed himself into the sport to understand what it meant to Canadians.

He got a crash course early on dealing with curling’s ruling bodies. The St. Clair Group had to confront the fact that curling had never taken itself seriously as a media property, and set about to change that.

One of the first things the company did was to create the Season Of Champions that committed it to providing dramatically expanded television coverage of the then seven national and international annual championships under the stewardship of the CCA and the World Curling Federation (WCF), with which the St. Clair Group also had a marketing agreement.

In order to generate the significant financial support from sponsors and advertisers that this required, the team at The St. Clair Group, working with key people at both the CCA and the WCF, decided to completely dissect the sport, piece by piece. Ultimately, it resulted in a report with more than 100 recommendations that focused on maximizing the commercial value of the sport. It was then pitched to the CCA and WCF. 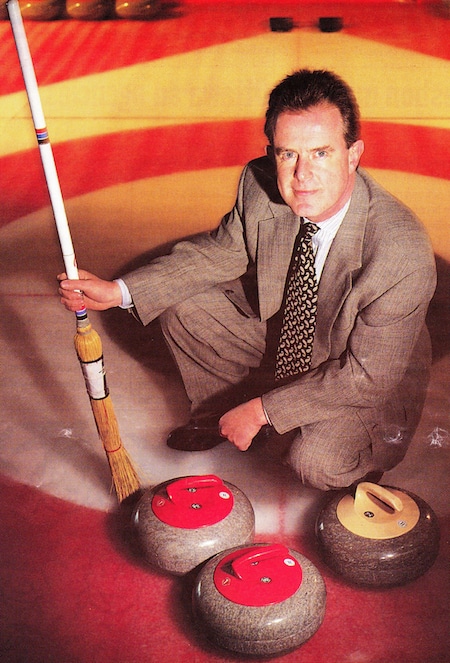 David Beesley in the early days of his involvement with the sport of curling.

Beesley was made point man for the report.

“When I brought him into the picture to handle this report,” said Murray, “it immersed him (into curling) and gave him an intense understanding of the sport that few of us in the company and marketplace had.”

It was frustrating at times. There was a fair amount of head-butting. And Beesley was right in the middle of it, selling his and his colleagues’ ideas. But he was well suited for the job.

The St. Clair Group also realized early that the CCA’s and WCF’s properties were extremely undervalued. Much of the value created was in the bundling of all the major events under the Season of Champions banner. Advertisers could be involved with curling across all seven events and be part of a package that turned the curling properties into a first-quarter media buy.

Where they once pulled in very little revenue for an event like the Brier, the St. Clair Group pegged it alone as a million-dollar property, which was unheard of at the time.

Beesley had a grasp on the economics of the sport almost immediately.

“David was a pivotal part of that research, to professionally measure the value,” said Murray.

Murray, who followed Dunlop’s advice and hired Beesley, worked with him for years and recognizes that he is an anomaly in the marketplace.

“Most sales guys are driven to close and then go on to the next sale.” said Murray. “David’s personality is different. He understands that the work only starts when the initial sale is made.  He’s a mature and very sociable guy. He didn’t approach curling like the cliché loud, boisterous salesman. He came in as a calm, level-headed, knowledgeable guy saying to the client: ‘I can understand and meet your needs and this is how we’re going to do it.’ He can sit beside a client, not offend them and understand the client’s needs often better than the client.

“When you partner that personality with his research knowledge and marketing acumen, you’ve got an incredible package.”

Thom, who worked in sales with the St. Clair Group, said curling lent itself to Beesley’s strengths which were sales and marketing.

“He’s a very intelligent individual in regard to all aspects of advertising and connecting to consumers, curling fans, curling clubs and sponsors and how to bring all that together,” said Thom, who now runs his own sports marketing company,  Thom Partners Inc. in Toronto.

“He had a major impact on the financial viability of the CCA over the last 10 to 15 years,” said Hansen.

Perhaps Beesley’s greatest strength is his ability to listen, often to strenuous arguments against his and his colleagues’ advice, and never get upset. Negotiations don’t always go smoothly but Beesley blends compromise with friendship (many of the people he worked with are now friends).

The proposal to put in-ice advertising on the sheets, for example, met with initial opposition from ice-makers who claimed that the colour would draw heat from the overhead lights and change the temperature of the ice.

But Beesley never flinched. In typical fashion, he went to work with Hansen to research the issue. They laid out a sheet, put all the signage in, and proved there was an insignificant and manageable change in the temperature of the ice surface.

“David going to meetings with curling’s old guard was kind of comical at times,” said Murray. “There were a lot of larger-than-life characters who under estimated his calm approach but he won them over and got results.”

Today, in-ice signage is everywhere, as is advertising on bumpers, rink boards, scoreboards, and throughout the curling venue. And the number of broadcasting hours has grown exponentially.

“From a starting point of not knowing a lot about curling to becoming the kind of expert he became, is remarkable,” said Murray. “David ended up leading the charge for dramatic marketing change while respecting and maintaining the integrity of the sport.”

The St. Clair Group was eventually sold to The Score Network in 2003, and would eventually wind down, but Beesley and Dunlop took over the sponsorship sales and fulfilment roles as the Canadian Sponsorship Group, contracted by the CCA, and now Curling Canada.

Dunlop died in 2008 leaving Beesley and Dunlop’s daughter Catharine to carry on the good work to this day, working closely with CSG Manager of Client Services Marylou Morris.

Today, Curling Canada’s Season of Champions events are big-time attractions, both in the cities that host them, and on television, where some broadcasts outnumber the NHL in viewership. And in a hockey-crazed country like Canada, that’s astounding.

Beesley is hardly singularly responsible for the success of curling on television, or the events themselves, but he is a very big piece of the orderly growth of the sport, which is now in the Olympics.

And he did it all from behind the scenes which is perfectly in keeping with his makeup.