PORTAGE LA PRAIRIE, MAN. — Brad Gushue (St. John’s) isn’t used to having someone throw the last rock for him. But Val Sweeting (Edmonton) has been doing just that for him this week and it’s earned them a spot in the 2018 Canad Inns Canadian Mixed Curling Trials final. Sweeting and Gushue defeated Kaitlyn Lawes (Winnipeg) and John Morris (Canmore, Alta.) 9-4 in the Page 1 vs. 2 game at Stride Place on Saturday. “It’s nerve-racking, but it’s certainly fun,” Gushue said of someone else throwing the last rock for him. “She’s made a hell of a lot of good shots this weekend.” But Sweeting needed to overcome some early-end jitters in the game. After missing some key shots in the first half, she was nearly perfect in the second. Her highlight reel included a pinpoint accurate pick in the fifth end to score four and a triple in the sixth end that led to a steal of two. “Brad was setting up really good ends. I just struggled with my last ones a couple times. I just said, ‘Keep setting them up and I’ll make my last one,’ ” Sweeting, who absolutely delivered on her promise as the team is one win away from representing Canada in Pyeongchang, South Korea. The game didn’t start out well for the two. They had an opportunity for multiple points in the first, but were limited to one after a missed slash. They didn’t fare any better in the second. Shooting against two, Sweeting flashed a double and set Lawes/Morris up for a big end. Lawes/Morris made a precise draw to a pocket on the button for a score of three and 3-1 lead. The teams exchanged favours in the third end. Lawes/Morris overcurled a freeze attempt and left Sweeting/Gushue with a hit for two. But their shot also overcurled and rolled too far. Sweeting/Gushue took one and trailed 3-2. Sweeting continued to struggle with her final shot in the fourth end. With Lawes/Morris sitting shot, Sweeting was light on a draw. They had potential to score multiple points in the end, but settled for one and a 4-2 lead at the fourth end break. Sweeting and Gushue regrouped in the fifth end with the hammer in a huge way. They made the best of a miss from the opposition earlier in the end and sat four by Lawes’ final shot. The Lawes draw came up short and Sweeting picked it out to score four and take a 6-4 lead. Incredibly, Sweeting/Gushue expanded the lead in the sixth with a steal of two when Sweeting nailed a triple. Lawes was uncharacteristically light on her draw, which resulted in the steal. In the seventh, Lawes and Morris were faced with a razor thin double to score. They missed, gave up another point and conceded 9-4 after seven ends. 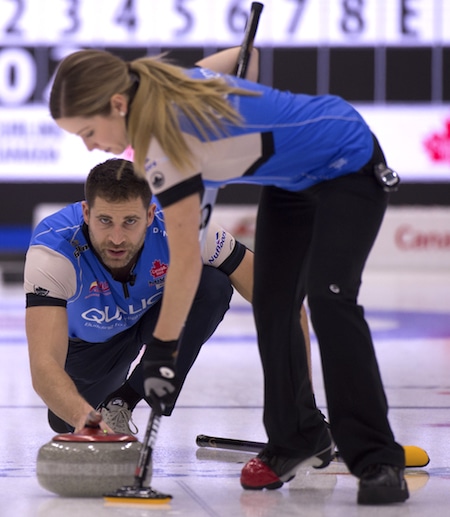 “We’ve got our backs up against the wall now. We had a couple tough ones out there. I felt it was very even. We played a real good game we just made a couple mental blunders,” said Morris. The loss does not end Lawes and Morris’ pursuit for gold. They’ll get one more chance against Jocelyn Peterman (Calgary) and Brett Gallant (St. John’s) in the semifinal at 7 p.m. (all times Central) on Saturday. The winner advances to Sunday’s final against Sweeting/Gushue at 1:30 p.m. “We’ve always said if you have a chance to play in the semifinal you get more time on the ice. It’s not a bad thing – if you know you’re going to win,” said Lawes. “We’re going to go out there and fight hard and see what happens.” Live scoring, standings and statistics for the 2018 Canad Inns Canadian Mixed Doubles Trials are available at www.curling.ca/scoreboard/ CBC Sports is providing streaming coverage of the 2018 Canad Inns Canadian Mixed Doubles Trials. CLICK HERE for the complete schedule. For ticket information for the 2018 Canad Inns Canadian Mixed Doubles Trials, CLICK HERE. This story will be posted in French as soon as possible at https://www.curling.ca/?lang=fr