PENTICTON, B.C. — They took different routes to victory Monday morning but Manitoba skips Jennifer Jones and Keri Einarson kept their teams rolling along at the Scotties Tournament of Hearts. 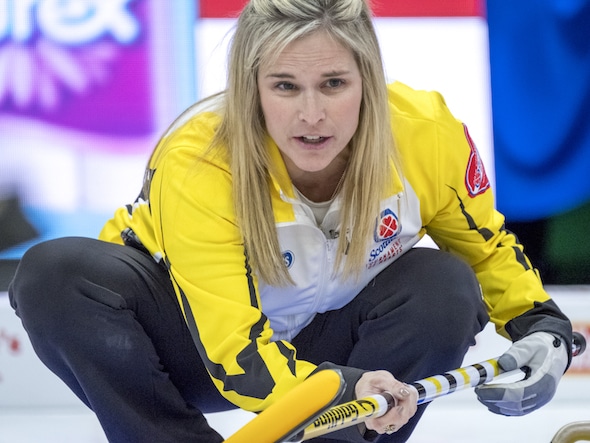 Five-time Hearts champion Jones (Winnipeg), with third Shannon Birchard, second Jill Officer, lead Dawn McEwen and coach Wendy Morgan, jumped all over Mary-Anne Arsenault and her Nova Scotia (1-2; Dartmouth) foursome in the early going and cruised to an 11-5 win to improve to 3-0. Einarson (East St. Paul) and her Wild Card team of third Selena Kaatz, second Liz Fyfe and lead Kristin MacCuish had a struggle with Sherry Anderson of Saskatchewan (1-2; Saskatoon) before stealing three in the ninth end for an 8-4 win that kept her tied with Jones atop the standings in Pool A. Jones, who has scored in double digits in all three of her games, had Nova Scotia in trouble from the opening end. Manitoba had a shot at three in the first, but Jones’s last rock angle tap back jammed and left her with a deuce. Jones and company were sitting three in the second and Arsenault’s last-rock draw to the four foot was off and left Manitoba with a steal of two. After giving up one in the third, Jones took deuces in the fourth and sixth ends to grab a comfortable 8-2 edge. “We played well at the start. Had a couple of sloppy ends in the middle but all in all we were pretty pleased with how we’re playing right now,” said Jones. “We’ve had a really good season, to be honest. Had a couple of bad games at the Trials, which was unfortunate, but pretty consistent season all around. But it’s a long week and you couldn’t ask for a better start than that.” Nova Scotia tried to battle back with two in the seventh and a steal of one in eight to cut the deficit to 8-5 before disaster struck them in nine when they gave up three. “They were on fire and we were very mediocre (in the early ends),” said Arsenault, adding her team’s confidence is a little shaky. “We were lucky to make it to nine and then my last rock in nine picked so that was the end of that.” Team Wild Card and Saskatchewan were neck-and-neck through eight ends, tied at 4-4. In the ninth the veteran Anderson made a perfect draw through a narrow port to sit shot. Einarson followed the same path to take a single. “That was huge, a big point,” said Einarson. “If we had given up a steal it would have been a bit of a momentum changer for sure. My sweepers were great and they got it there. We had some opportunities (earlier) but we missed them, but when we really needed to make the shots we did.”

Anderson was heavy with both her draw shots in the ninth, allowing Einarson to steal three and the teams shook hands. In the other two games, Tracy Fleury of Northern Ontario (1-2; Sudbury)  scored three in the fifth and two in the seventh to get past Chelsea Duncan of Yukon (0-3; Whitehorse) 8-5 and Sylvie Robichaud of New Brunswick (2-1; Moncton) stole one in the 11th to nip Kerry Galusha of the Northwest Territories (1-2; Yellowknife) 8-7. The results left Manitoba and the Wild Card at 3-0 in Pool A followed by New Brunswick at 2-1, Northern Ontario, Northwest Territories, Nova Scotia and Saskatchewan at 1-2 and Yukon winless in three games. The 2018 Scotties Tournament of Hearts continues with draws today at 2 p.m. and 7 p.m. Live scoring, standings and statistics for the 2018 Scotties Tournament of Hearts are available at www.curling.ca/scoreboard/ TSN and RDS2 (streamed on ESPN3 in the United States) will provide complete coverage of the 2018 Scotties Tournament of Hearts. Go to www.tsn.ca/2017-18-curling-broadcast-schedule-1.593081 for the complete schedule. For ticket information for the 2018 Scotties Tournament of Hearts, go to www.curling.ca/2018scotties/tickets/ This story will be available in French as soon as possible at www.curling.ca/2018scotties/category/nouvelles/?lang=fr