Jennifer Jones moved to within one win of a record-tying sixth Scotties Tournament of Hearts championship with a crowd-pleasing, heart-stopping 9-7 win over Kerri Einarson and Team Wild Card in the Page Playoff 1-2 game Saturday evening. 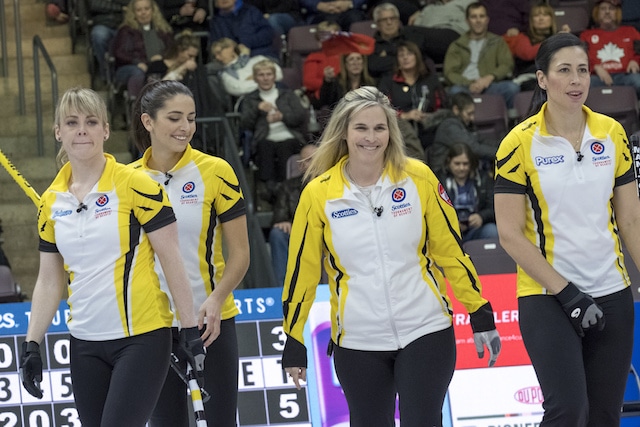 In a game full of momentum swings, great shots, nervous misses and two teams in all-out battle mode, it was a perfect draw by Jones in the 10th that gave her the win. Jones put her rock in the ideal position inside the four-foot where she already had shot rock. That forced Einarson to try a low-percentage, long angle raise double takeout that failed, giving Jones a deuce that sent her, third Shannon Birchard, second Jill Officer, lead Dawn McEwen and coach Wendy Morgan directly into Sunday’s gold-medal game. “It was in a perfect spot,” Jones said of her draw. “I threw that in-turn draw a bunch of times all game, so I felt like I knew it. I just had to be in the four foot to give ourselves a chance to win and I put it the perfect spot.” “She made a shot that was pretty perfect,” agreed Einarson. “If she was anywhere higher I could have just blasted mine, but she made it pretty good.” Team Wild Card had deuces in the second and sixth ends and singles in three other ends. Jones countered with two in the third, three in the fifth and a huge two in the ninth. “I felt we played really well, put some pressure on them,” said Einarson. “Just in the ninth I let things get away. We were trying to blank, and they got two.” Both skips called it a great game for the fans and the players. “A great game, well played, lots of great shots,” said Jones who will be looking on Sunday to tie Colleen Jones for the most Scotties titles. “I think the two shots that stand out were when we saved the end in the second that could have been a five (for Team Wild Card) …. or maybe my first shot in five when we set up the three. That gave us momentum.” Einarson will now play Mary-Anne Arsenault of Nova Scotia (Dartmouth) in Sunday morning’s semifinal with the winner meeting Manitoba in the final. All three teams had finished the round-robin with 9-2 records. In the Page 1-2 game earlier in the day, Arsenault, playing in her 13th Scotties, kept alive her bid for a record-tying sixth championship with a 6-2 win over Tracy Fleury of Northern Ontario. 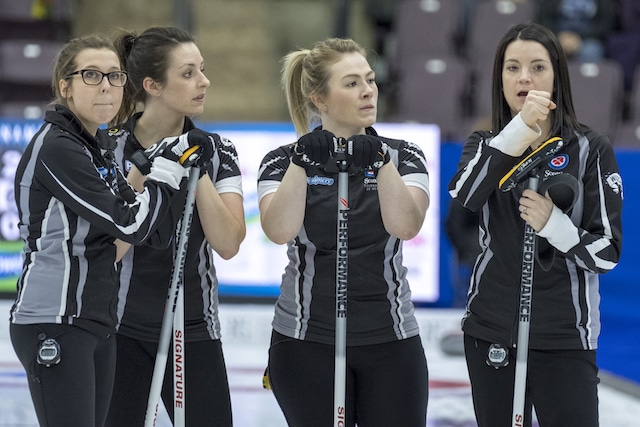 Both Jones and Einarson were aggressive from the start, Einarson trying to get a deuce with the hammer in the first and Jones trying to force her to a single. After an exchange of takeouts by the thirds and skips, Einarson faced an empty house with the final stone. Rather than blank the end, she tried to tap up a guard, along with her shooting stone to get two, but she was wide and slid through the house. Team Wild Card got its two in the second after Einarson’s front end buried three counters, forcing Jones to a come-around draw that slid to the back eight-foot. Rather than draw for two, Einarson tried an angle, double raise takeout in an attempt to get four. The shot got the Jones stone out but, in the end, left Einarson with just two. Jones got that right back in three with a nice double kill and stick. Three half-misses by the Einarson crew opened the door for Jones to draw three in the fifth, giving her a 5-3 margin. An unusual near miss by Jones set the stage for Team Wild Card to score two in the sixth for a 5-5 tie. Einarson got two more in six and a steal of one in seven but Jones made two perfect draws – sandwiched around one by Einarson — through a long, narrow port for a deuce in eight to regain the lead. “That’s okay, what’s another game,” Einarson joked of having to play again Sunday morning. “We never do anything the easy way.” The 2018 Scotties Tournament of Hearts continues Sunday with the semifinal at 9 a.m. and the final at 4 p.m. (all times PST). Live scoring, standings and statistics for the 2018 Scotties Tournament of Hearts are available at www.curling.ca/scoreboard/ TSN and RDS2 (streamed on ESPN3 in the United States) will provide complete coverage of the 2018 Scotties Tournament of Hearts. Go to www.tsn.ca/2017-18-curling-broadcast-schedule-1.593081 for the complete schedule. For ticket information for the 2018 Scotties Tournament of Hearts, go to www.curling.ca/2018scotties/tickets/ This story will be available in French as soon as possible at www.curling.ca/2018scotties/category/nouvelles/?lang=fr