Canada’s Tyler Tardi will play for gold at the 2018 World Junior Curling Championships in Aberdeen, Scotland, after defeating USA’s Andrew Stopera 8-5 in the men’s semifinal on Friday evening. 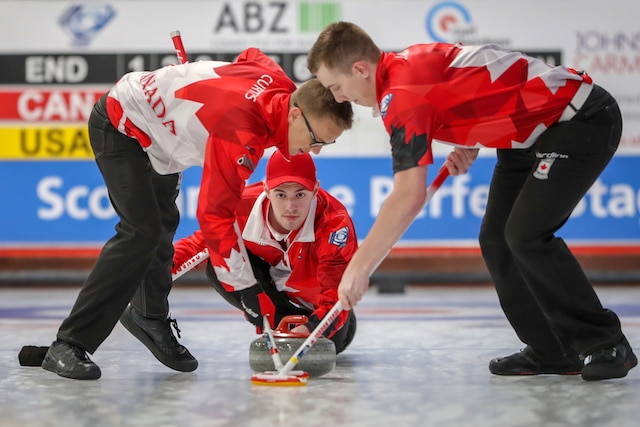 Tardi, third Sterling Middleton, second Jordan Tardi, lead Zachary Curtis, alternate Jacques Gauthier and coach Paul Tardi controlled most of the game and kept the pressure on throughout, including a score of three after blanking the first two ends. Despite giving up a steal of two in eight, Canada made sure of their deuce in nine to go ahead 8-5 and run the USA out of rocks in ten. “Those three points in the third end were a little unexpected actually,” Tardi admitted. “We didn’t really see that coming, but obviously we’re happy with that start to the game against a good team, and how it turned out.” “We’re going to go into the last game and just play how we’ve been playing, and just give it all we’ve got,” he said. In the other semifinal, Scotland’s Ross Whyte needed to make a perfect final draw to defeat Switzerland’s Jan Hess 5-4 and move on to the final. Canada and Scotland face off for the gold medal at 9 a.m. ET on Saturday. The USA and Switzerland will play for bronze medal game at the same time. Team Canada’s Kaitlyn Jones will also be trying to bring home a gold medal on Sunday morning (4 a.m. ET), against Sweden’s Isabella Wranaa, who has gone undefeated through the competition. Jones and her Halifax-based team of Kristin Clarke, Karlee Burgess, Lindsey Burgess, alternate Lauren Lenentine and coach Andrew Atherton defeated China 8-6 in the women’s semifinal on Friday morning at Curl Aberdeen.