“It was a fun game.” That’s how Canadian skip Mark Ideson summed up his team’s 6-5, extra-end victory or the United States on Tuesday night. “They’re great people and there’s a lot of camaraderie out there,” said Ideson of his American opponents. “We have a lot of respect for them. They’re good players, and good people.” Ideson and Team Canada were probably the only ones having fun, as the rest of the Canadian supporters were chewing their fingernails off. Again, Canada got down early, this time falling behind 3-0 after two ends. 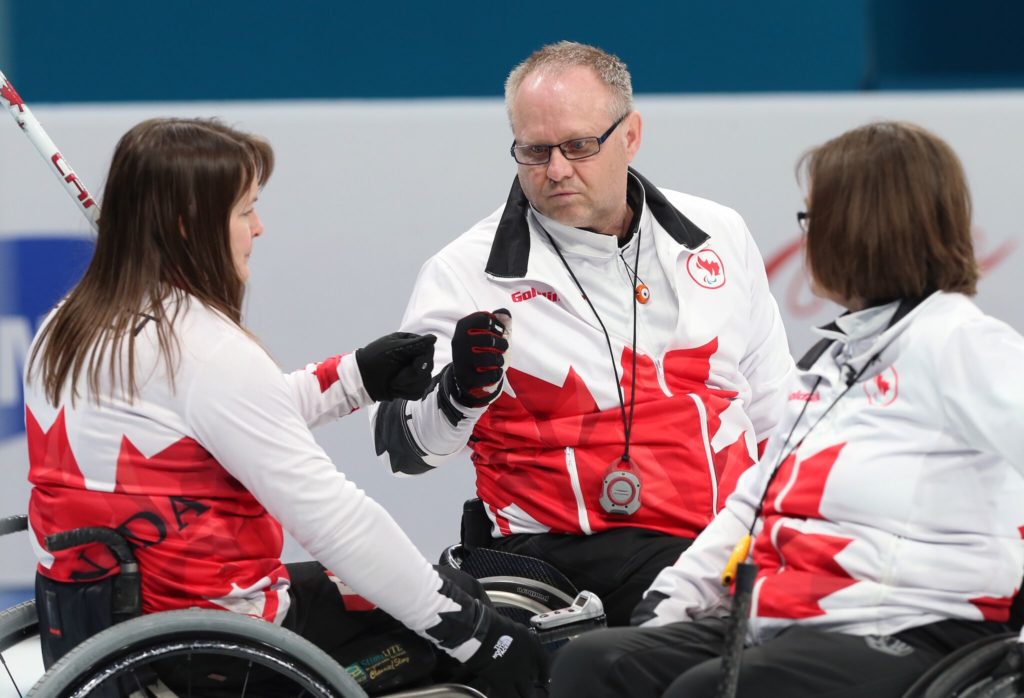 Just as in their morning win over China, they chipped away, and stole several ends in a row, before taking a lead late into the game. Canada has stolen 18 ends (second only to N.P.A.), but that’s not the way Ideson necessarily wants to play. “We’ve got to find a way to start earlier and keep it close, so we don’t have to take so many risks as the game goes on,” he said. “We’re getting away with some now, but when you’re stealing, there’s always a lot of rocks in play, and you can give up a big end.” After they stole one in the 4th, Canada still trailed by one. In the 5th, they were looking at a pretty safe force, but Ideson went through a barely-there port, to take out the American stone and sit on the button. American skip Kirk Black touched the guards on the way by, leading to another Canadian steal.

Is this the shot of the Paralympics?? Watch Canadian skip Mark Ideson thread the needle to steal a single?? https://t.co/1xMPIKd56m pic.twitter.com/WVRlxsKl9I

“I feel like momentum shifted a few times during the game, said the London, Ont. native.  “I got a bit lucky with that shot in 5, but that kind of kickstarted things for us.” The momentum shifted back in the seventh as the Black made a tough nose hit for two. Then again in 8, when Ideson had a draw for two and the win. He came inches short, forcing an extra end. With Canada looking in good shape to steal, Ideson threw his last shot to block the only path the U.S. had to score. It slid about two feet deeper than he wanted, providing some backing for the potential game winner. “When my last rock went deep, I thought it was over. I thought I gave it back to them.” The American skip followed him down, and hit Ideson’s stone, rolling slightly away from the button to seal Canada’s fifth win (5-2), and pushing U.S.A. to the bottom of the table (1-6). “It was a fun game.” said Ideson. “We don’t get down on each other on this team. There may be one player having a bad game, but we know how to pick each other up. It’s a pretty cool thing to be part of.”