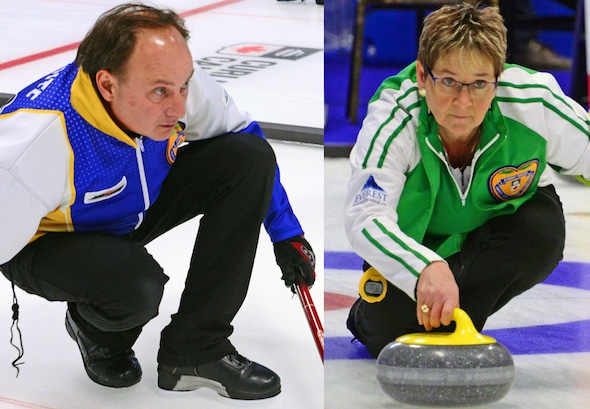 Alberta’s Wade White and Saskatchewan’s Sherry Anderson will be looking to defend their titles at the 2018 Everest Canadian Seniors in Stratford, Ont.

Fourteen men’s and 14 women’s teams (representing the 10 provinces plus Northern Ontario, Northwest Territories, Nunavut and Yukon) will compete in the Stratford Rotary Complex, which houses both the RBC and Molson Arenas.

The teams have been seeded into two pools per gender, based on last year’s results, and will first play a round robin within their pool through Monday.

The top four in each pool then advance to the Championship Pool for games against teams from the other pool, while the remaining teams go to the Seeding Pool. At the conclusion of the Championship Pool on Wednesday, the semifinals will be held Thursday, March 29 at 10 a.m., pairing 1 vs 4 and 2 vs 3. The winners then advance to their respective gold medal finals at 2 p.m. while the losers meet in bronze medal games at the same time. All playoff games will be held in the RBC Arena.

This year’s renewal brings together not only the reigning Canadian senior men’s and women’s champions but also former champions as well. Many of the participants also have Brier or Scotties Tournament of Hearts experience.

On the men’s side, Wade White of Alberta will try to successfully defend the title he won last year in Fredericton. But there will be some serious challengers, including Northern Ontario’s Al Hackner, the 1982 and 1985 Brier and world men’s champion, who is also a former Canadian Seniors winner (in 2006) and a world seniors silver medallist in 2007. In addition, he won last year’s Canadian Masters.

The Canadian Senior Men’s Championship began in 1965 at Port Arthur, Ont. Since then, Manitoba has won a leading 12 titles, Ontario is next with 11 while Alberta has nine.

The Canadian Senior Women’s Championship began in 1973 at Ottawa. Ontario has won a leading 10 crowns, followed by British Columbia with eight and Alberta and Saskatchewan with seven each. However, Ontario’s last victory was back in 2006 by four-time champion Anne Dunn.

The championships were conducted separately until being combined in 1985 at Yorkton, Saskatchewan. Ontario has hosted four Canadian Seniors since then, the latest in 2010 at Ottawa. Prior to amalgamation, the province staged four men’s and two women’s championship events.

This year’s winners will represent Canada in the 2019 World Seniors, at a site and date to be announced by the World Curling Federation.

The World Seniors officially began in 2002. Canada has won a leading nine men’s and 11 women’s titles. Since 2005, the winners of the Canadian Seniors have represented Canada in the following year’s World Seniors. Thus, last year’s winners – Alberta’s Wade White and Saskatchewan’s Sherry Anderson – will wear the maple leaf in the 2018 World Seniors, April 21-28 at Östersund, Sweden.

This is the fourth year of title sponsorship by Everest, the first nationwide funeral planning and concierge service.

For the first time, selected games from the 2018 Everest Canadian Seniors will be streamed live by CBC Sports. You can watch at cbcsports.ca or via the CBC Sports app for iOS and Android.