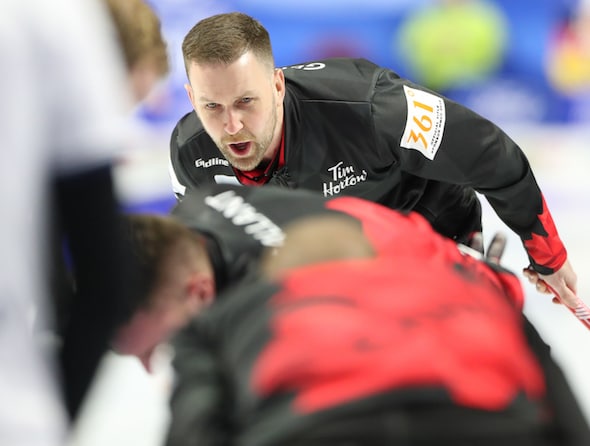 “Terrible. It was a bad day, and not even the record — just the way we played,” said Gushue. “We’re having a hard time with the ice; you hit a new path and it’s 15 to 20 feet slower. When you work in a path, it’s pretty good but when you jump to a new path, maybe only three or four inches different (to the side) and you’re getting a huge, huge difference in the weight.”

Struggles with the ice were compounded by Canada’s time-clock issues in the late stages, in addition to some superb performances from the young Scots, who won the Grand Slam Boost National earlier this season.

“Listen, they played very well, made a lot of runbacks. Our mistakes aside, they played well,” said Gushue. “But we certainly made some errors at the end, based on (lack of) time.”

Canada opened the game with deuces in the first and third ends, sandwiched around a Scottish deuce in the second end. The Scots (1-0) were held to a single in the fourth, giving Canada hammer and a single-point lead going to the fifth.

But much like the win over Russia earlier in the day, the momentum started shifting away from Team Gushue in the middle ends. The teams traded singles the next two ends before Scotland took its first lead of the game, stealing two in the seventh after Gushue’s hit for a single rolled too far.

“That certainly changed the momentum of the game, rolling a little too far there,” said Gushue. “But we certainly weren’t in a good spot for a large portion of the game.”

Canada was again forced to take a single in the eighth, but in the ninth, it was a rare miss from Mouat on a hit — a cross-house double-takeout for a potential pair. Instead, Mouat was wide with his delivery, and it gift-wrapped a stolen single and a 7-6 lead going to the final end. 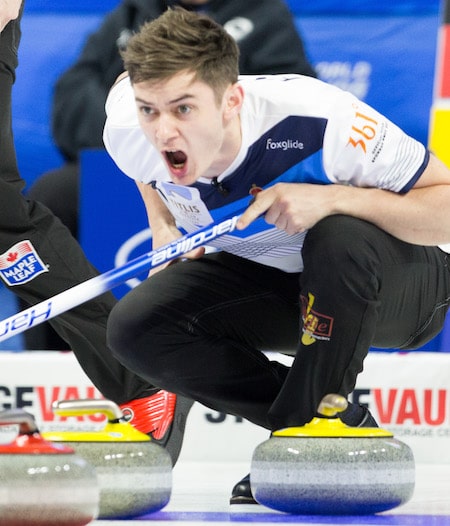 But Canada couldn’t close it out, and when Gushue’s last-rock slash takeout attempt jammed to leave Scotland sitting shot, Mouat was able to make the open draw for the second point and the victory.

“We’re still trying to get a handle on the ice a little bit, and we’re maybe not quite as decisive as we normally are, trying to figure it out a little bit,” said Gallant. “Still a good surface, and once we figure it out, we’ll be fine. Just a few too many misses, that’s all. They played well, and we just missed a few shots.”

“We’ll get some rest for sure,” said Gallant. “Today was a long day; we were at the rink since 10 a.m. (for the opening ceremonies), and just about all of it on our feet. So we’ll relax a bit, and we’ll watch some of the games to see if the ice changes at all.”