Team Canada back in the win column in Las Vegas

LAS VEGAS — Team Gushue got back on track in a big way Sunday night at the 2018 361° World Men’s Curling Championship. 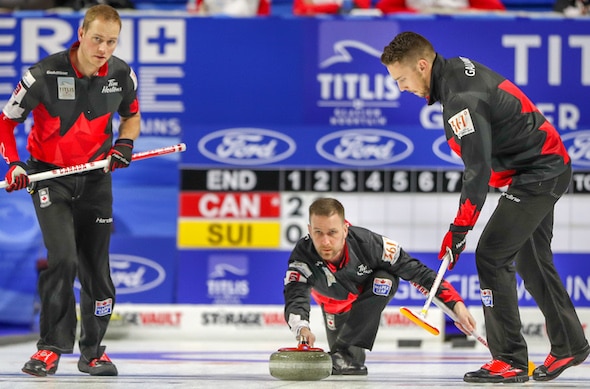 With the win, Team Gushue improves to 2-1 in its bid to defend the world championship gold medal it won for Canada last year in Edmonton.

“I was pretty (ticked) last night; but you know what? I woke up this morning, we went down to the pool with our families and it was forgotten about night,” said Gushue. “Last night I was not a happy camper, but we’re good now. Losses happen. Tonight was a good step forward.”

It was a nice bounceback from Saturday night’s effort that saw the team struggle to get a handle on the opening-day ice conditions.

Gushue’s team was in command from the first end, scoring two to open the game and then getting a stolen deuce in the second after a wonderful hit-and-roll behind a centre guard by Gushue; Pfister was then heavy on his draw to the four-foot.

The Swiss were forced to a single in the third, and Canada padded its lead in the fourth with another count of two — Gushue finished it off with a delicate outturn tap on a partially buried Swiss stone.

Canada added a stolen single in the fifth when Pfister’s angle-raise attempt was light, and when the Swiss finally stopped the bleeding by taking one in the sixth, they elected to cut their losses and concede defeat.

“I think we were trying to catch onto the ice a little more; it took a little adjustment, but I think we got our heads wrapped around what it’s going to be like,” said Nichols. “We came in with a good attitude; we tried to forget about yesterday altogether and just tried to have fun and do what we were doing leading up to the event. Just play the game. We just have to execute, and we didn’t execute as well as we should have, and have been, in both games yesterday. A much better performance tonight.” 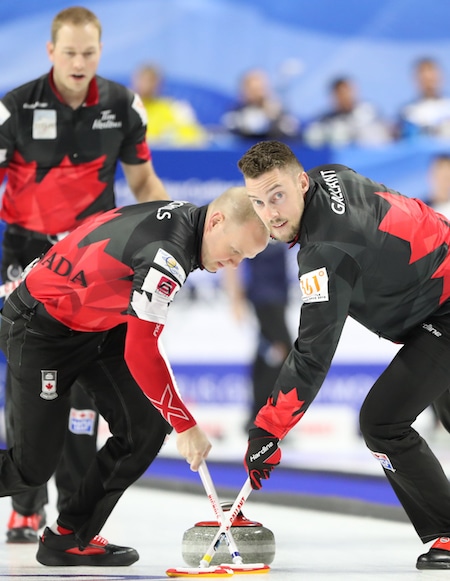 The pool day didn’t hurt the performance on the ice, said Gushue — nor did it hurt his tanning prep for a planned trip to Mexico later this spring.

“I wore a SPF 30 today; I figure I need a nice base burn,” he said with a laugh. “We’re going to Mexico and I’m pretty pasty, so I need a little bit of colour.”