A golden sweep for Canada at World Seniors

Sherry Anderson and Wade White are bringing home gold medals after sweeping the finals of the 2018 World Senior Curling Championships on Saturday in Östersund, Sweden. 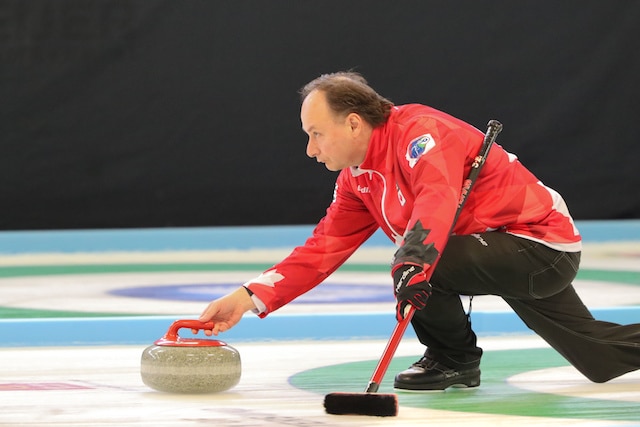 White, with his Edmonton team of vice-skip Barry Chwedoruk, second Dan Holowaychuk, lead George White and coach Bill Tschirhart, dominated the men’s final with an 8-2 win over Sweden’s Mats Wranaa, while Anderson and her Saskatoon team of vice-skip Patty Hersikorn, second Brenda Goertzen, lead Anita Silvernagle and coach Bill Tschirhart defeated USA’s Margie Smith 5-4 on a double golden day for Canada. In the men’s final, Canada applied pressure on the Swedes right from the start, stealing six points in the first two ends to set the tone for the game. “We executed well, and we got a few misses, but we were curling really well,” said White, who defeated Scotland’s Gordon Muirhead in the semifinal earlier in the day. “We had a really good start in both games. I wasn’t expecting the second three. He had a pretty hard shot in the first end, but that was a really good start by us. I think he had a cutter and didn’t pick up on it for a couple of ends.” Trailing 8-1 after six, Wranaa conceded in the seventh, giving Canada its first senior men’s gold medal since 2014, when Wayne Tallon won the title in Dumfries, Scotland. “World champion? It’s taken forty years of curling, it feels good,” said White. “It’s been a battle all my life just to get out of Alberta. I’m going to savour it now.” Canada has won men’s silver at the past World Seniors, with the most recent two championship final losses coming at the hands of Wranaa, who was chasing a three-peat in his home country. “They were too good to give them a start of six,” said the Swedish skip after the game. “They were really good in the first two ends and my stones were curling a lot, so we changed the stones after the first ends and then we got s little better, but it was too late. (The Canadians) are really good, so I have no complaints. They were playing really, really good and they are deserved winners.” The men’s bronze medal was won by USA’s Jeff Wright who defeated Muirhead, 7-2. In the women’s final, Team Canada got off to a fast start against USA Margie Smith, scoring a single in the first end and stealing the next two ends. Leading 5-2 after seven, Anderson had to fend off a late charge, as Smith got close with a steal of two in the final end. But it wasn’t enough, and Anderson held on for the 5-4 win and another gold medal for Canada. 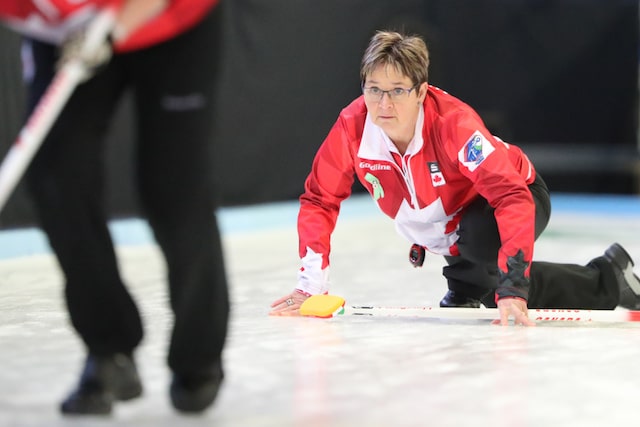 “I thought we played really well this week and other than an end here or there, we were in control of most of our games,” said Anderson. “It feels great, it would have been very disappointing the way we played not to finish it off.” The Canadian women earned their spot in the final with a 7-5 win over Switzerland’s Dagmar Frei in the semifinal earlier in the day. Frei bounced back with a 5-3 win over Sweden’s Anette Norberg to take the bronze medal. Anderson, who represented Saskatchewan at the 2018 Scotties Tournament of Hearts, used her years of experience on the ice to keep cool during the final. “I’ve played in enough finals that I know you just try to keep your emotions in check, and, with practice over the years, that helps,” she said. “Being in big finals helps too. It’s really no different, it’s just another game and you’ve got to make all your shots until the last rock is thrown.” “’World champion’ sounds marvellous, it really does,” she added. “I’ve been playing this sport a long time trying to get this title, so it’s really sweet.” For information on teams, scoring and results, visit the event website at https://www.worldcurling.org/wscc2018