While Canada may lead the way in terms of numbers, it has become more and more obvious that curling is growing on the international stage. One just needs to look at this week’s bonspiel calendar to see that Canadian curlers are competing all over the world, and much of the world teams are competing in Canada. 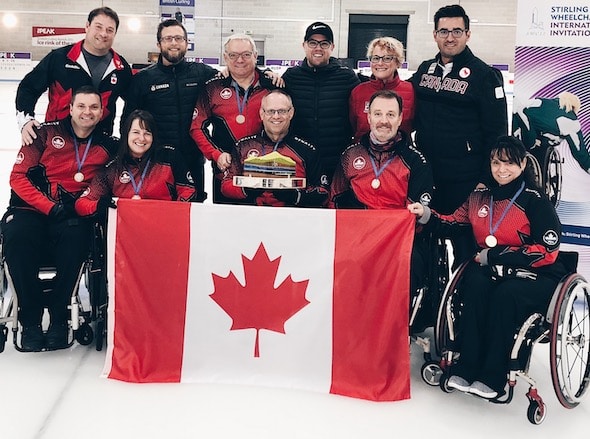 The Canadians beat Sweden’s Viljo Petersson-Dahl in the final by scoring two in the eighth end. They went 4-1 in pool play, losing only to England.

“It was a really great start to the season,” said Ideson. “It’s always nice to get a chance to have an opportunity to see all the teams we’re going to face at worlds.”

Ideson said the team will have a couple weeks off before regrouping in Richmond, B.C., in November as it prepares for the 2019 World Wheelchair Curling Championship, March 3-10 in Stirling.

Meanwhile in Beijing, the $100,000 purse China Open is underway, and almost done the round-robin phase. Winnipeg’s Jennifer Jones sits at 3-2 with two tough opponents left on the schedule in Scotland (Sophie Jackson) and Denmark (Madeleine Dupont). As long as Team Jones finishes in the top four spots, it will qualify for the semifinals.

In the men’s group, Brad Gushue (St. John’s) and team are sitting at the top of the table with a 5-1 record. They’ll try to rebound from a loss to Sweden in their final game against the host Chinese team skipped by Xiu Yue Ma. Win or lose, they’ll move on to the playoff round.

Back in Canada, the top women’s teams are in action in Portage la Prairie, Man., at the Canad Inns Women’s Classic. Thirty-two teams are playing a triple knockout bracket, vying for a share of the $60,000 purse. Kerri Einarson (Gimli, Man.) looks to continue her team’s hot streak after winning four consecutive events, and has opened the event with two wins. Edmonton’s Chelsea Carey and Scotland’s Eve Muirhead have also started the competition with two wins.

Finally, in Quebec, the Challenge de Curling Gatineau features 24 men’s teams battling over $37,000. Martin Crête (St. Romauld, Que.) and Michael Fournier (Montreal), both recent Quebec reps at the Tim Hortons Brier, both opened with two wins and will try to qualify through the A-side of the triple knockout. Toronto’s John Epping won his first, but lost to Stuart Thompson (Dartmouth, N.S.) in his second. He’ll try to qualify through the B-road.

For all scores and updates, visit www.curlingzone.com.