A loss is never a welcome sight for any team’s record. But just like a magician, Winnipeg’s Jason Gunnlaugson essentially made his first loss disappear with a victory against China during Thursday’s Curling World Cup action at Ralston Arena in Omaha, Neb. 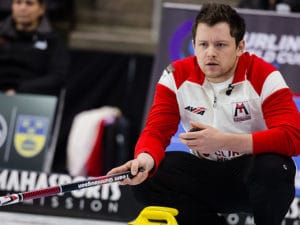 Jason Gunnlaugson of Winnipeg and his men’s team picked up their first win at the Curling World Cup in Omaha, Neb. (Photo, World Curling Federation/Céline Stucki)

“In our pool now everyone is one and one so basically the first two draws never happened and it’s going to be the first team to three or maybe four wins – so it’s a lot of fun,” he said following the win.

Gunnlaugson, vice-skip Alex Forrest, second Denni Neufeld, lead Connor Njegovan and coach Chris Neufeld maintained total control against Zou Qiang of China (1-1) in the 6-3 win. Canada opened with a raise for two in the first end and secured a steal of two in the second for an early 4-0 lead, allowing for a more defensive-minded game the rest of the way.

It is a welcomed result after opening with an 8-6 loss to Bruce Mouat of Scotland (1-1) during the late Wednesday night draw.

The Canadian men are scheduled to play on Thursday night against 2018 Olympic gold-medallist John Shuster of the United States (1-1) and will begin the second half of the double round-robin on Friday with a rematch against Scotland. 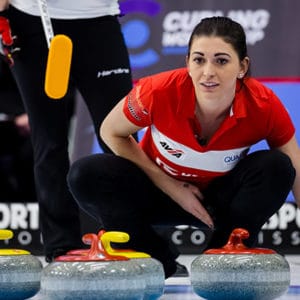 Meanwhile, Canada’s Kalynn Park (Calgary) and John Morris (Canmore, Alta.) split their two games in the mixed doubles competition on Thursday. With no mixed doubles experience together, Park and Morris knew there’d be a learning curve during this week’s action in Omaha.

In early action on Thursday, there was a 9-6 victory against Sweden’s Malin Wendel/Fabian Wingfors (0-3). A four-ender in the second followed by a steal of one in the third gave Canada a 5-1 lead early in the game, but Swedish scores of two in the fourth and sixth ends put the Nordic nation back in the mix, trailing 6-5. Park and Morris put the game out of reach with a three-ender in the seventh en route to the victory.

Park, the 2015 Canadian mixed doubles champion with former partner Charley Thomas, is no stranger to the discipline but is learning a lot from the one-time World men’s (2008) and two-time Olympic gold-medallist (men’s in 2010 and mixed doubles in 2018).

“John’s experience will be huge, with both of us having played in a worlds before and him with the Olympics. At that point in the event you manufacture wins, you don’t always win them outright so his experience with that will really come into play,” Park said.

However later in the day, the pairing’s momentum was halted in the afternoon by a 9-7 loss against South Korea’s Hyeri Jang and Chiwon Choi.

Canada sits third in the standings with a 1-2 record. Park/Morris are ahead of Sweden, but sit behind South Korea (2-1) and Switzerland (3-0). Canada commences the second half of the double round-robin on Friday against Switzerland’s Jenny Perret/Martin Rios, and Sweden.

Also on the ice was Canada’s women’s team, led by Tracy Fleury (Winnipeg), fell short in its only game of the day.

Fleury, vice-skip Selena Njegovan, second Liz Fyfe, lead Kristin MacCuish and coach Andrea Ronnebeck battled from behind right from the beginning against 2018 Pacific-Asia champion Minji Kim of South Korea (1-1). Canada provided South Korea with a four-point cushion in the first end after failing to score on a hit-and-roll attempt. From that point on the Canadian women were playing catch-up and, while they were within one point at the fourth-end break, they lost 6-4.

Canada gets its chance to rebound from the loss on Friday morning, but it will be no easy task. The women’s team takes on defending United States champion Jamie Sinclair, who remains undefeated at the event with a 2-0 record. Also on Friday, Canada will commence the second half of the double round-robin during the afternoon against Russia’s Alina Kovaleva (0-2).

The loss gave the Canadian women’s team a 1-1 record after two days of action. Canada is tied with South Korea for second in the group.

There are eight teams competing in each of the men’s, women’s and mixed doubles competitions. All teams play a double round-robin until Saturday. The top teams in each group move into the finals on Sunday. In addition to prize money, the winning teams will earn a berth to the Curling World Cup Grand Final, occurring in Beijing from May 8-12, 2019.