SYDNEY, N.S. — It was a snowy Monday night in Charlottetown, almost exactly eight years to the date, the last time Suzanne Birt beat Jennifer Jones in a curling game. 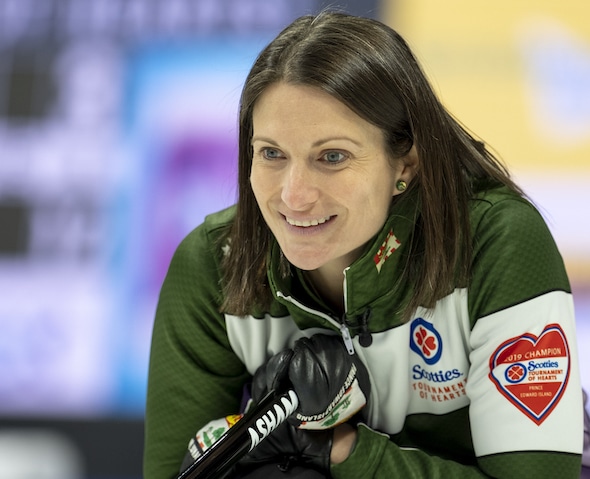 In fact, until Monday morning, it had been the ONLY time Birt had beaten Jones in 10 attempts — an 8-6 victory in Draw 8 on Feb. 21 of the 2011 Scotties Tournament of Hearts.

But eight years later, that long-awaited second victory is in the books, and by that same 8-6 margin as Birt’s Prince Edward Island team downed Jones and Team Canada at Centre 200.

The victory created a five-way tie for top spot in Pool B at the 2019 Scotties, with P.E.I., Team Canada, Team Wild Card, Saskatchewan and the Northwest Territories setting the pace with 2-1 records.

Suffice it to say, it was a delightful way to spend a holiday Monday morning for Birt, vice-skip Marie Christianson, second Meaghan Hughes, lead Michelle McQuad and coach Mitch O’Shea.

“Absolutely,” said a smiling Birt, the former world junior champ who’s in her 10th edition of the Scotties. “We always like to get a win at any time in the tournament, and it’s good to get that win against Team Canada; they’re a great team. So hopefully we get on a roll now going forward.”

It was a slow start for the Charlottetown-based Islanders, who gave up a steal of two in the first end, but bounced back to tie it with two in the second, and then back-to-back stolen deuces in the third and fourth ends.

Team Canada would rally and pull to within one with a stolen two in the eighth end, but Jones missed her final stone of the 10th and Birt didn’t need to throw her last to score an insurance point and nail down the victory.

“We put a little pressure on them,” said Birt. “We were getting our rocks in good spots, and making them try to make good shots. They struggled with a few shots early on, and we kept the pressure on and tried to capitalize.”

Seven Scotties have passed since Birt last defeated Jones, but she definitely has fond memories of that victory on home ice.

“I remember I made a double takeout and scored a four-ender, and we had the hometown crowd with us,” she said. “It was a good feeling.”

As for Team Canada, veteran observers of this team will tell you that slow starts, with the occasional upset loss thrown in for good measure, is fairly routine for Jones-skipped teams, so the panic button is hardly being pushed.

“We’re not as sharp as we’d like to be,” conceded Jones. “But all in all, we’re pretty happy — 2-and-1 after three games, we’re OK. It’s a long week. I just don’t like giving up steals. It’s not my favourite way to lose a game.”