Cameron Goodkey: A quick trip from Learn To Curl to national champion

When Ottawa’s Cameron Goodkey signed up for a Learn to Curl progam at the local Sportsplex five years ago, he had no idea that the skills he absorbed through that introduction to the sport would lead surprisingly quickly to a special moment: hoisting the trophy at the 2019 U SPORTS/Curling Canada University Championship this past March in Fredericton, N.B. 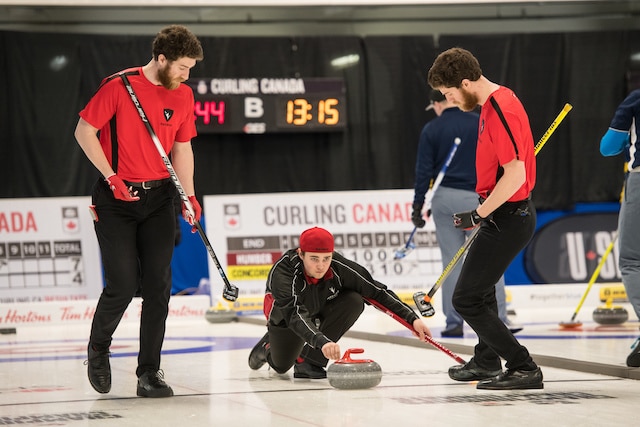 It all started when Goodkey and three high school buddies came to the Ottawa Sportsplex for a beginners program that Robyn Mattie was running on behalf of the Ottawa Curling Club. The goal? They wanted to get started in the sport so they could start a school team. But very quickly, Goodkey was hooked by the introductory program and started looking for more opportunities to hit the ice. “Right from the get-go, he was a natural,” says Mattie, a seasoned instructor in the Getting Started in Curling program designed by Ottawa’s curling guru, Earle Morris. Mattie was involved in the development of this program from its beginning in 2006, and she immediately spotted Goodkey’s potential. “I give lots of props to Robyn for getting me into the game and doing way more than she needed to to help me develop into the curler I am today,” says Goodkey, who grew up playing hockey, soccer and one year of football. “I joined her a few times sparing in the cash league at the Ottawa Curling Club. The next year I spared a ton in the cash league, then the year following I joined the cash league and really started to develop my skills.” The confidence from putting his newfound skills to work in league play led to Goodkey quickly stepping into an instructor role, guiding new curlers through the skills phase of the program and into Getting Started In Curling league play. “Cam showed up every week to work with curlers who started only a few years after him,” says Darren McEwen, another Ottawa Curling Club Getting Started In Curling instructor. “He quietly and confidently would share this knowledge he’d only learned a couple of years earlier.” “The coaching aspect of the Getting Started league actually helped me develop skills and techniques for my own game,” Goodkey says. “I was able to better understand how different techniques and mechanisms work. Learning how to teach other people, helped me learn a ton about the game myself.” By the time Goodkey got to Carleton University a few years later, his skills were solid enough that he was ready to make the leap to inter-university competition. But unlike other junior curlers, who come up through the ranks of club and possibly provincial competition, he was lacking those years of connecting with other youth curlers. “The Carleton curling program has been a huge part of my development,” he says. “Starting curling at a later age has been a slight disadvantage because I didn’t know many other curlers, so it was hard to try and find a team at that point. The program at Carleton has really helped me build connections as the years have gone on.” Goodkey and his Carleton Ravens team of third Mackenzie Calwell, second Morgan Calwell, lead Brendan Acorn (who holds the broom as vice-skip), alternate Wesley Stakes and coach Tom Sinclair, finished the championship round robin of the national championship with a 5-2 record, in second place. They defeated 2018 champions, University of Alberta, skipped by Karsten Sturmay, in the semifinal, then went on to a 10-4 win over Memorial University’s Greg Blyde in the final. “It obviously feels amazing, just to pick up the game so quick and be a national champion, but I couldn’t have done it without the help of everyone around me,” says the 2019 U SPORTS men’s curling champion. “It’s amazing how nice people in the curling community are. I’ve had the opportunity to play and practice with Scotties champions, women’s world champions, senior world champions and many other great curlers who have really gone the extra mile to help me improve my game. I still have lots of work to do, but it’s nice to be able to achieve such a great accomplishment so early in my curling career.” Mattie, who was there at the start of Goodkey’s curling journey, couldn’t agree more. “Cameron is a perfect example of what every curler should be. Smart, polite, classy,” she says. “If someone asks him to spare, this kid will play three draws a night. He just loves the game.” And Goodkey knows that includes giving back to the sport. “After taking six lessons from Robyn, and really getting into the game by playing a lot, I found a lot of my love for the game coming to me (through) coaching and giving back to people trying to learn the game – as I did a few short years ago.” 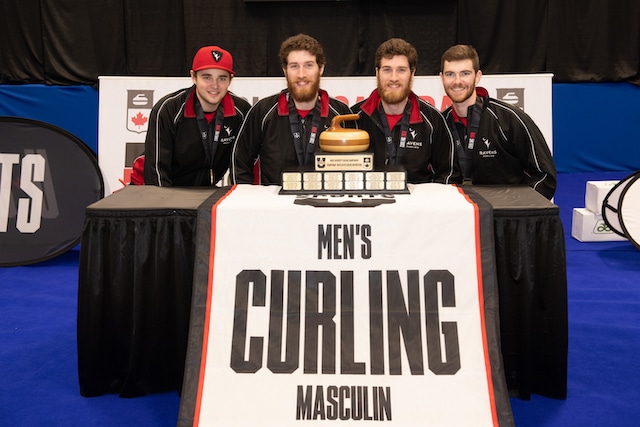 Cameron Goodkey: “I still have lots of work to do, but it’s nice to be able to achieve such a great accomplishment so early in my curling career.” (Skip Goodkey, third Mackenzie Calwell, second Morgan Calwell, lead Brendan Acorn) (Curling Canada/Rob Blanchard photo)