LAS VEGAS — Team North America has added another point to its lead in the overall points race at the 2014 World Financial Group Continental Cup at the Orleans Arena. 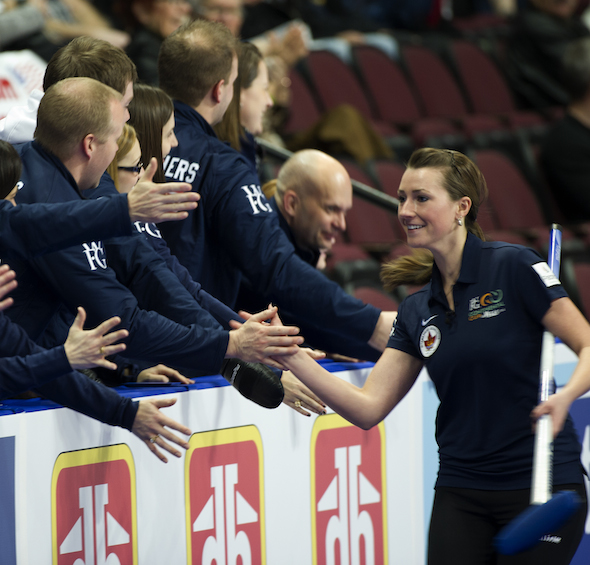 The defending champions picked up two victories out of the three games in the concluding round in mixed doubles action on Saturday morning to take a 13-11 lead on Team World in curling’s version of the Ryder Cup. A total of 60 points are available, meaning the first team to 30.5 points will win the WFG Continental Cup, although as the Cup holders, Team North America would need only 30 points to maintain possession. Team North America got victories from the tandems of Ryan Fry and Emma Miskew (10-4 over Team World’s Greg Drummond and Anna Sloan), as well as John Shuster and Jessica Schultz (10-2 over Team World’s Thomas Ulsrud and Miyo Ichikawa). Team World’s David Murdoch and Eve Muirhead prevented the clean sweep with a 7-2 win over Team North America’s E.J. Harnden and Rachel Homan. Fry and Miskew took control of the game by scoring threes in the first and third ends — the latter on a precision pick from Miskew to remove a Team World rock that she could only see a sliver of from the hack. “I couldn’t see a lot (of it),” said Miskew. “I threw it with normal weight, but knew it would come up a little bit, and hoped for the best. With no sweeping it’s pretty much a guess so you just throw it and hope for the best.” Shuster and Schultz, meanwhile, stole deuces in the first, second, sixth and seventh ends against the struggling Team World pairing. 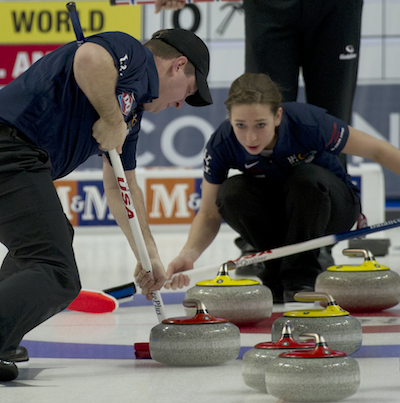 “Luckily John and I both got our draw weight pretty quickly and we were able to come around and make the freezes that we needed to … and that’s big,” said Schultz. “You get a good shot there to start and you get the momentum,” added Shuster. “Every shot during the end you just have to make sure you maintain that good position. We did a pretty good job with that. She got us great starts and I tried not to screw it up.” The Scottish duo of Muirhead and Murdoch also was in a thieving mood, stealing singles in the first three ends, then putting the win away with a stolen deuce in the seventh. “It’s a lot of fun out there,” said Muirhead. “It’s a lot different to traditional curling — you can give up threes, you can be up and give it away really easily. I got to play with Dave, which was extra special and getting to mix with the other genders is also good.” “Each draw is a little seesaw just now, one way or another, and you just have to hang in there up to the skins,” added Murdoch. “The skins will obviously decide it, so if we’re tight going into that we like our chances.” Play on Saturday continues with the final two traditional team games, at 1:30 p.m. and 6:30 p.m. (all times Pacific). For the six mixed doubles and six singles matches, one point was awarded for each victory, one-half point if tied. There will be 18 team games (nine men’s and nine women’s) played, each worth one point for a win and a half-point for a tie. All games are eight ends and there are no extra ends.  There will also be six skins games (those matchups will be decided on Saturday), with each game worth a total of five points to the winner. For ticket and other event information, visit www.curling.ca/2014continentalcup-en/ For the complete schedule, go to: www.curling.ca/2014continentalcup-en/draw-schedule/ For live scoring and up-to-date standings, go to: www.curling.ca/2014continentalcup-en/results/ TSN (RDS2 in French), the exclusive television network for the CCA’s Season of Champions, will provide complete coverage of the WFG Continental Cup.