Val Sweeting made a last-rock draw to the edge of the button to tie Eve Muirhead 4-4 and give Team Canada a split of the morning team matches Friday at the 2015 World Financial Group Continental Cup of Curling presented by SecurTek Monitoring Solutions.

Mike McEwen of Winnipeg beat Thomas Ulsrud of Norway 7-2 while Margaretha Sigfridsson of Sweden defeated Jennifer Jones of Winniipeg 9-4. The results gave Team Canada and Team Europe a split of the three available points. Canada now leads 8.5 to 3.5 with 30.5 needed to win the event. The biggest surprise of the morning came early – Sigfridsson scoring five on Jones in the first end.

“The stones lined up well for us,” Sigfridsson said of the first end. “I don’t think Jennifer saw it on her last one. She was trying for us not to get two.” The Jones foursome tried to rally, scoring a deuce in the second but Sigfridsson, third Maria Prytz, second Christina Bertrup and lead Maria Wennerström came right back with two of their own in the third. It was an uphill battle from there and the reigning women’s Olympic champions from Winnipeg couldn’t come up enough consistent shots to threaten Sigfridsson’s cosy lead. “It’s comfortable to play the rest of the game but you never know with Jennifer, she can do really great so we needed to keep our focus.” Said Sigfridsson. McEwen scored deuces in the second and fourth end and three in the seventh to cruise to the win. 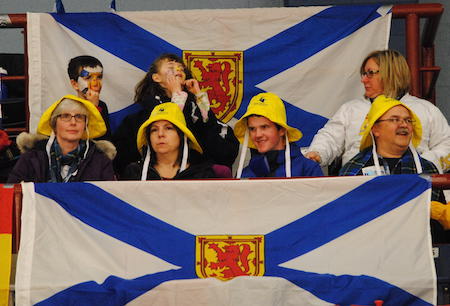 “It was like a workman-style game,” said McEwen. “Blank the first end, force (them to a single) two in the third, a real nice start. We weren’t massively in the lead but they didn’t really have any opportunities either to tighten it up.” The singles, or skills, competition goes this afternoon beginning at 1:30 p.m. MT, with Sigfridsson against Sweeting, Anna Sidorova of Russia versus Rachel Homan of Ottawa, Muirhead taking on Jones on the women’s side. On the men’s side it will be David Murdoch of Scotland against Morris, Ulsrud versus McEwen and Niklas Edin of Sweden playing Olympic champion Brad Jacobs of Sault Ste. Marie. The next round of team matches goes this evening at 6:30 p.m. For ticket and other event information, visit www.curling.ca/2015continentalcup-en/ For the complete schedule, go to www.curling.ca/2015continentalcup-en/draw-schedule/ TSN (RDS2 in French), the exclusive television network for the CCA’s Season of Champions, will provide complete coverage of the WFG Continental Cup.