The highly anticipated historical Battle of Alberta between Team Canada and Alberta turned out to be an intense game of cat and mouse between two rival teams that refused to give an inch Tuesday at the Tim Hortons Brier, presented by SecurTek Monitoring Solutions.

In the end the first meeting of two Alberta teams in the Tim Hortons Brier turned in favour of Team Canada in the ninth end when the Pat Simmons skipped foursome scored a pivotal two and then hung on for a 6-3 win over Kevin Koe. It was the first time two Alberta teams had met in the Tim Hortons Brier and adding to the intrigue both teams also play out of the same Glencoe Club in Calgary. “We’ve had a couple of barnburners against them this year,” said former skip John Morris, who swapped places with Simmons to try to get Team Canada on track. “If you can’t get up for a game like tonight you don’t have a pulse. Now we’re back in the hunt, 4-3, and we have our destiny in our hands.” While the main focus of the Scotiabank Saddledome crowd was on the all-Alberta match, there were three other key games that had impact on the standings. Brad Jacobs of Northern Ontario (Sault Ste. Marie) put a serious dent in the playoffs hopes of Reid Carruthers of Manitoba (Winnipeg) with a dominating 6-1 win. That dropped Manitoba to 3-3 while keeping the Olympic gold-medallists unbeaten through seven games. The Jacobs team continued to rack up multi-point ends, scoring three deuces while holding Manitoba to just two singles. Brad Gushue of Newfoundland-Labrador (St. John’s) battled every end and every rock before finally subduing a stubborn Mark Kean of Ontario (Fenelon Falls) 8-6 and Jean-Michel Ménard of Quebec (St-Romuald) scored two in the 10th to beat Steve Laycock of Saskatchewan (Saskatoon) 7-5. 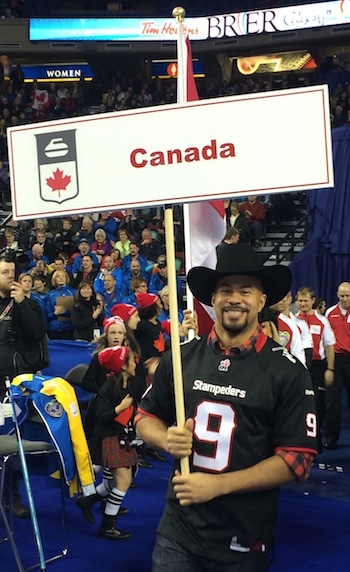 The results left Northern Ontario atop the standings at 7-0 and Newfoundland-Labrador second at 5-2. Saskatchewan sits at 4-2 followed by Quebec and Canada at 4-3, B.C., Manitoba and Alberta at 3-3, Ontario and Prince Edward Island at 2-4, New Brunswick at 1-5 and Northwest Territories winless in six games. Koe drew the four-foot for a single in the first end and Simmons, not to be outdone, drew the button for two in the second. The teams traded singles in the third and fourth but neither team could find a way to steal or build a big end because no one was making any major misses or mistakes. Alberta tied the game 3-3 with a single in sixth but the break came for Canada in the ninth. After Simmons was narrow on an attempted double, Koe was also off on his double try, leaving Simmons a straight hit-and-stick for two. Koe had a chance for two with last rock in the 10th but his long in-and-out try failed. “We didn’t play well,” said Koe, who took blame for the ninth end. “We didn’t put much pressure on them.” 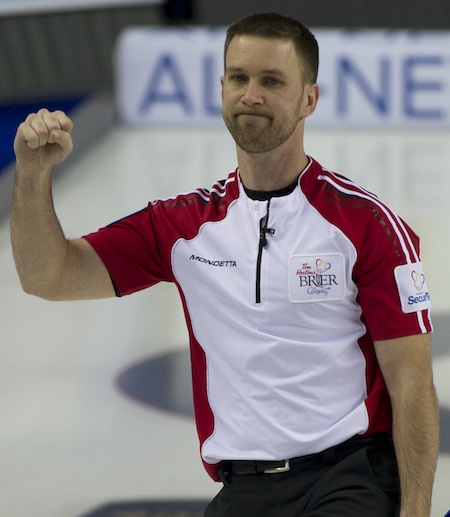 But Koe, who won last year’s Tim Hortons Brier and then left Simmons, Carter Rycroft and Nolan Thiessen to form a new team with Marc Kennedy, Brent Laing and Ben Hebert, was upset with an incident in the eighth end. Rycroft was called for a hog-line violation but when replays clearly showed he wasn’t over the line, and Alberta let him re-throw the rock. “That’s a total joke,” Koe said of the situation. “It’s clear he wasn’t over but the problem I have with it is he wasn’t going to make the shot. We did the right thing, let him have the redo and of course he makes it.” TSN/RDS2, the official broadcast partner of Curling Canada’s Season of Champions, will provide complete coverage of the Tim Hortons Brier, leading to the gold-medal game on March 8 at 5 p.m. The winner of the 2015 Tim Hortons Brier will represent Canada at the Ford World Men’s Championship, March 28-April 5 in Halifax, in addition to qualifying for the 2015 Home Hardware Canada Cup in Grande Prairie, Alta., the 2016 World Financial Group Continental Cup in Las Vegas and the 2016 Tim Hortons Brier in Ottawa For ticket information, go to www.curling.ca/2015brier-en/tickets/