TALLINN, ESTONIA –The Canadian men and women are bringing the 2015 World Junior Curling Championships gold medals back to Canada. 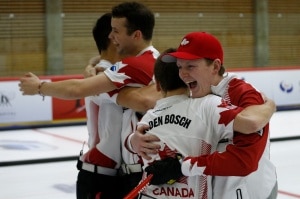 Hugs all around for the Canadian men after winning the gold medal at the World Juniors (Photo: WCF/Richard Gray)

The Canadian teams have been the class of the field all week at the Tondiraba Ice Hall. The Winnipeg-based men’s team, Braden Calvert, Kyle Kurz, Lucas Van Den Bosch, Brendan Wilson, alternate Colton Lott and coach Tom Clasper, finished the round robin with only one loss (to Russia) while the women breezed through the round robin with a perfect 9-0 record. In the men’s final, Calvert, Kurz, Van Den Bosch and Wilson shot an incredible 91.5 per cent as a team en route to a 6-3 win over Switzerland. Canada started off the game strong with a deuce in the second end and never looked back. Switzerland blanked the third end before giving up a steal of one in the fourth after rubbing off a rock in the top 12-foot on a tap attempt. After another blank by Switzerland in the fifth end, Canada again picked up a steal of one in the sixth end to extend its lead to 4-0. Switzerland attempted to generate a deuce in the seventh, but was thwarted by solid hits by the Canadian team and had to settle for a draw to the eight-foot for a single point. The Canadians piled the rocks into the house in the eighth end and drew into the house on Calvert’s last rock for two points to bring the score to 6-1. The Swiss men answered back with a deuce in the ninth end, but it was too little, too late, as the Canadians ran them out of rocks in the 10th to win the world title. “It’s just unbelievable. When you start the season, you never quite picture that it’s going to end up like this,” said Calvert. “It’s pretty special to not only bring home a medal, but a gold medal. It’s just icing on the cake.” Calvert attributed an increased work ethic to his team’s success this year. “We just beared down and worked a little bit harder going into this season,” said Calvert. “We threw a ton of rocks in Winnipeg and it really shows when you get out here.” 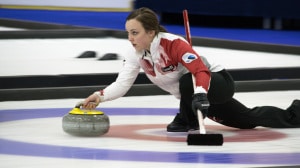 Edmonton’s Kelsey Rocque successfully defended her World Juniors title and joins Scotland’s Eve Muirhead as the only other female skip to win back-to-back world championships. Rocque along with teammates Danielle Schmiemann, Holly Jamieson, Jessica Iles, alternate Kristen Streifel and coach Amanda-Dawn Coderre won the gold with an 8-2 victory over Scotland in the World Juniors final. It was a dominant performance right from the game’s start. After a blank in the first end, Canada picked up a single in the second end. Scotland tied it up with one point in the third end. Canada set the tone of the game in the fourth end with a hit to score a three-ender. Scotland blanked the fifth end before picking up their last point of the game in the sixth end. The seventh end wasn’t shaping up well for Canada until third Schmiemann started a string of three freezes by Canada. The Scottish team attempted to freeze to the Canadian shot stone on their last, but rubbed off by a couple inches and gave Canada a hit for another big three points and a 7-2 lead. With the world championship title imminent, the Canadian took a moment to refocus. “In our scrum, we really talked about keeping our emotions in check and going through our normal routines,” said Rocque. 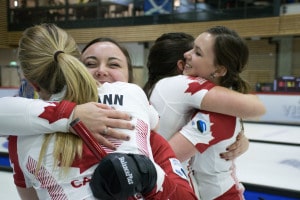 The Scottish women elected to play a draw on their last rock in the eighth end, but came up light and gave Canada a one-point steal and the 8-2 win. “It’s really exciting [to win the gold medal] and bring it home to Canada,” said Rocque. “There’s honestly no words.” The key to the Canadian women’s team’s success? “We’re best friends on and off the ice,” said Rocque. “What we really do is we handle our emotions well on the ice and we don’t get too worked up over things.” The only other women’s team to go through undefeated through the round robin and win the World Juniors was Canada’s Marliese Kasner (Miller) back in 2003. It is the sixth time in World Juniors history that Canada has won the world titles on both the men’s and the women’s side; the only other nation to have captured double gold is Scotland in 1993. Previous Canadian tandem champs were in 2003 (Marliese Kasner [Miller], Steve Laycock), 2001 (Suzanne Gaudet, Brad Gushue), 1998 (Melissa Adams [McClure], John Morris), 1994 (Kim Gellard, Colin Davison) and 1988 (Julie Skinner [Sutton], Jim Sullivan). To watch previously broadcast World Juniors games, please visit the World Curling Federation’s YouTube channel at www.youtube.com/WorldCurlingTV For more information on the World Juniors, please visit: https://wjcc2015.curlingevents.com/ This story will be posted as soon as possible at https://www.curling.ca/?lang=fr