Niklas Edin and his Sweden teammates bounced back from a devastating Monday night loss with an impressive 7-3 victory over Jiří Snítil of the Czech Republic Tuesday morning in the ninth draw at the Ford World Men’s Curling Championship in the Scotiabank Centre in Halifax.

Sweden’s Niklas Edin got back on track with a win on Tuesday morning. (Photo, Curling Canada/Michael Burns)

Edin, third Oskar Eriksson, second Kristian Lindström, lead Christoffer Sundgren, alternate Henrik Leek and coach Fredrik Lindberg came out determined to put behind them last night’s last-rock loss to Norway. They scored two in the second end, stole one in three, added a deuce in six and another single steal in seven. “If we didn’t win this one we knew we were going to be almost out of it already,” Edin said of the importance of the victory. “And we needed to play good as well. Not just win the game, we needed to feel good, get the confidence back and feel we can win the rest of the games here.” After a good night’s sleep he was the first up Tuesday morning and rallied the team to get them prepared to bounce back. “We haven’t really been on track so far … I know we can pick it up but it’s about time to do it now,” he said. “We can’t afford to lose any more games so we needed to get into this one right and get our attitude back on track.” In the other morning games, Yusuke Morozumi of Japan stole eight points in the first five ends, including three in the third, to beat Joel Retornaz of Italy 8-1 in six ends, Ewan MacDonald of Scotland overcame a 3-0 first-end deficit to pick up his first win, 8-6 over Evgeny Arkhipov of Russia and Marc Pfister of Switzerland nipped Aku Kauste of Finland 8-7. Pfister needed a last-rock draw to bite the pin to get the win and had to watch nervously as his stone rubbed a guard at the top of the 12 foot before just making it into shot position. “It’s unbelievable, it was so close, so close,” an excited Pfister said after the win that moved him to 5-1, tied with Canada for most wins. “First I thought, oh it’s wide, it’s long. But the ice is a little bit flat now. At the end it curls so much. “Of course, 5-1 is amazing for such a young team and first time at the worlds. I think it’s a great performance from the whole Swiss team. 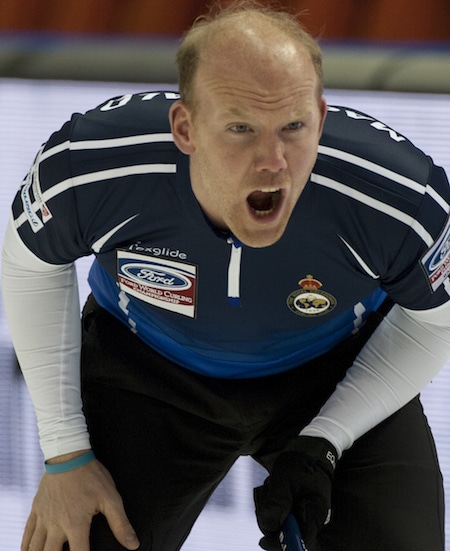 Pat Simmons of Canada (5-0), Jialiang Zang of China (1-4), Thomas Ulsrud of Norway (4-1) and John Shuster of the U.S. (2-3) had the morning byes. The 2015 Ford Worlds continue on Tuesday with draws at 2:30 p.m., and 7:30 p.m. (all times Atlantic). All Canadian games and the playoff rounds for the 2015 Ford World Men’s Curling Championship will be televised on TSN/RDS2, the official broadcasting partner of the Season of Champions. The full broadcast schedule is available at https://www.tsn.ca/2014-15-tsn-curling-broadcast-schedule-1.95515. Live scoring is available at: https://www.curling.ca/scoreboard/#/competitions/1670-2015-ford-world-men-s-curling-championship/scoreboard To purchase tickets to the 2015 Ford World Men’s Curling Championship, go to: https://www.curling.ca/2015worldmen-en/tickets/