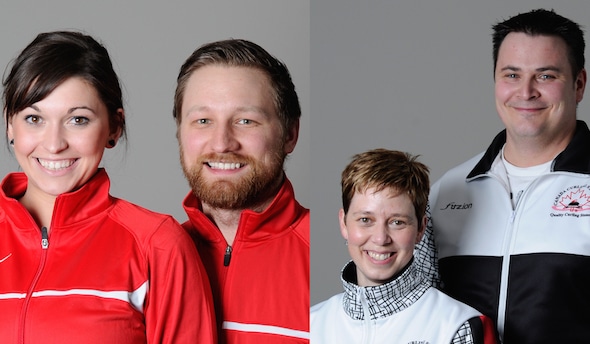 They’ll also be grappling with some new strategies, new rules and new approaches to the Winter Olympics’ newest medal sport. The World Curling Federation is using the New Zealand competition, which begins Monday in Naseby (one of two dedicated curling rinks in the country), as a testing ground for some dramatic rule-change proposals aimed at broadening the appeal of mixed doubles, which will debut as an Olympic medal sport in 2018 in PyeongChang, South Korea. “I think they’re trying to bring a departure from the traditional (mixed doubles) game,” said Calgary’s Charley Thomas, who won the 2015 Canadian mixed doubles crown with partner Kalynn Park. “The new rules are intended to get more crowd involvement and more variation in the game. Right now, it’s pretty straightforward with strategy, depending on whether you’re ahead of behind, so I think they’re trying to spice it up a little bit.” Wayne and Kim Tuck of Strathroy, Ont., will be the other Canadian entry in the 12-team, two-pool competition that wraps up with the gold-medal game on Aug. 27. They will be live streamed on the event website, www.wintergamesnz.kiwi/, beginning at 1:30 a.m. ET on Aug. 27. In a nutshell, here’s what’ll be tried out in New Zealand: • The timing system will be dramatically altered so that rocks are being delivered at the same time on all sheets. In essence, there will be a shot thrown every 30 seconds on every sheet. Twenty of those seconds will be considered “thinking time”, and to enhance the fan experience, music will be played in the arena. For the 10 seconds left, in which the shots will be thrown, the music will be turned off. As well, with all games being on the same clock, they will all have their between-ends breaks at the same time, allowing for more in-house music. “I think it’s going to be confusing,” admitted Kim Tuck with a laugh. “I’m glad we have the first draw off, and I think we’ll go down and watch to see how it’s played.” 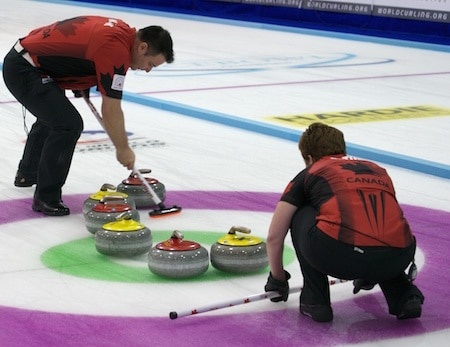 Wayne Tuck and Kim Tuck competing at the 2014 World Mixed Doubles Championship. New rules being tested in New Zealand mean that a skip will no longer be required to be in the house for shots. (Photo, World Curling Federation/Richard Gray)

• Teams will no longer be required to have one player in the house holding the broom for their teammate. Instead, the shooter can aim at a fixed point behind the sheet (for instance, the number 3 on the scoreboard), meaning that a rock can be swept immediately instead of waiting for the thrower to get up from the sliding position and chase down his or her rock to start sweeping. “I’m not sure we’ll utilize that a lot, just because we feel like we have pretty good brushing, even by ourselves,” said Thomas. “We feel like we’ll get more out of having someone dedicated to calling line as opposed to guessing while you’re following the stone.” “On some important shots where you have to really get around a guard (and more sweeping would help), it will be useful,” added Kim Tuck. “We practise enough at throwing without somebody holding the broom, I don’t think that will be an issue.” • For a standard end, there will continue to be a centre guard of the colour belonging to the team without last rock, and a rock in the rings belonging to the team with the hammer. But instead of being at the back of the button, the in-house rock will be positioned at the back edge of the four-foot circle. That should create more variation in strategy, which, to date, has revolved entirely around making a perfect freeze to the button with the opening stone of the end. “We’ve talked about the different scenarios, and I don’t think we really will come to a consensus until we’ve played a few games,” said Thomas “The game is just too variable. It’s going to take some playing to figure out the best strategies.” • Most intriguing is the introduction of the “Powerplay End.” Each team will have one opportunity to use a Powerplay during the standard eight ends, and only when they have the hammer. The Powerplay means that instead of the standard pre-end positioning of the stones, a team with the hammer can instead choose to place one of their rocks in the rings, with the back edge touching the teeline, and sitting half in the eight-foot and half in the 12-foot, while an opposing team’s stone will sit as a perfect corner guard. “It might be a good tool if you get ahead late in the game,” said Kim Tuck. “One of the biggest things in mixed doubles is trying to defend a lead; it’s super easy to play (and come back) with rocks in play, but it’s harder to get a lead and stay in the lead. So this rule might be something to use later in the game with hammer.” After the New Zealand competition, the proposed rule changes will be assessed, discussed and potentially voted upon during the World Curling Federation’s Congress, Sept. 2-5 in Belgrade, Serbia. “I think it’s pretty exciting just to try something different,” said Jeff Stoughton, who earlier this week was named Curling Canada’s Program Manager, Mixed Doubles. “Any of the mixed doubles that I’ve watched, it seems like all the shots come to the centreline. With this Powerplay, it’ll force teams to throw inside-out, to go to the corner at least twice during a game, if you ever call it. I think it’s worth a try. We know there will be offence, but will it generate a different strategy in the game? It’s a nice change. I think the biggest one is not having to have a player in the house, so that the players can converse close together. It’s a great idea. You’ll get someone to sweep the full shot from start to finish.” Just by virtue of the Maple Leafs on their backs, the Canadian teams should be favoured in New Zealand, although the Thomas-Park team may not be in peak form as Thomas continues to recover from a broken fibula in his sliding leg that he suffered in a stumble three hours before his flight home from last April’s World Mixed Doubles Championship in Sochi, Russia. “I mean, I’m not going to be at my best, probably, for a year since the accident,” he said. “I’d say I’m around 95 per cent, but it’s still always kind of in my mind — I’m still conscious of the injury, but that’s the same in any sport.” Still, both teams head to New Zealand with confidence, and both are excited about the future as Canada starts down the road to building its mixed doubles program for the 2018 Winter Olympics. “We want to be on the podium (in New Zealand), for sure,” said Kim Tuck. “I think it’s important for mixed doubles in Canada for both teams to do well. And I think if you asked either one of us, we’d say that we’d expect it to be Canada vs. Canada for the gold. That’s what we’re shooting for.” More info on the Audi quattro Winter Games New Zealand can be found at www.wintergamesnz.kiwi/