Mixed doubles in the spotlight in Portage

While a crowd in Portage la Prairie, Man., settled in to watch Saskatoon’s Steve Laycock face Calgary’s Kevin Koe in the final of the Canad Inns Men’s Classic on Monday night, a different set of athletes was arriving in town to start another event; the first of its kind; the following morning. 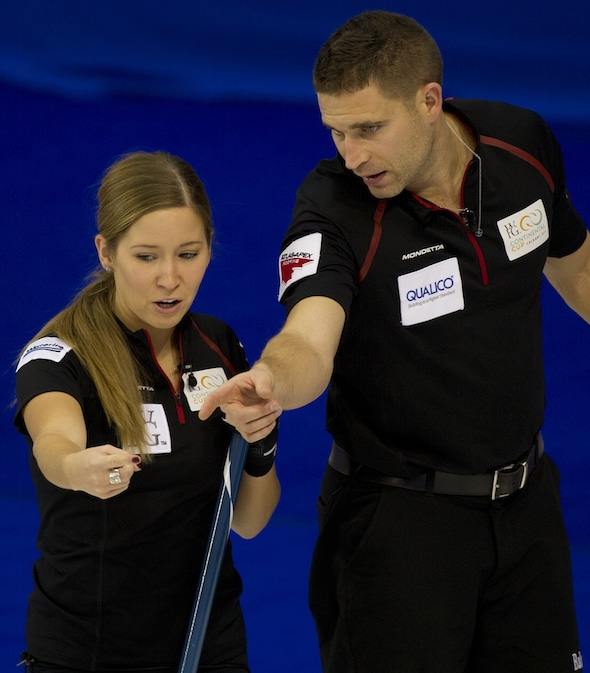 Following the Men’s Classic, Canad Inns was generous enough to sponsor a second event in Portage, inviting some of the country’s top Mixed Doubles pairs, and some of the top players in the traditional game who have teamed up to try the new discipline. Many of the female players were arriving for the Canad Inns Women’s Classic, which begins Thursday. The Canad Inns Mixed Doubles Classic is the first major cash bonspiel aimed at providing top competition outside of the traditional mixed playdown format. While some clubs have held Mixed Doubles bonspiels, or even host leagues, this is the first attempt at a major cash event, like the World Curling Tour events that we see across the country every weekend. It’s part of the building to the introduction of mixed doubles curling as a full medal sport at the 2018 Winter Olympics in PyeongChang, South Korea. “It’s a really exciting opportunity to play against some big names and have a chance to win money to help with travel expenses,” said Kalynn Park, part of the current Canadian champion duo. “Most importantly, it’s making a name for the discipline leading into the next Olympics.” Calgary’s Park, along with teammate Charley Thomas, won the Canadian Mixed Doubles title in March 2015, and went on to finish fourth at the World Mixed Doubles Championship in Sochi, Russia. They also claimed gold at the Audi quattro Winter Games New Zealand a few weeks ago. Outside of national playdowns, however, there hasn’t been much attention paid to the discipline… until now. The Portage event is just the first high-profile cash bonspiel for mixed doubles athletes. Another is planned in Oshawa, Ont., in mid-November while top players assemble there for a Grand Slam event. Both the Canad Inns Classic and Oshawa’s Wall Grains Mixed Doubles classic will award more than $20,000 in prize money. Another mixed doubles event in Toronto in March is guaranteeing at least $10,000 in prizes. It has come a long way since the format was invented a little more than a decade ago. Other than Park and Thomas, the Portage event includes some familiar names from the standard game’s top teams. Two-time Canadian champ Rachel Homan will play with Olympic gold-medallist and reigning Tim Hortons Brier champ John Morris. Olympic gold-medallist Jennifer Jones  will team up with her husband, Brent Laing, a world champion in his own right. Jones’s Olympic teammate Kaitlyn Lawes is playing with curling legend Jeff Stoughton, who is also in charge of mixed doubles development in Canada. “It’s fantastic to see Canada getting on board with mixed doubles bonspiel,” said Lawes. “Now with mixed doubles being an Olympic sport I think this is a great start for the sport to grow leading up to 2018.“ These bonspiels are the start of a new ranking system strictly for the pairs format, which is a good thing according to 2014 Canadian Mixed Doubles champ Wayne Tuck. “Mixed doubles is trying to become its own entity and being able to get points from these events is huge for a ranking system,” he said.  “Mixed doubles needs to accumulate their own points instead of taking them from the regular curling circuit.” His wife, and mixed doubles partner, Kim echoed his sentiments. “In order for Canada to keep up and put our mixed double teams on the podium it’s important for development to have events for players wishing to commit to this discipline to play,” she said. “Mixed doubles is a different game and while it shares the same principles of the regular game it has its own quirks.“ Competition starts Tuesday morning, and finishes Wednesday night. Scores are available by clicking here. Oh… and Laycock beat Koe in the men’s final in Portage, and took home $18,000. Other weekend men’s winners were Team Sean Geall of New Westminster, B.C., at the Hub International Crown of Curling in Kamloops, B.C.; Team Codey Maus of Toronto at the Stroud Sleeman Cashspiel in Stroud, Ont.; and hometown favourites Team Aaron Sluchinski at the McKee Homes Fall Classic in Airdrie, Alta. On the women’s side, South Korea’s Un-Chi Kim won the Hub International Crown of Curling in Kamloops; Team Darcy Robertson of Winnipeg won the Atkins Curling Supplies Women’s Classic in Winnipeg; and Team Julie Tippin of Woodstock, Ont., won the Stroud Sleeman Cashspiel in Stroud.