Another weekend, another win for Team Gushue

New season. Different Team. Same story. One year ago, the curling world was marvelling at the run that Winnipeg’s Mike McEwen was on to start his season. His team was winning practically every event it played in, and rarely lost a game along the way. And while Team McEwen is still the World Curling Tour No. 1, having won two of its first three events this season, Brad Gushue’s incredible start has got his St. John’s foursome in striking distance of the top spot. 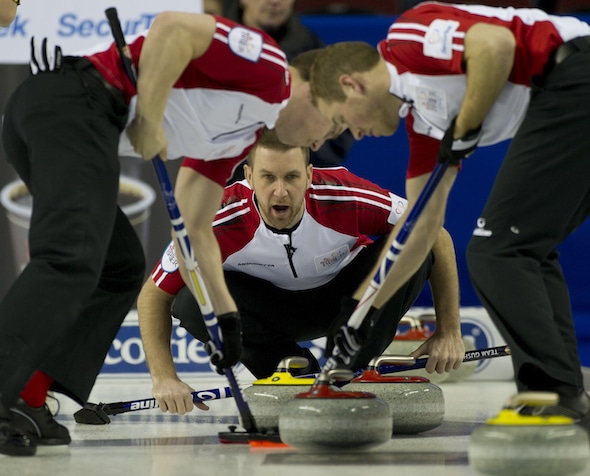 Gushue, with his team of Mark Nichols, Brett Gallant and Geoff Walker, already had a healthy lead in the Canadian Team Ranking System standings after winning three of their first four bonspiels this season. The only one they didn’t win (runner-up to Kevin Koe at the Grand Slam of Curling event in Paradise, N.L.) was actually the most valuable due to the fact that it had the highest strength of field, and was therefore worth the most possible points. This weekend, Gushue was in Gatineau, Que., for the Challenge Chateau Cartier de Gatineau and the roll continued. Marching his way through the draw, the Newfoundland foursome finished with a 7-0 record, defeating Sarnia, Ont.’s Mark Bice in the final. The win earned Gushue another 58.437 CTRS points and $12,000, while Bice took home $8,000 and 45.915 points. Also in the field, Summerside, P.E.I.’s Adam Casey reached the playoffs for his first major score of the year. After losing the semifinal to Bice, Casey took home 35.4799 points and $5,000. Pat Simmons and his Team Canada rink from the 2015 Tim Hortons Brier failed to qualify for the playoffs. Meanwhile in Portage la Prairie, Man., Jennifer Jones welcomed back Dawn McEwen from maternity leave at the Canad Inn’s Women’s Classic, and the team immediately found the form it had been searching for in recent events. Jones qualified through the B-side, but knocked off Erika Brown (U.S.), and Tracy Fleury (Sudbury, Ont.) in the playoffs. Jones, along with Kaitlyn Lawes, Jill Officer and the returning McEwen, lost the final to Korea’s EunJung Kim but still took home $10,400 and 45.117 points, enough to push them back into the mix near the top of the CTRS women’s list. Ottawa’s Rachel Homan is off to a red-hot start and has a massive lead on the rest of the field. Her team had the weekend off. In other events… — Oromocto, N.B.’s James Grattan won the Curling Champery Masters bonspiel in Switzerland. By defeating Bern’s Reto Keller 5-4 in the final, Grattan’s squad won the equivalent of $17,495 Cdn and 34.602 CTRS points. — Edmonton’s Kelsey Rocque continued her hot season with a win at the Red Deer Curling Classic. She took down Switzerland’s Alina Pätz in the final, and earned a $9,000 payday, along with 40.413 CTRS points. She currently sits in second place behind Homan. Calgary’s Chelsea Carey lost the semifinal and earned $4,000 and 24.537 points, which keeps her in third on the rankings. Edmonton’s Mick Lizmore won the men’s event in Red Deer, taking home $10,000 and 35.791 points.