It’s safe to say the season is in full swing at this point. Considering the top curling teams have been on the competitive circuit for nearly two months now, the teams playing in the Grand Slam Masters of Curling in Truro, N.S., should officially be in “mid-season” form. 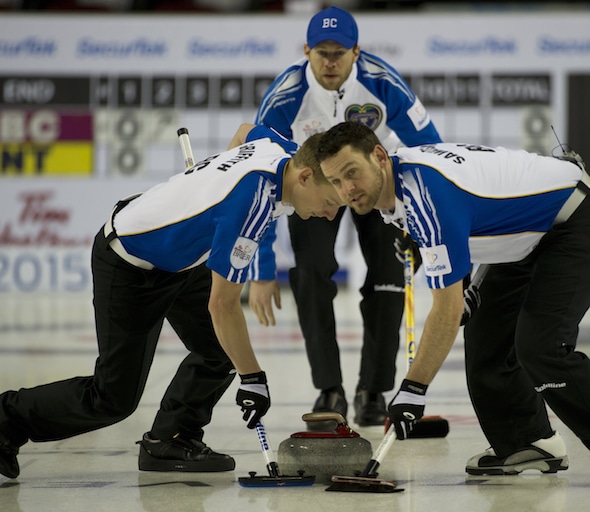 Skip Jim Cotter, top, and his teammates Tyrel Griffith, left, and Rick Sawatsky are off to a solid start at the Grand Slam Masters of Curling in Truro, N.S. (Photo, Curling Canada/Michael Burns)

As with all the Grand Slam events, the field is full of Olympians, world, national, and provincial champions, and many of them have been cashing in consistently on the World Curling Tour. Brad Gushue (St. John’s) is off to an amazing start to his season (four event wins; currently ranked No. 1 on the Canadian Team Ranking System), and has started the Truro event with two wins. Winnipeg’s Mike McEwen, the current World Curling Tour Order of Merit No. 1, has also had a great start, and has won his first three games. Vernon, B.C.’s Jim Cotter has also won his first two games, while Sweden’s Niklas Edin, the reigning world men’s champion, is also 2-0. As the weekend gets underway, it will be a question of who emerges from the middle of the pack. Edmonton’s Brendan Bottcher, Winnipeg’s Reid Carruthers, Penetanguishene, Ont.’s Glenn Howard, and Toronto’s John Epping are all in the mix with their first win, but it will take three wins to qualify for sure (although, some two-win teams may sneak through). On the women’s side, the Canadian Big Three of Rachel Homan (Ottawa), Jennifer Jones (Winnipeg) and Val Sweeting (Edmonton) are all off to 2-0 starts. Homan is running away with the CTRS lead, while Jones and Sweeting are back with the crowd. Sweeting has one event win this year, while Team Jones has been slower than usual out of the gates while missing lead Dawn McEwen to a maternity leave. McEwen returned last week in Portage la Prairie, Man., and the Jones rink made it all the way to the final, where it lost to South Korea’s EunJung Kim. Kim is also in the Slam field this week, and is also 2-0. Both the men and women feature three pools of five teams. They’ll play a round robin and the top eight teams overall will advance, for a chance to claim a chunk of the $100,000 purse.