Sun Parlour Curling Club in Leamington, Ont., was giving off a special glow this past Halloween. With Jet Ice’s fluorescent paint on the rings and hog lines, curlers donned dollar store glow-sticks, turned down the regular lights, cranked up the black lights, and took to the ice for a bonspiel devoted to eye-popping glow-in-the-dark curling. 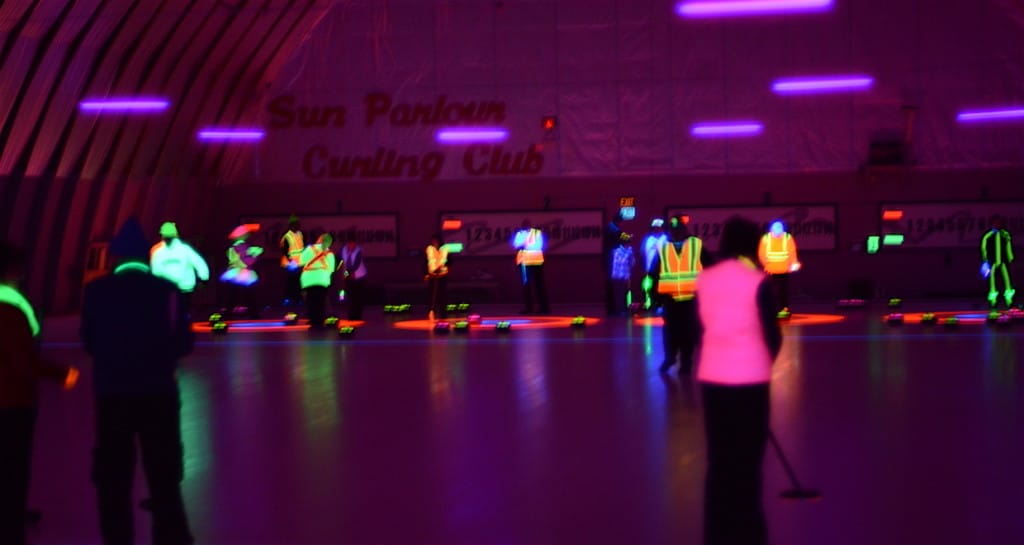 A few years ago, Sun Parlour’s Roy and Melissa Paine, conveners of the Friday Night Fun League, were looking for something new to offer curlers. The idea of glow-in-the-dark curling had its appeal, but they worried about safety issues. Then they saw a notice for a “black light” bonspiel at the Elmira Curling Club, signed up a team, and went off to Waterloo Region to find out what it was all about. “The whole event hinges on black lights and luminous paint purchased from Jet Ice,” says Carole Thomson, Sun Parlour’s social media communicator. By blacking out the light sources from the clubhouse, the fluorescent paint catches the black light and voilà! A whole new curling experience! “We hand out necklaces and bracelets to each team,” says Thomson. “Each skip and vice get a thicker glow stick to show the handle turn and also a strip of neon Bristol board to attach to their broom to give the person throwing the rock something to aim at.” The result is a spiel with a fun, relaxed vibe. “It is an open spiel for us,” she says. “Teams can be all women, mixed, all men, kids, etc. It’s for people who love the game to come out and enjoy the day with like-minded people. It is just a little something different than the average spiel.” 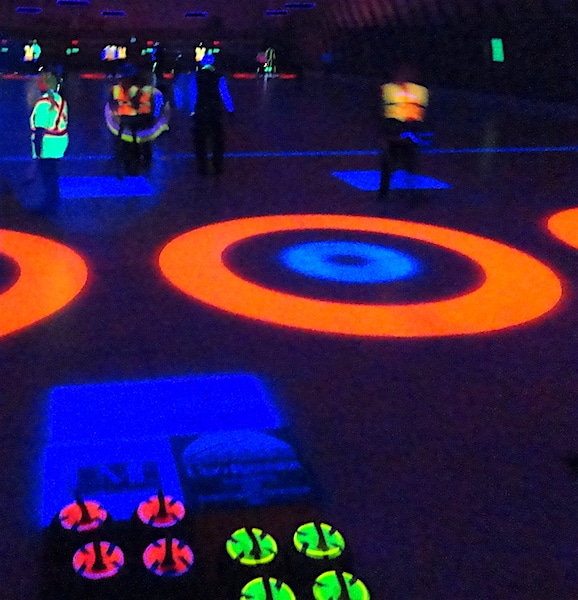 Dave Loverock, vice-president of Jet Ice, in Newmarket, Ont., is used to providing coloured paint for curling rings, but using one of the company’s eight special fluorescent pigments gives clubs an opportunity to do something different. “Curling has been around for so long and it’s so often the familiar red and blue circles,” he says. “We’re trying to make the curling club look a bit different. Making it pop!” And pop it will, once the lights are turned down and the special pigment reacts to black light. “When you bring the lights down, it shows,” he says. “It’s permanent, but only shows when you turn on the black light.” Installation of the special paint doesn’t take long, but it has to be done at the initial ice-making stage, says Loverock. Interested curling centres need to make plans before ice preparation begins in order to have their glow-worthy rings in place for events throughout the season. Thomson cautions that setting up the ice for glow-in-the-dark curling does have some costs, so small clubs with financial constraints may find it difficult, but not impossible. “Go to your board and ask them to invest,” she says. “We were lucky that we had a progressive board. Be prepared to spend money on trying out some ideas that end up not working, but keep trying. Understand that it will take time to get the word out, and also don’t be disappointed if some of your members don’t want to try it. It is not everyone’s cup of tea.” Sun Parlour knew that the nearest club set up for glow-in-the-dark curling was over three hours away, so they were able to attract participants from a fairly large region without “stealing” curlers from other clubs’ events. 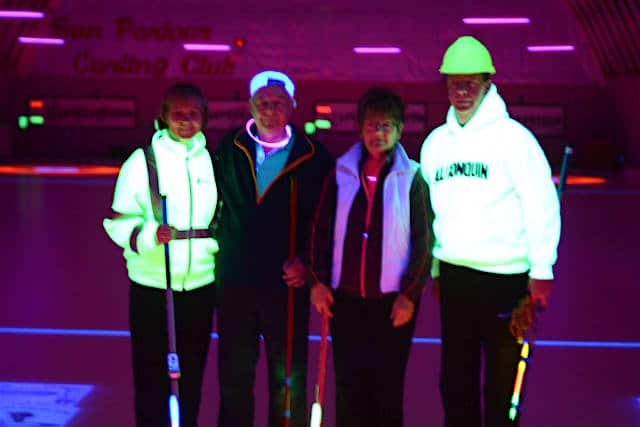 “Each skip and vice get a thicker glow stick to show the handle turn and also a strip of neon Bristol board to attach to their broom to give the person throwing the rock something to aim at.” (Photo courtesy C. Thomson)

“And finally,” Thomson warns, “be aware that this is a novelty of sorts, it will be fun for the first few years, but be prepared that over time, the novelty will wear off and you likely won’t be able to sustain more than one one-day spiel.” Thomson says the club used their Facebook and Twitter feeds, as well as the website, to promote their event on social media. Flyers were also sent to other clubs. And it paid off. Not only was their event a success, they planted the idea in in the minds of some of their visitors, too. “We had several clubs and organizers contact us and ask questions about the glow spiel,” she says. “We were more than happy to answer their questions.” “We run two spiels a year, or are trying that out,” she adds, “and the benefits are that we were able to bring in people who may not have necessarily looked to us for a bonspiel opportunity. We have even enticed some teams from the U.S., and we hope to send some teams to their rinks as well to pay back the favour.” “We get a lot of new curlers to this event, which I like to see,” says Thomson. “As a relatively new curler, I was interested in a spiel where the focus was on fun and not necessarily strictly on who the best team is,” she says, “and I think we found that with this spiel.”