Welcome to Magical Question Fun Time, the new Curling Canada feature in which comedian John Cullen sits down with your favourite curlers for interviews like you have never seen. Each interview will feature eight questions: five standard questions that will be asked to each curler, two questions specific to that curler, and one question provided by the curler interviewed previously. This week, John sits down with Reid Carruthers, current Manitoba champion and about as decorated a curler as you’ll find, having won the Manitoba Junior title in 2003, the Manitoba mixed title in 2008, and the Canadian and World Championships in 2011. Carruthers has been to the Brier five times(once as an alternate and four times as a player), including a second-place finish in 2013 and a bronze in 2014. Last season, he appeared at the Brier for the first time as a skip. 1. What’s the nicest shot you’ve ever been a part of? Reid Carruthers: It maybe wasn’t the nicest pure shot, but when Jeff made the double takeout to seal our Brier win in 2011, that was really special. It’s the most memorable shot I’ve been a part of in my career because it meant so much to win the Canadian championship. (Check out a video recap of the 2011 Tim Hortons Brier here; Jeff Stoughton’s “really special” shot is at 10:38). John Cullen: I’ve swept some big shots in my career, but nothing close to that. What’s even running through your mind then? RC: Yeah, you’re pretty much borderline screaming with your mouth closed, just standing there knowing you have this shot to win the championship. To be honest, I was mostly thinking that I really shouldn’t burn it. (laughs) JC: That’s true, I mean, you sweep thousands of rocks in a season and probably never once think about burning it, but then it comes down to that and… RC: Exactly. I think our team burned so few rocks too that season, maybe two or three? But you can’t help but think of just trying not to screw it up. Luckily Steve (Gould, lead for Stoughton) was there and he had been there a few times before. He actually made a little joke as the rock was heading down the ice and helped me stay loose. 2. Who could you take in a fight? 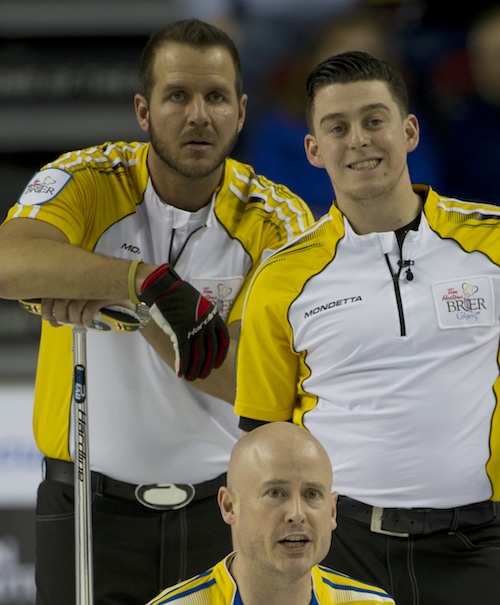 RC: Definitely Colin Hodgson, my lead. (laughs) I don’t think I would take any of the other guys on my team, they’re both pretty big guys, but Colin’s pretty weak. He might have some sneaky strength, but he’s one of those guys who doesn’t intimidate me, his charm and good looks won’t help him. JC: (laughs) It’s always good to fight a guy who would be more concerned about what you did to his hair than his face. RC: (laughs) Exactly. I think going into a fight knowing you can win at any time just by pulling a guy’s hair is about as confident as can you get. And I would do it, too. (laughs) 3. If a deli named a sandwich after you, what would be on it? RC: Just a lot of meat, I think. It’s no secret looking at me how I got this figure. I’d say four or five types of meat for sure. JC: What meat absolutely has to be on there for you, and would you have any veggies? RC: Oh no, zero veggies. This thing is taking you two or three hours to digest, no need to mess it up with vegetables. Just meat, cheese, sauce. I think corned beef is the one meat that would for sure be on there. Everyone loves a good corned beef sandwich. JC: And what would you call it? RC: Probably the Meatarian, something like that. JC: How about Reid-atarian? Reid rhymes with meat and then you have that personal touch on there. RC: I like that. Rama-tarian, I’m open. 4. What’s the worst job you’ve ever had? 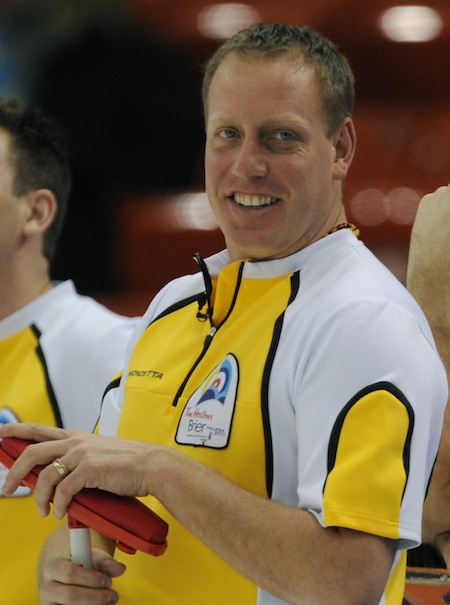 RC: I’ve had lots of bad ones. Does carrying the brooms on Team Stoughton count? (laughs) If it does, that was the worst one for sure. Regular job-wise, I was the night janitor at a bank for two years when I was 16 to 18. That was the worst for sure. Cleaning washrooms is not ideal. And a lot of people probably think that the men’s washroom would be gross, but it wasn’t even close. The ladies’ was WAY worse. They’re disgusting in there. (laughs) JC: Did you ever have any fantasies about robbing the bank, being around all that money? RC: I mostly had nightmares about guys coming in while I’m cleaning the bank and killing me to get to the money. (laughs) I’m 16 and alone in a bank, I don’t think I would offer much resistance. JC: And what about carrying the brooms on Team Stoughton? Why was that so bad? RC: Ugh, don’t get me started. The worst part was that it’s not even my job. As you know being a lead, that’s your job! But Steve pulled some veteran moves and weaselled the job onto me. JC: (laughs) That Gould, eh? What did he do? RC: He just did a really terrible job at it. (laughs) He would leave the brooms everywhere so we’d be minutes before the game and I’d have no idea where the brooms were, it was just the worst. I’m really anal about having things prepped before a game, so eventually I just started doing it. I still think he screwed it up on purpose so he wouldn’t have to do it. (laughs) 5. If you had entrance music, what would it be? RC: I’d probably go with something hard and heavy, I’m a big fan of heavy rock. I think I would probably go with Disturbed, “Down With the Sickness”. I think most of our fans would totally hate it, given their average age and probably their musical taste, but I think it would be pretty awesome. JC: I think it would be even better if you came out singing the “ooh-wah-ah-ah-ah” part too. RC: (laughs) I’ve done some singing in my day, but I’m not sure I can hit the Disturbed notes at all. Maybe I’ll rock a little air guitar or something. 6. Now onto the Reid Carruthers-specific questions, and I have to admit that normally I try to find some dirt on guys through their teammates to surprise them with in the interview, but your boys were abnormally quiet. Did you threaten them or something? RC: As a teacher, this makes me feel pretty good, like I’ve done some things right. They’re learning, good boys. I told them they have to represent us well, and it appears they’ve done that. I’m a proud teacher and skip right now. (laughs) JC: Well, I’m less proud because the questions aren’t as good as they could be, but I’ll take what I can get. So, first question: do you love your dog more than your teammates? RC: Ummm…(laughs) yes. Definitely yes. The reason I say yes is because my dog, Jake, can do basically whatever he wants and I’m okay with it, like rip up my kitchen floor with his teeth, which has happened, and if say, Colin was gnawing on my floor with his teeth….I wouldn’t feel so welcoming. JC: (laughs) And you can beat him up. RC: (laughs) Exactly. 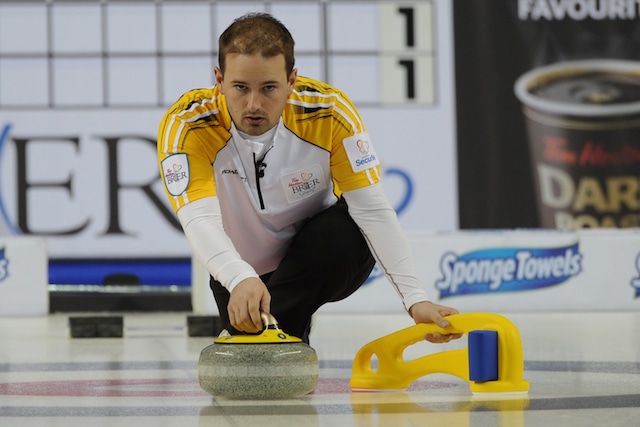 7. Now, most people have operated under the assumption that anyone who uses a crutch is lame. However, you are well-known for having invented your own crutch, the Pro-Slide, and so I’m wondering: do you think the only way to seem not lame for using a crutch is by inventing your own? RC: I think so, definitely. I mean, people can say whatever they want about what it looks like sliding with a crutch, but some of these guys are using decades-old corn brooms that are falling apart and no one says anything to them, so what gives? I think it’s pretty cool to see kids using it, and to have people tell me it’s helped them make more shots, and that’s really rewarding. I’ve been lucky enough to have a lot of success with it, so hopefully it’ll just be the next cool thing. 8. Alright, now it’s time for the question asked by the previous player. Since this is the first MQFT for Curling Canada, I don’t have one asked by a curler, but I can defer to the last hockey player I interviewed, Karly Heffernan. And it’s a great question. What is your favourite song by a diva? So someone like Beyoncé, Mariah Carey, etc.? RC: It’s funny you said Beyoncé, there’s definitely some very good Beyoncé songs, but if you consider Taylor Swift a diva… JC: I definitely do. RC: (laughs) Okay, then my pick is “Shake It Off”. Especially with all the broom controversy happening right now, and people having things to say…sometimes you just have to shake it off. Plus it’s a great song. JC: Alright, fantastic Reid, and now I need a question from you for my next interviewee. RC: Okay. Who is the biggest jerk that you’ve ever curled against and why? JC: WOW. Just a huge sewer question right off the bat, I love it. RC: I want people to sweat a little, and I want someone to be called out. JC: Who would your answer be? RC: I think I’ve actually fulfilled my contractual obligation and answered eight questions, so I’ll take a pass. Let’s just say that playing at the level I have, you get the opportunity to play some guys a lot, and you develop a lot of respect for those guys, but maybe you don’t want to hang out with them all day, every day. (laughs) That’s all I’ll say. JC: Awesome, thanks Reid! Best of luck with the rest of the season and thanks for joining us on the first-ever curling version of MQFT! Stay tuned for more interviews throughout the year!