B.C. to play for women’s gold at 2016 Canadian Juniors

STRATFORD, Ont. — It will be a battle of youthful skips to decide the women’s gold medal at the 2016 Canadian Junior Curling Championships, presented by Egg Farmers of Ontario. 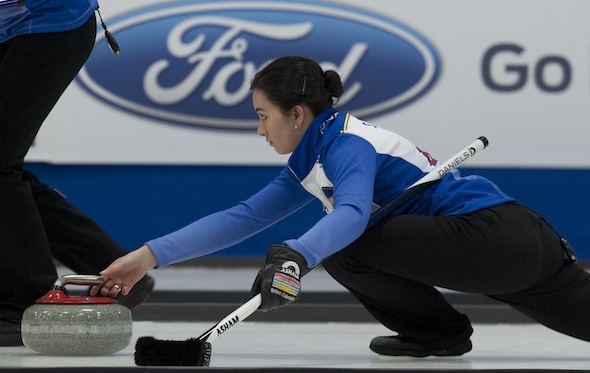 Sixteen-year-old Sarah Daniels and her B.C. team from New Westminster will take on Nova Scotia’s 17-year-old skip Mary Fay of Chester for the Canadian title on Sunday, 10 a.m. (all times Eastern) at the Stratford Rotary Complex (live on TSN/RDS2).

The final pairing was set on Saturday when B.C. cruised to a 7-3 win over New Brunswick’s Justine Comeau in the women’s semifinal.

For Van Osch, it will be a chance to complete her Canadian Juniors medal collection — she won a bronze in 2012 throwing second rocks for big sister Kesa at Napanee, Ont., and silver in 2014 in Liverpool, N.S., playing third for her other older sister, Kalia.

B.C. took control of the game early with a stolen deuce in the fourth end when Comeau, 17, rubbed on a guard in her attempt to hit and stick for a single.

“They played a lot better than us,” conceded Comeau, whose Fredericton team is rounded out by third Emma Le Blanc, second Brigitte Comeau, lead Keira McLaughlin and coach Tim Comeau. “I had a pick early in the game and that rub in the fourth end. But they played really, really well. It would have been tough to beat them today.”

Hawes was scored at a perfect 100, while Sarah Daniels — the first-team all-star skip — continued to impress with her shot-making and game-calling.

“She’s mature beyond her age; nobody ever thinks she’s 16,” said Van Osch of Daniels, who also was a member of the 2014 silver-medal team. “I don’t even think of her like she’s 16. I always think she’s my age. But she fits in well with the rest of us, she’s very mature and she calls a great game.”

There’s a history between B.C. and Nova Scotia at this event; this year, B.C. was the lone team to defeat Nova Scotia. And two years ago in Liverpool, Sarah Daniels and Van Osch helped B.C. beat the Fay-skipped Nova Scotia team in the Canadian junior semifinal.

Van Osch said the current B.C. team was put together with an eye on the 2017 Canadian Juniors in Victoria.

“It was always a building year for us, looking to next year when we were really going to be going for it,” she said. “So this is almost exceeding expectations.

“But I think we’re ready; I don’t see why it can’t be us. They’re (Nova Scotia) a very good team; you just have to play your own game, play the best you can and see what happens.”

As for Comeau, she and her young teammates (no one is older than 17) head home with bronze and excitement about the future.

“Oh, for sure,” she said. “I’m really happy with how we did this year. I’m just happy with being third place in the country. That’s a really big accomplishment for a team our age. We just can’t wait to see what the future holds.”

Nova Scotia will be playing for its fourth national junior women’s title, and first since Jill Brothers (Mouzar) won in 2004.

Sunday’s gold-medallists will represent Canada at the 2016 World Junior Championships in Taarnby, Denmark, in hopes of defending the gold medals won last year by Canada’s Kelsey Rocque and Braden Calvert.

All players who didn’t make the playoffs are taking part in a mixed doubles tournament beginning Saturday at 10 a.m.