Another loss for Team Canada at World Wheelchair Championship

The struggles continue for Team Canada at the 2016 World Wheelchair Curling Championship, as they gave up two stolen ends on the way to a 10-2 loss on Thursday afternoon in Lucerne, Switzerland. 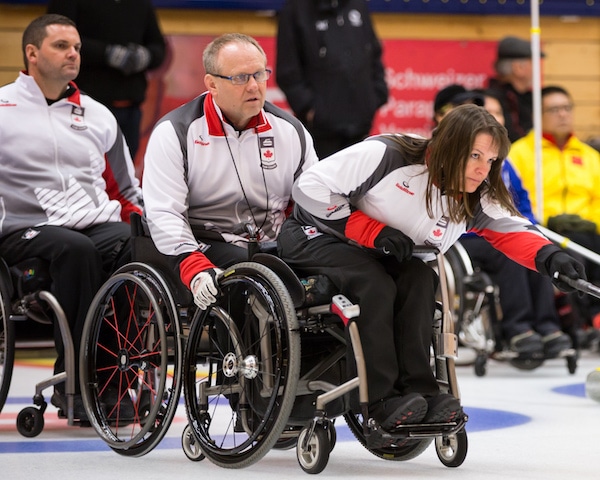 Team Canada – skip Jim Armstrong, third Ina Forrest, second Dennis Thiessen, lead Mark Ideson, alternate Sonja Gaudet and coach Wayne Kiel – kept it close for the first four ends and trailed by two at the break. After forcing Finland to one in the fifth, Canada gave up two costly steals, putting the game out of reach. “Once again we got off to a tough start, but I’ll tell you, I’ll give Finland full marks. That’s the best I’ve seen any team play out here this week,” said Armstrong. “They threw the nice, natural, positive rock and that’s where we’re getting caught. We’re just a little soft or over on everything and you just can’t do that on this ice.” Armstrong said the team has been struggling with ice and rocks. “That’s our cross to bear, it’s certainly no reflection on the competition,” he said.  “We’ve just been outright outplayed, pure and simple. We want to finish the week on a positive note going forward, but make no bones about it, it’s been a tough week. Nobody feels worse than we do about it but the sun always comes up the next day so we’ll be okay.” “You know, points are still important for the future, so we’ve got to come back competitively and hopefully we will,” he said, adding that the team might juggle the line-up a little. “We really thought after yesterday we’d regrouped but we just got off to a soft start today and just never recovered.” With the loss, Canada’s journey to the playoff round becomes more difficult. They now sit at the bottom of the standings. Switzerland (7-0) remains undefeated at the top, followed by Norway, Russia, Korea and the United States. The round robin continues on Friday, when Canada faces Russia (5-2) at 2:30 a.m. EST, and Norway (6-1) at 7:30 a.m. EST. The 10 teams will play a round-robin draw that concludes on Friday. Tiebreakers, if necessary, and the top four teams advance to the Page playoff games, which will be played on Saturday, with the semifinal, bronze- and gold-medal games on Sunday. Live scoring, team line-ups and the schedule are all available on the event website, www.worldcurling.org/wwhcc2016.