OTTAWA – It was not the start that Wade Kingdon and his Nunavut team had hoped for in their territory’s debut Thursday at the Tim Horton Brier. 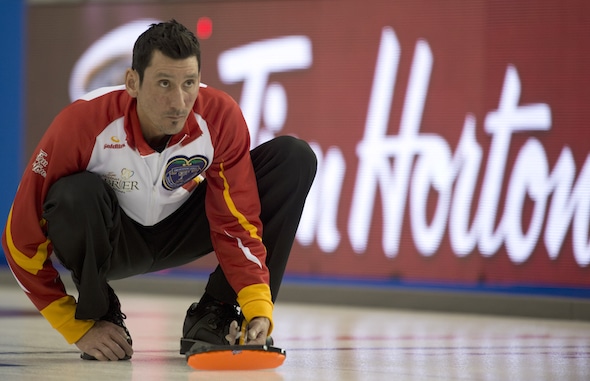 Kingdon, third Dennis Masson, second Aaron Fraser, lead Bruce Morgan, alternate Chris West and coach Greg Corrigan gave up four in the first end and four more in the third in losing 13-2 to Jamie Koe of the Northwest Territories. “It’s not the start we had looked for but we played our game, had some fun,” Kingdon said after the pre-qualifying game. “We missed on some key opportunities that we couldn’t capitalize on. Tomorrow’s another day … we’ll see if we can give it a better performance.” Nunavut is in its second year of eligibility in the Tim Hortons Brier (the territory chose not to send a team to Calgary last year), and Kingdon had been hoping to have the same debut as its women’s team at the Scotties Tournament of Hearts. Geneva Chislett beat British Columbia 8-7 in Nunavut’s first-ever game at the Scotties. Koe, third Chris Schille, second Brad Chorostkowski and lead Robert Borden took advantage of a couple of costly misses by Nunavut to get four in the first end. The veteran Koe, in his 10th Brier, made a clean pick of Kingdon’s only stone in the house to get four more in the third. “We got off to a good start, couple of good ends early and then just hit it out,” said Koe. “It’s tough to play them like that, but they made a lot of nice shots and hopefully they get some confidence for tomorrow.” 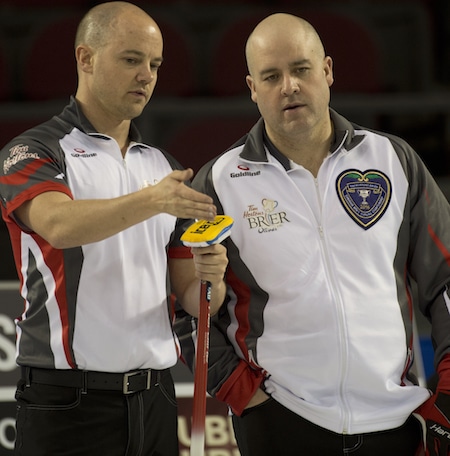 From there, the Koe foursome played a take-out game to keep the score down, but still ended up stealing points in the next four ends. “Not a lot of fun, but it’s the first game and we’re trying to stay sharp and make shots to learn the ice,” said Koe. “But you’re trying to help out your friends, to help them pick up on the ice. I think they were getting it in the end.” Kingdon agreed his team is not used to arena ice but said it’s great ice to play on. “It’ll take some time to get our mojo and figure out the right calls to make.” In the other game Thursday evening Jamie Murphy and his Halifax, N.S. team of third Jordan Pinder, second Scott Saccary, lead Phil Crowell, alternate Alan Darragh and coach Bruce Lohnes scored four in the third and went on to beat Robert Smallwood of Yukon (Whitehorse) 11-3. The four teams play a single round-robin, with the teams with the two best records advancing to the play-in game Saturday at 2:30 p.m. (all times EST), concurrent with the opening draw of the Tim Hortons Brier main round-robin. The winner of that play-in game moves into the main tournament draw. Friday’s qualifying draws are at 7:30 a.m. and 4:20 p.m.. The preliminary round of the Ford Hot Shots goes at 2 p.m, For ticket and other event information, visit https://www.curling.ca/2016brier/tickets/ For the complete schedule, go to https://www.curling.ca/2016brier/draw/ This story will be posted in French as soon as possible at https://www.curling.ca/2016brier/?lang=fr TSN (RDS2 in French), the exclusive television network for Curling Canada’s Season of Champions, will provide complete coverage of the 2016 Tim Hortons Brier