Mary Fay is showing the world that her gold medal at the recent Youth Olympic Winter Games was no fluke. The young Canadian skip and her Nova Scotia teammate Karlee Burgess are fresh off one international podium finish and they’re working hard to achieve another at the 2016 World Junior Curling Championships. 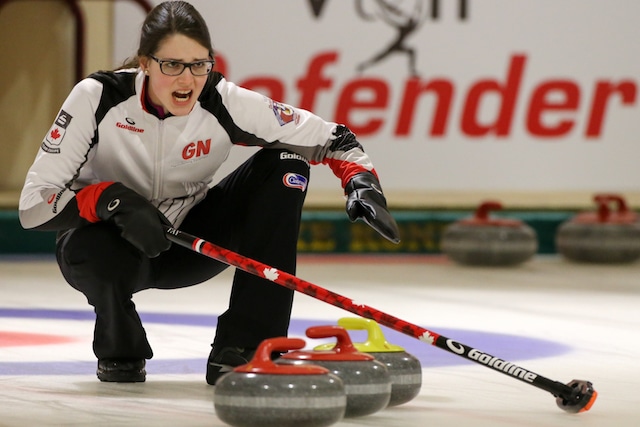 “It was our goal for the year to win the Canadian Juniors and go to the World Championships,” said Fay, who brought in alternate Sarah Daniels – the B.C. skip she defeated at the Canadian championship – to play third in the ninth end of a 10-3 win over Turkey on Tuesday morning. “It was our goal but you never expect too much, so we’re really happy with this.” Fay, Burgess and their Chester, N.S., team of third Kristin Clarke, lead Janique LeBlanc, alternate Daniels, coach Andrew Atherton and team leader Andrea Ronnebeck are still undefeated after winning both their games on Tuesday. They scored four points in the fifth end on the way to a 9-3 victory over Hungary’s Dorottya Panalcsa in the evening game. Sitting on top of the standings is great, but Fay is not taking anything for granted. “I have faith in my team that they can play well and compete against all of these teams,” she said. “But there’s a lot of great teams here and any one of them can take the Championships. I think it’s going to come down to who can play well for the whole week.” After three days of round robin competition, Team Canada women remain in first place in the standings with a 5-0 record, 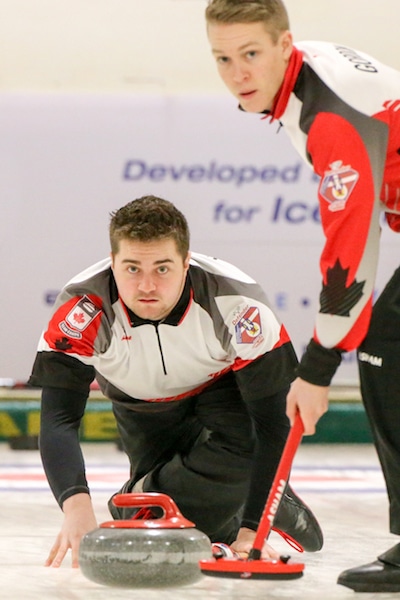 On the men’s side, Matt Dunstone and his Winnipeg squad of third Colton Lott, second (and vice-skip) Kyle Doering, lead Rob Gordon, alternate Wade Ford, coach Calvin Edie and team leader Brian Chick, had another tough day. After losing on a stolen end to Scotland on Monday, Dunstone and crew lost another on Tuesday after giving up five points in the eighth end in a 7-2 loss to Switzerland’s Yannick Schwaller. “It was just one end,” said Dunstone. “We had control of the game early on and just couldn’t capitalize on a couple of opportunities in that eighth end obviously, so it was just one bad end, but I think we take a lot of positives out of how we played today. “ We’re okay with it,” said Dunstone about the team’s 2-2 record so far. “We knew were going to face some tough competition early on, but I think we’re getting better slowly.” Team Canada men have faced some of the toughest competition early in the round robin, but Dunstone said the team is more focused on fine-tuning their own game, rather than worrying about who they’re playing. “To get where we want to be at the end of the week, we’ve got a ways to go, so I think we don’t even bother about who we’re playing,” he said. “We just start worrying about us out there, and do what we have to do to start making a couple more shots.” The Canadian men now sit in sixth place, tied with Turkey in the standings with a 2-2 record. On Wednesday, Dunstone takes on South Korea’s Yu Jin Seong (3 a.m. ET) and Denmark’s Tobias Thune (1 p.m. ET), while Fay faces USA’s Corey Christensen (8 a.m. ET, broadcast on Curlinggeek.com). Event information, including news and live scoring, are available at the event website, www.worldcurling.org/wjcc2016 As well, selected games will be streamed live on the World Curling Federation’s Youtube channel, www.youtube.com/WorldCurlingTV