A program that has introduced kids across the country to the sport of curling crossed a significant milestone today at the Tim Hortons Brier in Ottawa. 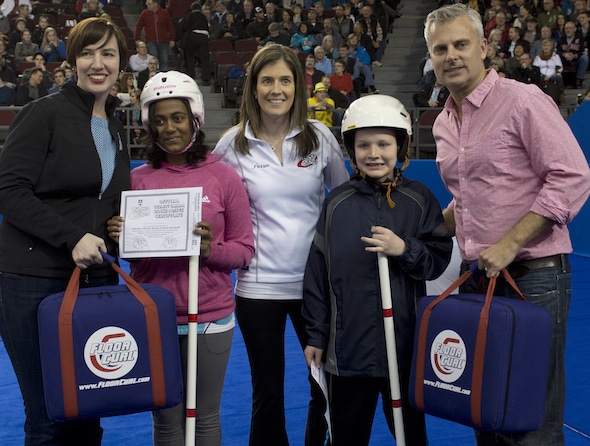 Owen Sharman, eight, of Orleans, Ont., is officially the one-millionth participant in the Curling Canada Rocks & Rings program, it was announced today during an on-ice ceremony at TD Place.

Also, it was announced that Chathu Mahanama, 12, of Orleans, is No. 1,000,001 — getting the program on its way to two million participants.

Rocks & Rings was launched in 2009 by Rock Solid Productions, and since then it has been in more than 6,800 schools across Canada, using curling equipment that has been adapted to gymnasium surfaces, but closely simulates on-ice conditions, to give kids a fun and realistic introduction to the Roaring Game.

Partly supported by donations to the Curling Canada Foundation — the mandate of which is to promote curling and an active life to Canadian youngsters — Curling Canada Rocks & Rings has been embraced by schools and children alike, and surpassing the one-million mark is another clear signal of its popularity.

For more information on Curling Canada Rocks & Rings, or to book the program for a school, go to rocksandrings.com/

“Our goal in year one was to visit 20 schools in Toronto. It feels like it was just overnight, but 20 has become 1,400 and Toronto has become Canada,” said Chad McMullan, president of Rock Solid Productions. “The term Rocks & Rings is becoming synonymous with youth curling and we are incredibly proud to be a part of building the next generation.”

Celebrating along with Rock Solid Productions is their partner itravel2000.

“We are ecstatic about the growth of the Curling Canada Rocks & Rings Program,” said Dave Paterson, Vice President of Marketing for itravel2000. “Reaching one million participants is a significant achievement. itravel2000 is proud to be part of this great Canadian grass roots movement.”