Gold for Fay, Bronze for Dunstone at World Juniors

Canada’s Mary Fay will bring home a gold medal after defeating USA’s Cory Christensen 7-4 in the final of the 2016 World Junior Curling Championship in Taarnby, Denmark on Sunday morning. 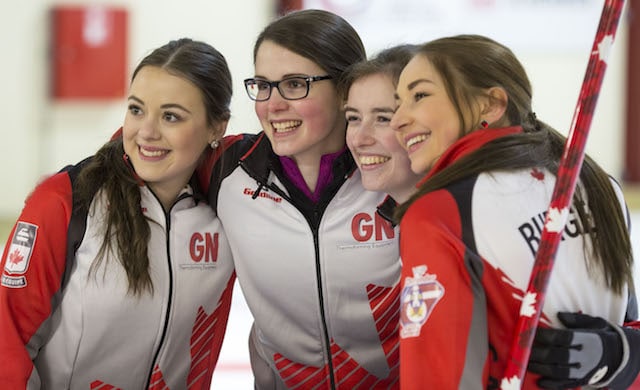 “It feels amazing to have won this with my best friends,” said the skip of the Chester, N.S., team of third Kristin Clarke, second Karlee Burgess, lead Janique LeBlanc, alternate Sarah Daniels, coach Andrew Atherton and team leader Andrea Ronnebeck. “It’s surreal and hasn’t sunk in yet, and I’m so proud of my team for all their hard work.” Canada went undefeated through the round robin, and lost only one game during the competition – an 8-7 loss to USA’s Christenson in the Page 1-2 playoff. This time it was Canada who controlled the game from the start and had a comfortable lead heading into the final end, where they ran USA out of rocks for the win. Fay is on a gold-medal winning streak, having reached the top of the podium at the 2016 Youth Olympic Winter Games a month ago in Lillehammer, Norway, with junior teammate Burgess and B.C. juniors Tyler Tardi and Sterling Middleton. The four young curlers all competed at the 2015 Canada Winter Games, representing their home provinces as well. “Last year we lost the gold medal game at the Canada Winter Games and we learnt so much from that,” said Fay. “We’ve been able to take that experience forward and we’ve also learned the importance of just enjoying the game. So we wanted to have fun.” This is the third straight gold medal for Canadian women at the world championship, an accomplishment that Fay says motivated her team this season. “I started curling when I was eight and I’ve spent all these years building up to it. But I guess last year, when we watched Kelsey Rocque (Canada’s 2014 and 2015 World Junior Champion) we thought maybe we could get to that level,” she said. “And now we’ve improved a lot, gotten stronger and more consistent, and built up our confidence.” 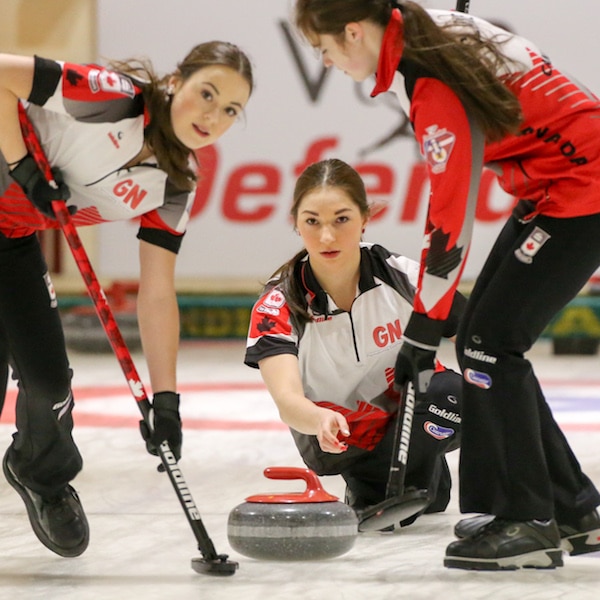 In a rematch of Saturday’s Page playoff 3-4 game, Team Canada men – skip Matt Dunstone and his Winnipeg team of third Colton Lott, second (and vice-skip) Kyle Doering, lead Robbie Gordon, alternate Wade Ford, coach Calvin Eadie and team leader Brian Chick – rebounded to defeat Switzerland’s Yannick Schwaller and claim the bronze medal. Dunstone, the 2013 bronze medallist in Sochi, Russia, was hoping to repeat Braden Calvert’s gold medal performance at the 2015 world championship in Tallin, Estonia, and bring home another gold medal for Canada, but the loss to Schwaller in the first playoff game put that dream out of reach. The Canadians made up for it by dominating their final game – stealing the first two ends and scoring easily with hammer – and winning the bronze medal with an 8-4 victory over Switzerland. “Yes it’s very much bitter-sweet,” said Dunstone after the bronze medal game.  “This medal was not what we envisioned at the start of the week  but we got up for it, it’s not an easy game to play in and I’m really proud of how the guys played today.” Even though they won’t bring home the gold medal, Dunstone says his team has much to proud of. “To be third in the world sounds good, but getting to represent your country and to be Team Canada is pretty cool in itself,” he said.  “I hope that down the line we can be proud of this, especially as we weren’t playing our best for the entire week. I think how we went about today is what we can be really proud of.” 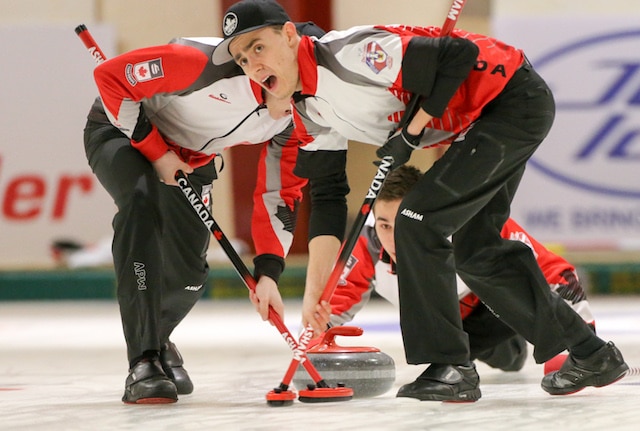 Kyle Doering calls out the weight of Colton Lott’s rock in action during the Bronze Medal game at the 2016 World Junior Curling Championships in Taarnby, Denmark (WCF/Richard Gray photo) 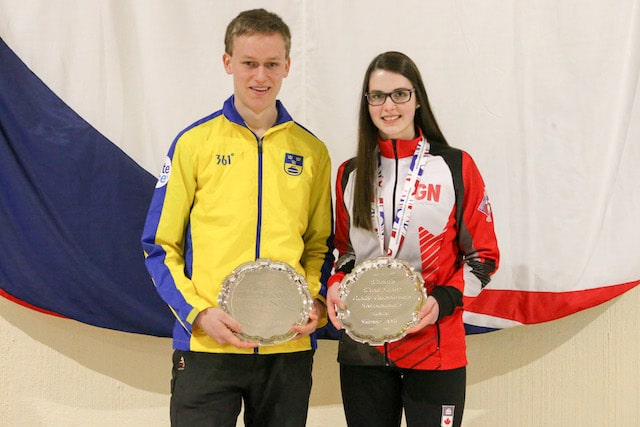