Canada closing in on playoff berth at world men’s championship

BASEL, Switzerland — Scott Pfeifer has been around some awfully good curling teams, it goes without saying. 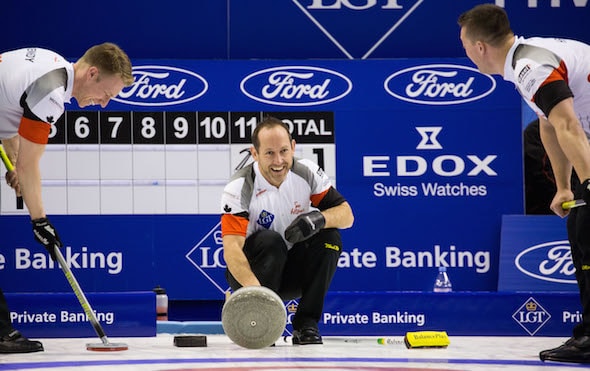 He was, after all, a three-time world champion throwing second rocks for the iconic Randy Ferbey team, so he knows a good team when he sees it.

The one he’s with now? Potentially one for the ages, suggested Pfeifer on Wednesday morning at St. Jakobshalle, moments after Team Canada’s eighth straight victory at the 2016 World Men’s Curling Championship, presented by Ford of Canada, a 9-2 thrashing of South Korea’s Soo Hyuk Kim (1-7).

He also served that role during the Koe team’s triumph at the Tim Hortons Brier in Ottawa, and being on the inside for the past month and a half has given him even more appreciation for what makes this team special.

“Curling has evolved a ton, even since I left the game five years ago — the amount of mental preparation those guys go through, the amount of communication, it’s at another level compared to when we played,” said Pfeifer, who won the 2002, 2003 and 2005 world championships with Team Ferbey. “And this team is at the leading edge. They’re playing fantastic; they’re obviously great players, but it takes a lot more than that right now to be a great team. They’re doing everything right. They struggled the one day with the ice, but they had a very good debrief, and came out the next day with guns blazing. It’s a blast watching them; it’s exciting being on the bench and being on a competitive team again.”

Against South Korea, the Canadians were in cruise control. After the teams traded singles in the first two ends, Team Canada pounced in the third, playing eight perfect shots, and then taking advantage of Korean misses to score a decisive three-ender 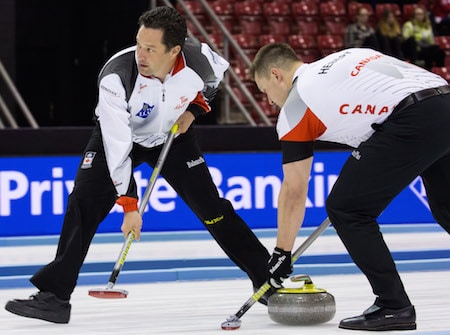 From there, it was smooth sailing as Canada improved to 8-0 — two victories clear of the field, assured of a tiebreaker and on the verge of locking down first place and a berth in Friday night’s Page playoff 1-2 game.

“When you start playing well, you don’t want to take a step backwards and then you start to question your confidence with some tough matchups coming up,” said Koe. “But the guys threw it good, and it’s nice to get through that one, and now we have a few tough games coming up.”

The Canadians next have a much-anticipated showdown at 8 a.m. (all times ET) with reigning world champ Niklas Edin of Sweden (4-3), who broke out of the gates with four straight wins before losing three straight.

“They’re very streaky — even when it looks like they’re not playing well, all of a sudden they can go off and win an event,” said Koe of the Swedes. “Hopefully we can get a jump on them and hopefully keep them down, but we’re not expecting them not to play well, that’s for sure.”

On Thursday, Canada closes out the round robin with games against Norway’s Thomas Ulsrud (6-2) at 3 a.m. and Switzerland’s Sven Michel (3-4) at 1 p.m.

Pfeifer, it should be noted, has some unfinished business in Switzerland. In his first trip to the world championship with Team Ferbey, in 2001 at Lausanne, the Canadian champs lost a controversial semifinal to the host Swiss, thanks partly to three hogline violations called on Ferbey in the days of human hogline judges.

Suffice it to say, a chance to win a world title with Team Canada in Switzerland is a nice incentive for Pfeifer.

“It’s really neat to be back in Switzerland for the world championship, but the location is a little bit irrelevant,” he said with a smile. “Obviously I have a bit of a history here, and it would be nice (to win). But honestly, I just want to see the guys win and do my part.”