BASEL, Switzerland — On the fourth anniversary of Canada’s last world men’s curling title, the 2016 edition of Team Canada took a significant step toward putting an end to that dry-spell. 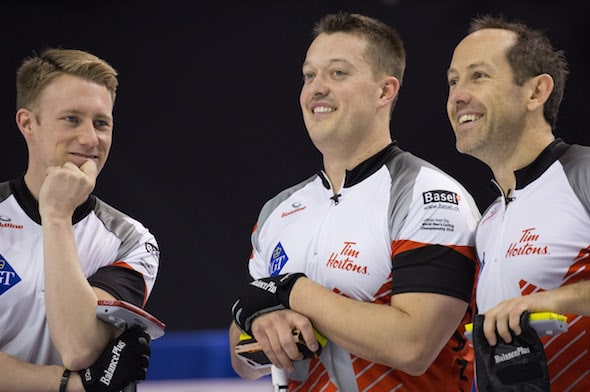 Kevin Koe’s Calgary team, featuring a member of that 2012 gold-medal team, second Brent Laing, methodically took apart a red-hot Danish team Friday night at St. Jakobshalle, putting together a tidy 5-3 win in the Page 1-2 playoff of the 2016 World Men’s Curling Championship, presented by Ford of Canada. With the victory, Koe, third Marc Kennedy, Laing, lead Ben Hebert, alternate Scott Pfeifer, team coach John Dunn and national coach Rick Lang are headed to Sunday’s gold-medal game (9 a.m., all times ET). “It’s fun curling in these games,” said Koe, who’s looking for his second gold medal after winning with a different team in 2010 at Cortina d’Ampezzo, Italy. “You want to feel some pressure and intensity because that means you’re playing in a big game. Both teams played well, and it came down to one end, really.” 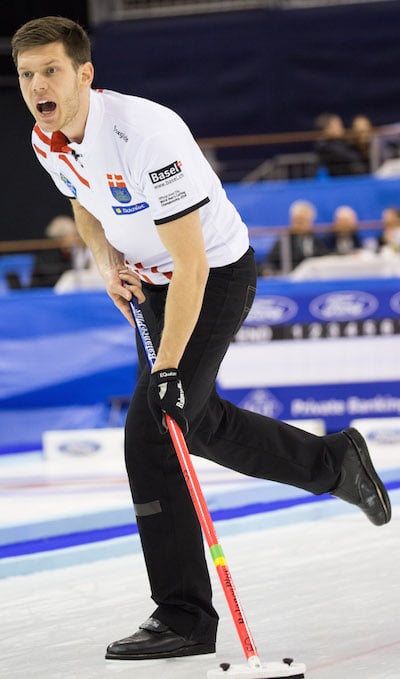 Koe and Co. did nothing flashy Friday night, nothing especially worthy of a highlight reel. They simply did not give the Danes an opening all evening, and on the one occasion that Danish skip Rasmus Stjerne did slip up, with his final shot in the seventh end, Koe was ready to pounce. After Koe made a wonderful inturn draw to the top of the button to sit two behind a pile of rocks with his first, Stjerne was unsuccessful in moving either Canadian counter. Koe then went out wider with his inturn draw to grab a piece of the button for a game-turning third point. “It was an extremely difficult shot,” acknowledged Laing. “He had to draw dead teeline, beside our rock. But he’s made those all year. You know he’s always going to be close, and then it’s in our hands. But Ben and I had a quick chat before Denmark threw its last shot (in the 7th); we said they could make it tough on us, but we’re going to have that draw, so let’s make it. Fortunately we judged it right and made it.” It was all Canada would need to reach Sunday’s final and land Denmark — which has two bronze medals, and none since 1990, to show for its 39 trips to the world men’s championship — in the semifinal Saturday at 1 p.m. (TSN 1/3). Denmark will play the winner of the Page 3-4 playoff between John Shuster of the United States and Yuzuke Morozumi of Japan (8 a.m., TSN 1/3/4). “I didn’t really feel that was going our way,” said Stjerne, who beat P.E.I.’s Brett Gallant for the gold medal in the 2009 world juniors at Vancouver. “They played really confident and they didn’t leave us anything.  It was just one of those games, the first ones to score two was going to make the pace, and they scored three, which was even worse. We just need to play better and don’t get too fussed about that.” Canada, meanwhile, can focus on its day off Saturday to prep for Sunday’s quest for gold. 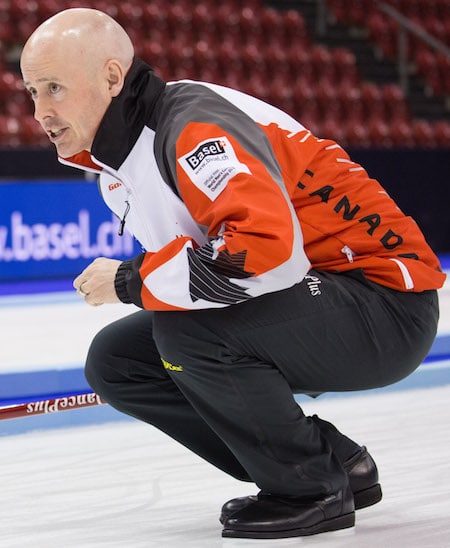 “We’re playing well, and I have no problem with a day off,” said Koe. “We’ll have a good practicetomorrow, hang out with our family and friends and just relax. Just take ’er easy and be ready forSunday.” It was in this same arena four years ago that Laing combined with skip Glenn Howard, third Wayne Middaugh and lead Craig Savill to claim Canada’s leading 34th gold medal. Four years between gold medals may not be a long time for other curling countries, but for Canadians it’s an eternity. More pressure for Team Canada? Not really, said Koe. “I don’t know; I think we put a lot of pressure on ourselves,” said Koe. “This is a chance to be a world champion again, and those opportunities are just so few and far between, especially trying to get out of Canada. So obviously we want to win for Canada, to get another gold, but it’s a great chance for us to win again for the team to cap off a great year.” “Would we like to be the team that beats the little skid that Canada’s been on? Sure, absolutely,” added Laing. “But we don’t feel that pressure.” For Team Canada updates, go to www.curling.ca. Follow us on Twitter, @curlingcanada. For live scoring, standings and team lineups from the 2016 World Men’s Curling Championship, presented by Ford of Canada, go to: https://www.worldcurling.org/wmcc2016 The French version of this story will be posted as soon as possible at https://www.curling.ca/?lang=fr