Playoffs got underway at the 2016 World Mixed Doubles Curling Championships, and it was a tough day for Canadians Marliese Kasner and Dustin Kalthoff, who lost a heartbreaking 6-5 quarter-final to Scotland on Friday in Karlstad, Sweden. 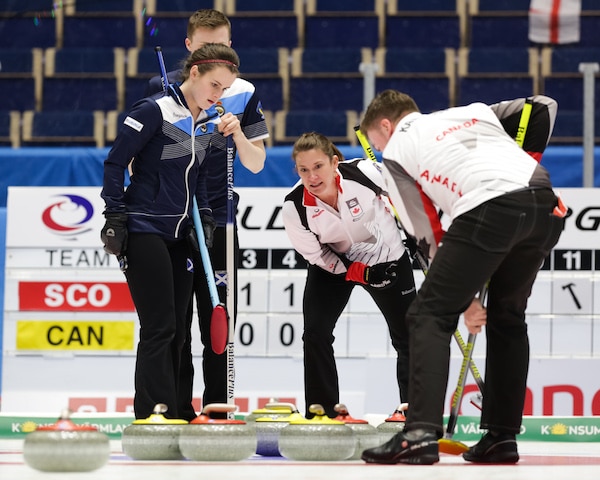 “They played a very good game,” said a disappointed Kalthoff after the loss. “I had to bring a better game, personally.” It was a tight game throughout, with Scotland’s Bruce Mouat (2016 World Junior champion) and Gina Aitken (2015 World Junior silver medallist) continuously forcing Kasner and Kalthoff into making difficult shots. The Canadians scored three in the fifth, but fell behind 5-4 after six. They attempted to generate offence using the Power Play option in the seventh, but were only able to score one on a draw to the button by Kasner. In the eighth, with the game tied and two Canadian rocks in the four-foot, Aitken made the double to score one for the 6-5 win. Kasner and Kalthoff won’t be on the podium, but they will continue to compete in the classification round, with points for World and Olympic standing on the line. After such a strong week, the elimination from playoffs is crushing, and refocusing will be difficult, said Kalthoff. “That’s a good question,” he said when asked about how he and Kasner will go about regrouping. “I’ll be talking to our team leader (Jim Waite) and coach (Jeff Stoughton) and discussing how best to approach that. Obviously (we have) no experience needing to do that before. A night off will definitely help, and then (we’ll) put our best effort out there tomorrow.” In one of the shocking results of the day, Ireland’s Alison and Neil Fyfe eliminated Dorottya Palancsa and Zsolt Kiss of Hungary from A-side playoff competition. Alison Fyfe made a spectacular double to score two in the final end for a 10-8 win over the two-time (2013, 2015) champions. Saturday’s games are at 6 a.m. (ET), with classification round and medal games at 10 a.m. (ET). Go to the event website, https://www.worldcurling.org/wmdcc2016, to see the games and broadcast schedule. You can also find live scoring, the schedule and team lineups.