Earlier this month, the 2016 Optimist International Under-18 Curling Championship took over the Jasper Place Curling Club in Edmonton. The Saskatchewan men’s and Manitoba women’s teams recently took home the gold medals in this annual event that provides an opportunity for young curlers to develop their competitive skills against teams from across Canada and beyond. 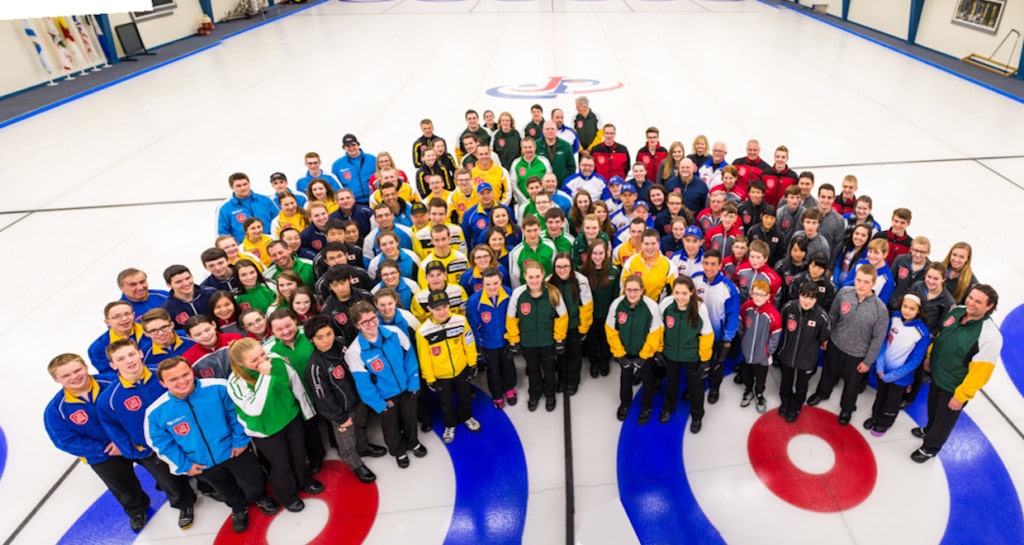 The Steering Committee (currently Bill Hans, Eric Bundgaard, Al Kersey, and Paul Bourque), started the Optimist International Under-18 Curling Championships in 2001 as part of Optimist International’s commitment to helping youth. Both the 2015 and 2016 event were co-hosted by the Jasper Place Curling Club, run by Cathy Craig, and the Saville Community Sports Centre, represented by Karla Ishida, in Edmonton. In its 16th year, the Optimist Under-18 International Curling Championship is unique in that men’s and women’s teams represent the Canadian provinces and territories, but also come from the United States and Japan. This year, the curlers attended a development camp before the main event, and were coached by high performance curlers and coaches including Kelsey Rocque, Dana Ferguson, Danielle Schmiemann, Mick Lizmore, Don Bartlett, Jules Owchar, Gary Coderre, and Cathy Craig. Additionally, Kelsey Rocque, an Optimist Under-18 past participant, past Canadian Junior and World Junior champion, and current CIS/CCA Curling champion, delivered the first stone during the opening ceremonies and presented the keynote address at the popular Saturday night banquet. In the women’s event, two teams went through undefeated after the five draws: New Brunswick in the A pool and Manitoba in the B pool. For the men’s teams, Saskatchewan was undefeated in the A pool and Quebec topped the B pool at 4-1. In this event, all teams play in the playoffs to decide the top 12 World Under-18 seeds. The men’s final gold medal game between Saskatchewan and Quebec went to an extra end after Saskatchewan skip Mitchell Dales was heavy on a draw against two. He made up for it in the extra end, however, drawing against three to seal the win and take home the gold medal. This will be 18-year-old Dales’s last Optimist Under-18 event. 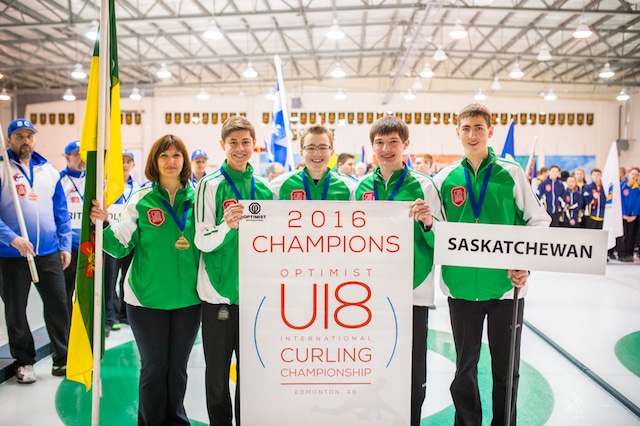 “It’s been a blast!” he said about this unique competition. “We’ve had a lot of fun here. It’s so much fun to play against international teams. I think it’s a new thing to do and it’s different. Before our Juveniles started we actually had a chance to play against Anna Sidorova [Women’s Team Russia] so it was a good warm-up game for this event.” Because he’s “aged out” of the Under-18 competition, Dales has set his sights on the next challenge: “Our focus is Canadian Juniors next year.” In the women’s event, the two undefeated teams, Manitoba and New Brunswick, faced off in the final. Manitoba skip Mackenzie Zacharias and her team were in control most of the way, finally allowing New Brunswick to score a deuce in the seventh end after a series of blanks and singles by Manitoba. The eighth end ended in early handshakes, with Manitoba capturing the gold medal with a score of 3-2. 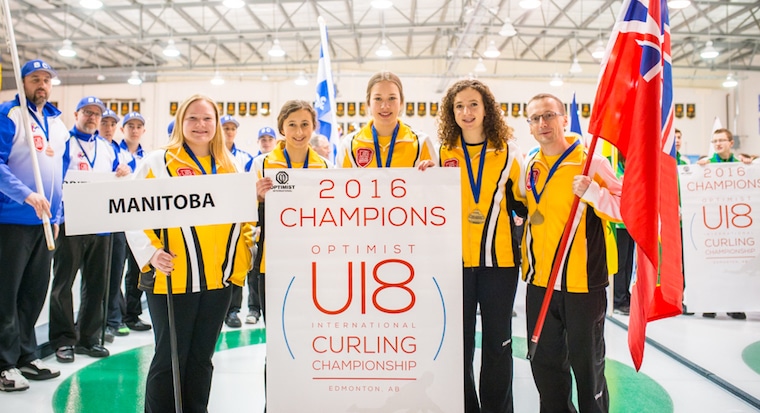 Curling in Canada is a treat for the international competitors as well. Seventeen-year-old Christine McMakin, skip for the Minnesota women’s team and 2016 World Women’s Junior Curling Championship silver medallist, has been an Optimist Under-18 competitor five times. “It’s just nice to see new competition because in the States there’s so few curlers,” she said about having the opportunity to play against new teams at the Optimist each year. “We play against the same people all the time so we get to know each other’s habits and then when we get to higher levels like the Worlds, we don’t know how to play against people we’ve never played against.” This Under-18 event also helps develop the sport in places where high-performance curling isn’t as widespread. Wendy Miller was at this year’s event as the coach for the Northwest Territories women’s team. She played on Kerry Galusha’s Northwest Territories team for four years, attending the 2011, 2012, and 2013 Scotties Tournament of Hearts, and she was excited about finally being certified as a coach and attending this first event as a team. Miller stressed how important an under-18 event is for the development of junior teams from the Territories. “There’s not a lot of junior teams in the north, so they play adults: we play in the Thursday night league and we play people like Kerry (Galusha, skip of Team NT at the 2016 Scotties Tournament of Hearts) and Jamie (Koe, skip of Team NT at the Tim Hortons Brier). So it’s nice to be here and play other junior teams,” said Miller. “I think that’s really great for (the young curlers) because they don’t have many people their age that are pumped about curling that they can really relate to. So then they come here and they look around and they see all these other young people enjoying the sport and I think that really gets them excited.” Miller also stressed the significance of having curlers like the Koe siblings to look up to as role models and inspiration. 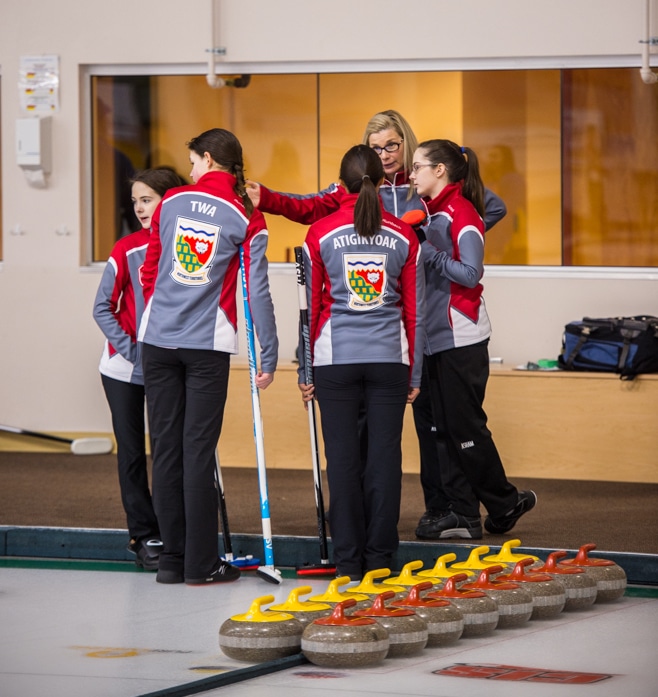 “Kids in the north are getting interested in (curling). They see it on TV. People know who (2016 World Champion) Kevin Koe is. They see him on TV, they know he’s from the North, and everybody from the North feels like they’re friends with Kevin Koe,” she said. “There’s so much support for our own teams and they also see him doing well and I think kids in the north actually think that ‘maybe that could be me someday, maybe I could be that team’, so it inspires them to go out and play.” Next year’s competition may have a different look: Member Associations across Canada will be presented with a proposal for Curling Canada to introduce an Under-18 championship, an idea that will be discussed and voted on at the Annual General Meeting this June in Cornwall, Ont. (Story by Lisa Shamchuk)