Team Canada couldn’t have asked for a better way to start its campaign at the 2016 World Mixed Curling Championship. 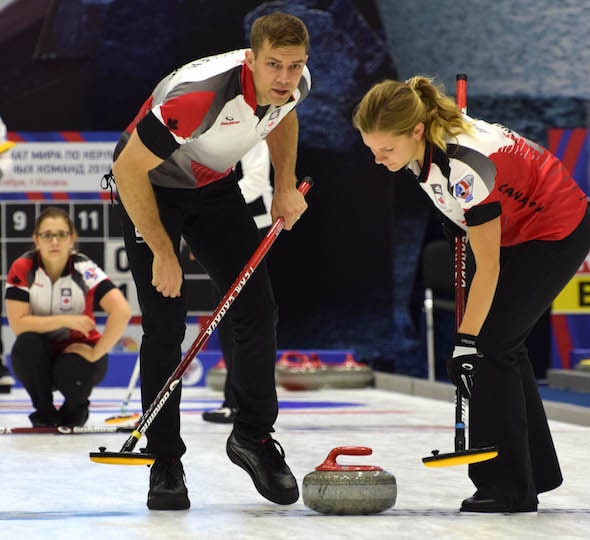 Mick Lizmore’s Edmonton team (rounded out by third Sarah Wilkes, second Brad Thiessen, lead Alison Kotylak and coach Melissa Soligo) rolled to a 9-2 win over Fred Maxie’s U.S. team in the opening round of the 2016 World Mixed at the Sports Palace in Kazan, Russia.

Maxie may be familiar to Canadian curling fans; he was a member of Ed Lukowich’s Alberta team at the 1994 Brier in Red Deer, Alta.

“You see that (Canada-U.S.) rivalry a lot in hockey and I think with curling it still holds,” said Lizmore after the game. “It was nice to play them out of the gate, a marquee matchup as far as they’re our neighbours to the south.”

It was Maxie’s team that actually hit the scoreboard first, being forced to a single with hammer in the opening end.

But it was Canada all the way from there on. The Canadians scored a crushing five in the second end, stole one in the third and two more in the fourth and never looked back.

The teams traded single points in the fifth and sixth ends before the gloves came off for handshakes.

“We were really solid,” said Lizmore. “We felt pretty good in practice there. We had a couple of itchy moments in the first end but after that we settled in and caught some breaks in the second end there to catch a five and once we put the five on the board we were a little more comfortable.”

The team arrived in Russia earlier this week and had a day of sightseeing before getting down to business on Friday.

“Kazan is really good,” said Lizmore. “We’ve had a chance to go and see the Kremlin and a few of the sights. We got a chance to tour around the city, and try some of the food. It’s really neat to be in a different country. With the exception of Sarah we’ve never been to Russia before so we’re enjoying it.”

Canada is in Group D at the 37-team World Mixed, along with the U.S., France, Latvia, Austria, Belgium, South Korea and Andorra.

Canada returns to action Saturday at 1 p.m. ET against France.