It was a battle, but in the end Team Canada came up just short, losing to Scotland 6-5 in quarter-final action and ending their undefeated run at the 2016 World Mixed Curling Championship today in Kazan, Russia. Edmonton’s Mick Lizmore – backed by third Sarah Wilkes, second Brad Thiessen, lead Alison Kotylak and coach Melissa Soligo – finished the round robin with a perfect 7-0 record and defeated Czech Republic’s Jakub Bares 6-2 in the round of 16 earlier in the day. But with their first loss of the competition, Team Canada will not move on in the playoffs. 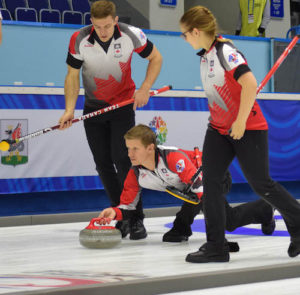 In a tense quarter-final on Friday night at the Kazan Sport Palace, Canada got off to a shaky start, giving up a steal of two. But Lizmore battled back in the second with a pressure draw against two Scottish counters for a single and followed that up with a steal in the third to tie the game 2-2. Leading 5-4 heading into the eighth, Lizmore came up heavy on his final draw, leaving Scottish skip Cameron Bryce a shot for two, and the 6-5 win. Scotland, Sweden, Russia and South Korea will now advance to the semifinals on Saturday at 2 a.m. ET. The gold- and bronze-medal games will take place at 7 a.m. ET, with broadcast and live-scoring on the World Curling Federation website, here. Canada was hoping to improve on its result at the inaugural World Mixed Championship last year in Berne, Switzerland, where Max Kirkpatrick’s team from Swift Current, Sask., was also knocked out in the quarter-finals after going 6-2 in the round robin.