So even though his North American side currently enjoys a 14-10 bulge in the overall standings in curling’s version of the Ryder Cup, it’s worth noting that his team trailed by the exact same margin at the exact same point of the 2016 edition in the exact same Orleans Arena, and rallied over the final four rounds of competition to prevail by a single point.

“We have to continue to play hard and know that every point counts, for sure,” said Lang on Saturday morning following two more Team North America victories in mixed doubles competition. “We saw what happened last year when we were down by four points after the Saturday mixed doubles draw and came back to win.”

Another twist to the draw was the lineups were juggled after the fourth-end break of each game, to ensure every player in the competition had a chance to play mixed doubles.

On Sheet A, the North American pairing of Vicky Persinger and Kevin Koe built up a big early lead on Franziska Kaufmann and Johnny Frederiksen, and then Braeden Moskowy and Monica Walker finished off a 14-6 win over Binia Feltscher and Oliver Dupont. 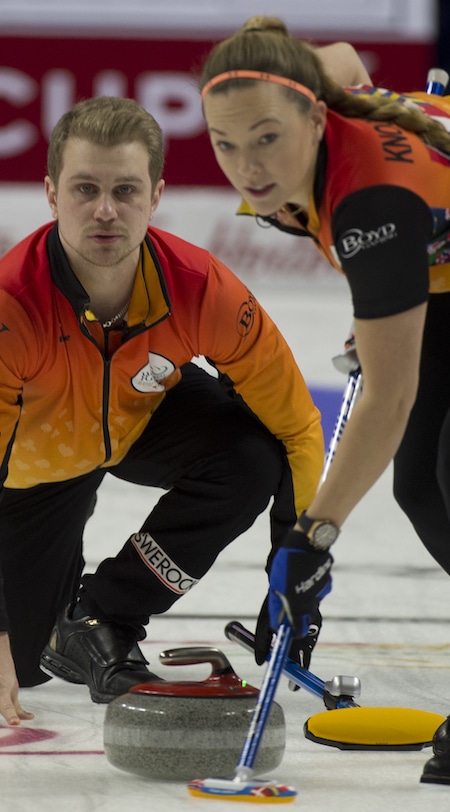 Over on Sheet C, North America’s Alex Carlson and Derek Samagalski finished off a 10-2 win over Satsuki Fujisawa and Torger Nergård; Laine Peters and Tom Howell led off for North America while Chinami Yoshida and Håvard Vad Petersson started off for Team World.

The lone Team World victory was an 8-1 triumph that was finished off by Sofia Mabergs and Niklas Edin over Chelsea Carey and Colin Hodgson. Agnes Knochenhauer and Rasmus Wranå got the victory started against Amy Nixon and Heath McCormick.

“It’s been a good couple of days for us so far, and you definitely want to be in the lead going into the weekend,” said Samagalski. “Hopefully we’ll build on the momentum, have a big day on Sunday and bring home that Cup.”

Team World, though, has plenty of ammunition left in the arsenal, especially with 30 of the 60 available points on the line in Sunday’s two rounds of skins competition.

“We need to have a big discussion now on how to approach the rest of this event if we’re going to have a chance of winning,” said Edin. “But the skins tomorrow, we know that anything can happen — we’ve seen that before. We just have to focus on making more shots and making it tough on our opponents.”

Also on Saturday, the captains and coaches for both teams will announce their lineups for Sunday’s two skins draws, where 30 points will be up for grabs.