Rocque will play for gold at 2017 Winter Universiade

Team Canada’s Kelsey Rocque earned a chance to play for the gold medal after defeating Sweden’s Isabella Wranaa, 7-4, in semifinal action at the 2017 Winter Universiade in Almaty, Kazakhstan, on Monday. 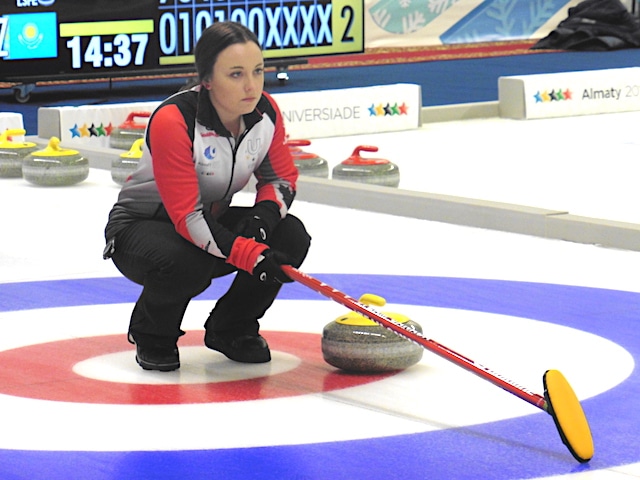 Team Canada skip Kelsey Rocque keeps her eyes on the rock coming down the ice at the 2017 Winter Universiade in Almaty, Kazakhstan (Marc Bartschat photo)

Rocque and her University of Alberta team, which includes vice-skip Danielle Schmiemann, second Taylor McDonald, lead Taylore Theroux and coach Garry Coderre, entered the playoffs after finishing the round robin in first place. They carried that momentum into the semifinal against fourth-place Sweden, taking the lead early and then running the Swedes out of rocks in the tenth to claim their spot in the championship final against Russia’s Victoria Moiseeva. “It’s pretty crazy,” said Rocque after the game. “I can’t say enough about the girls. They’ve been playing amazing all week and it’s a huge part of the reason we’re in the Universiade final. We’re very excited to bring home a medal for Canada. Hopefully it’s gold, but regardless, we’re very proud of what we’ve accomplished this week. We played pretty well today. We got the breaks when we needed to. It was a solid win against a really good team, and it gives us even more confidence heading into the final.” The rest of the team clearly shared in Rocque’s excitement. “We’ve have a long journey, a long road together as a team,” said lead Theroux. “To be in this position is a huge milestone in what we’ve done individually as curlers, and also as a team.” “We’re definitely peaking at the right time,” added third Danielle Schmeimann. “We’re comfortable in this environment. We’re really getting along well. We’ve had a lot of fun this week and I think that’s helped a lot. We’re very excited for tomorrow.” “It’s very exciting. We’re very proud of how we’ve played this week, and now we’re happy to play for the gold medal,” said second Taylor McDonald. “The girls came out with a mission,” said coach Coderre about his team’s mindset heading into the all-important semifinal. “They knew they had to play very well because that young Swedish team is very talented. The girls stuck to their systems and strategies. It just proves that the system works.” Rocque opened the game with a blank, and after taking a single in the second end, stole a point to go ahead 2-0. Leading 6-2 after seven ends, Canada had complete control and didn’t give Sweden a chance to get back in the game. “I’m extremely proud of them,” added Coderre. “I’m trying not to show it on the outside, but I’m just beaming inside right now. We still have one important game to go but, either way, we’re proud of what we’ve accomplished at the Games. Tomorrow, we’ll just have to keep doing what we’ve been doing. We’re a team that doesn’t live in the past. We have to play in the now, and the girls will be ready to go.” The women’s gold-medal game will take place Tuesday morning (Monday 10 p.m. EST). Wranaa will play Switzerland’s Briar Huerlimann for the bronze on Monday. Huerlimann lost to Moiseeva 8-7 in the other women’s semifinal. On the men’s side, Aaron Squires and his Wilfrid Laurier Golden Hawks team of vice-skip Richard Krell, second Spencer Nuttall, lead Fraser Reid, alternate Russell Cuddie and coach Jim Waite finished the round robin in fifth place, tied with South Korea and the United States, and did not advance to the playoff round. Canada has won numerous medals over the years, but is searching for its first gold medal since Brittany Gregor captured the women’s gold in 2007 at Pinerolo, Italy. Most recently, Breanne Meakin, won women’s silver in 2015 at Granada, Spain. Live scoring will be available on the official event website, almaty2017.com/.