Kelsey Rocque and her University of Alberta team – vice-skip Danielle Schmiemann, second Taylor McDonald, lead Taylore Theroux and coach Garry Coderre – are coming home with a gold medal after cruising to an 8-3 win over Russia’s Victoria Moiseeva in the women’s curling final of the 2017 Winter Universiade in Almaty, Kazakhstan on Tuesday morning. 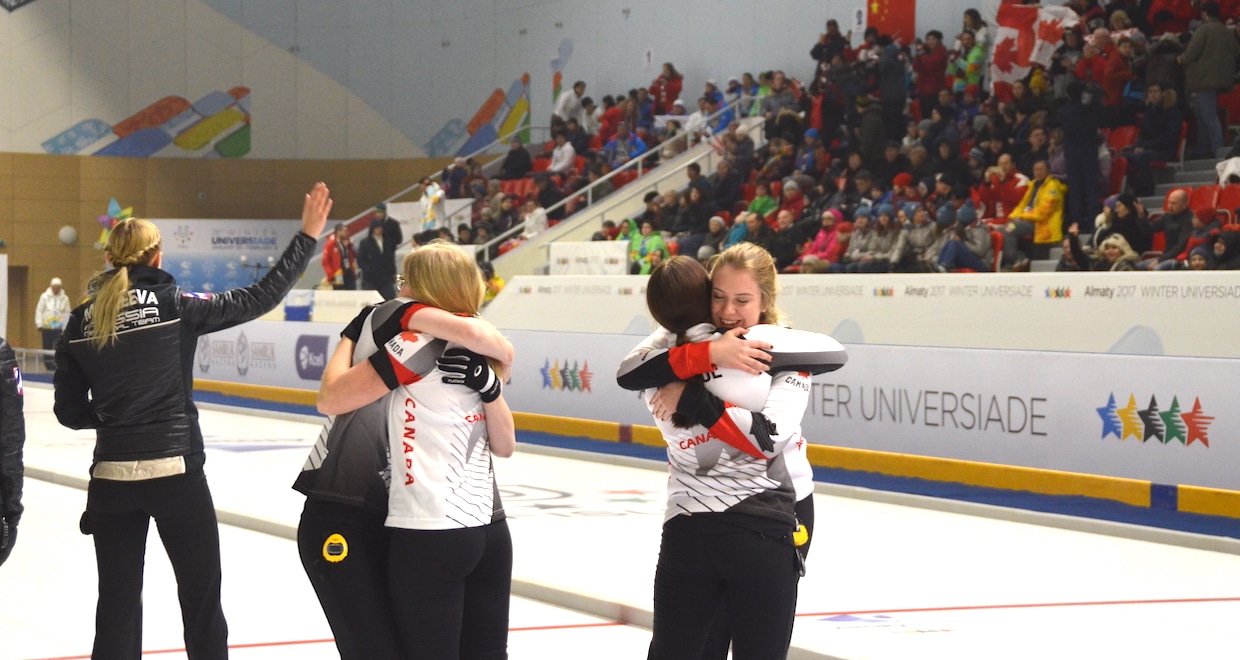 “We knew coming in that every game was going to be really tough,” said Rocque after the post-game celebration. “To play this consistently all week and to come away with a gold medal for Canada, I can’t put it into words. It’s unbelievable. I’m just so lucky to be standing next to these girls and Garry. “I think we kept our last couple of games best for last, not just the gold-medal game,” she added. “We played really well the last five or six games. We’re really proud of our performance.” Rocque controlled the championship final from the start, kicking off with a blank in the first end, scoring a deuce in the second, then stealing two more points in the third after Moiseeva’s final draw against two came up short. With a 5-1 lead at the break, Canada continued to force the play, hitting their way out of trouble whenever the Russians were able to get some offence started. By the ninth end, leading 6-3 and not missing anything, the Canadians had the gold medal in their sights, and when Moiseeva’s final draw didn’t make the rings, it time for was handshakes. “I don’t know where to start,” said lead Taylore Theroux. “This has been a wonderful week. The crowd was amazing. We had a great time with them cheering us on. I can’t believe we just won. We did it!” “It’s kind of a surreal feeling,” said second Taylor McDonald, who plays with Rocque on her women’s World Curling Tour team. “We knew what we were doing out there. I’m very confident in my three teammates and our coach. I’m so happy to have this gold.” “I couldn’t ask for better people to have standing beside me,” said Vice-skip Danielle Schmeimann, whose strong hitting ability played a big role in the win. “It was a really good week of tough competition and it feels really good to pull it off.” “I can’t even express how proud I am of these girls,” added Coderre. “They worked really hard all week. Just to see the smiles on their faces, it’s just great. There’s probably going to be a little celebrating going on later today.” 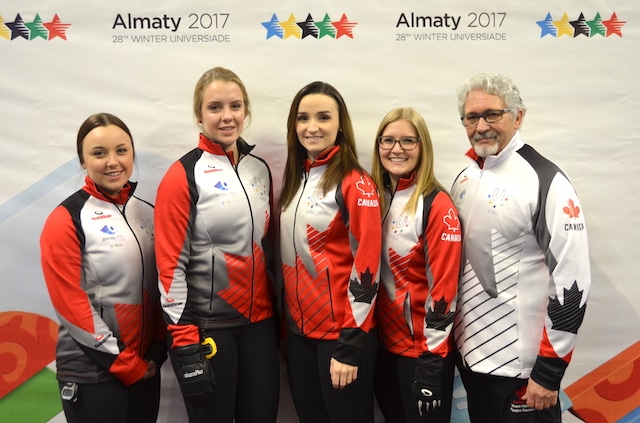 Sweden’s Isabella Wranaa, who is coached by former Team Rachel Homan second, Alison Kreviazuk, won the bronze medal after defeating Switzerland’s Briar Huerlimann, 6-3. On the men’s side, Aaron Squires and his Wilfrid Laurier Golden Hawks team of vice-skip Richard Krell, second Spencer Nuttall, lead Fraser Reid, alternate Russell Cuddie and coach Jim Waite finished the round robin in fifth place, tied with South Korea and the United States, and did not advance to the playoff round. Norway’s Steffen Walstad won the bronze medal with a 7-3 win over Czech Republic’s Lukas Klima. The men’s gold-medal game between Sweden’s Patrik Mabergs and Great Britain’s Bruce Mouat is scheduled for Tuesday afternoon. Canada has won numerous medals over the years, but this was the first gold medal since Brittany Gregor captured the women’s gold in 2007 at Pinerolo, Italy. Other Canadian medallists include: • Breanne Meakin, women’s silver in 2015 at Granada, Spain • Brendan Bottcher, men’s bronze in 2013 at Trentino, Italy • Hollie Nicol, women’s silver in 2009 at Harbin, China • Mike McEwen, men’s gold in 2003 at Tarvisio, Italy • Krista McCarville, women’s silver in 2003 at Tarvisio. 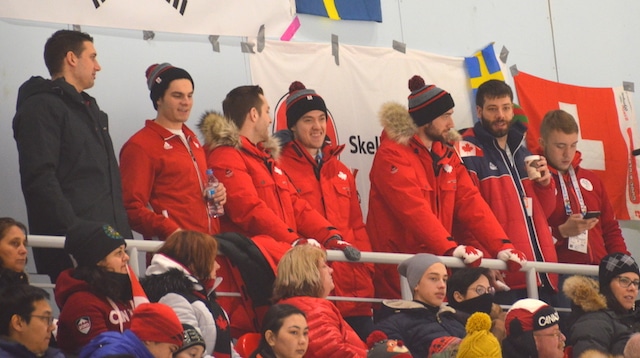 Team Canada’s Aaron Squires and the rest of his men’s team cheer on Kelsey Rocque and her team during the women’s final of the 2017 Winter Universiade at the Almaty Arena in Almaty, Kazakhstan (Marc Bartschat photo)